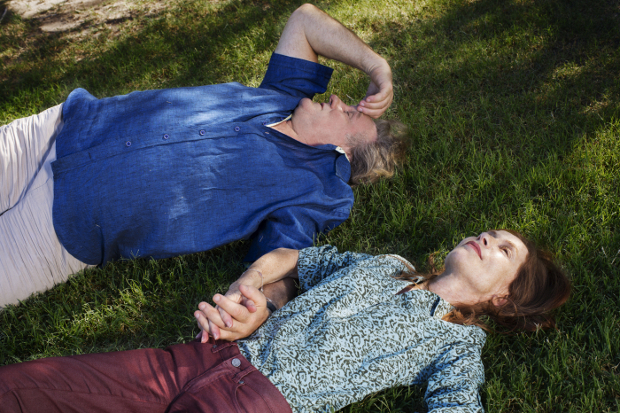 In the America-set French drama Valley of Love, Isabelle Huppert re-teamed with another icon of contemporary French cinema, Gérard Depardieu, (last seen together in 1980’s Loulou) to play an estranged couple summoned to Death Valley by their deceased son.

Do you choose projects based on the director or on the material?

I’ve always chosen my projects based on the director. It’s the key element to the construction of the building. To me, cinema is more about how you tell a story than what story you tell.

What attracted you to this particular project?

In this case, I found the initial idea exciting. Putting two characters in this immense location of Death Valley. No matter what they say it’s interesting because the situation is so peculiar. It’s almost like a chemistry experiment.

Was it also because of this intimacy between Gérard Depardieu and yourself?

There’s always a quality of intimacy in the way Gérard and I perform together. That hasn’t changed. Of course we haven’t worked together since Loulou but when we started to work on this, it was just the same.

You and Gérard Depardieu play actors called Isabelle and Gérard in this movie, which adds to our association of them with you. Do you think there’s an inherent connection between actors and their characters?

I think we pretend there’s a connection so that it looks real. If it works, you can’t make the distinction anymore. That sometimes creates a confusion as well. The views people have of me, their perception of me are necessarily based on the roles I play. They think this is the way I am as a person but of course that’s not true. Such is the paradox of acting. Jean Cocteau famously said “an actor is a liar who tells the truth” and that’s exactly how it is.

Was everything scripted in this film or was there some improvisation?

It was very much scripted but you know, as my great friend Bob Wilson said, acting is by definition improvisation. Improvising doesn’t mean inventing but you always improvise. Talking to you in this moment, I’m improvising. Of course in certain films you do more improvisation in the sense that you actually make up the text, which is not the case in this one. We didn’t change a word, a comma.

How did you find Death Valley?

I had been there as a tourist before, but it’s completely different being there for three days or three weeks. It’s quite an inferno. You feel like you’ll never survive three weeks there. The heat never lets up, not even at night. The water never gets cool, the pool is always hot, there’s just no escaping it. So it’s quite special, and I think it inspires the actors, working under such extreme conditions.

The idea of spirituality is so personal. You can have a spiritual experience listening to a piece of music or looking at a painting. It takes so many different shapes with different people. I do hope that everyone – in their own way – has access to spirituality because that’s what makes life worthwhile, but you can’t really define it like something theoretical, because it’s very personal. It’s such an intimate relationship between oneself and a sense of life. At least it is for me.

What’s your take on the complaint of lack of female filmmakers in America?

We have so many female filmmakers in France! In general, cinema is probably still male-dominated, but I would say most of the time, female filmmakers make more daring choices and are more concerned with subtlety. They may be faced with more challenges, but something good always comes out of being challenged.

You have worked with such varied filmmakers as Joachim Trier, Michael Haneke and Hong Sang-soo. What makes them good storytellers?

They’re all unique. Doing that movie (In Another Country) with Hong Sang-soo in Korea, for example, really teaches you that cinema can be so big and it can be so small too. We shot the movie in 10 days and I loved it. I think he’s a genius. So cinema is about this capacity for variety and I think these great directors reflect those possibilities.

What can you tell us about your next collaboration with Michael Haneke?

I can’t tell you anything – I don’t think he would like it. But yes, we’re doing another film.

What do you think makes your work together so special, so… irresistible?

I would say simplicity, there’s something easy about the way we work together. Something very unsentimental. That would be his mantra – no sentimentalism. Which might also be the reason why people sometimes think I play sad characters. Acting without sentimentalism isn’t the same as acting without emotion though. I think my character in The Piano Teacher is quite emotional, but she’s never sentimental. So Michael and I really see eye to eye on that. And he doesn’t hesitate to portray people in certain ways. He doesn’t like soft characters, he has a certain vision of the world and of life. All of which I find interesting.

Valley of Love opens in Berlin cinemas on January 21. Check our OV search engine for showtimes.