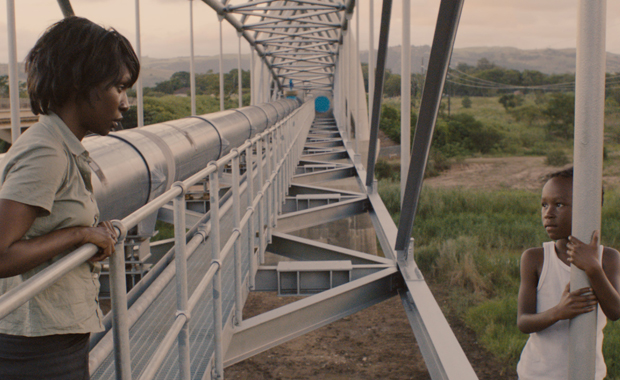 Pia Marais’ Layla Fourie is the Johannesburg-born filmmaker’s third feature after the festival success of The Unpolished (2007) and At Ellen’s Age (2010).

Presented earlier this year at the Berlinale’s Competition section, where it won the Jury Special Mention Award, the film screens in German cinemas this month (from July 4). The titular Layla (Rayna Campbell) is a black single mother who finds work as a polygraphist in a casino in South Africa’s inland East Coast in order to support herself and her young son Kane (Rapule Hendricks). However, the two soon find themselves involved in an accident, the consequences of which threaten to undermine not only Layla’s livelihood but also her moral stature. Shooting for the first time in her homeland, Marais’ exploration of a co-dependent mother-son relationship set against a backdrop of mistrust and surveillance in post-Apartheid South Africa takes a nuanced look at the possibilities and limitations of trust and reconciliation.

What inspired you to focus your film on truth and surveillance? What value do they have in contemporary South Africa and beyond?

In 2006 I was in South Africa doing research for a documentary that never came about but which led to Layla Fourie. The research, which was very much focused on the prevailing paranoia and security industry, brought me in touch with a small company providing polygraph testing. As it turned out, most of their work was to do pre-employment tests for companies seeking to employ people. But it goes even further. It is not uncommon for couples to have each other tested before they get married or even during the course of a relationship. It seemed to me that people had lost trust in their own intuition and were relying on instruments to decide if they would trust another person.

I guess after Apartheid the security industry has boomed, as people don’t rely on the police. People take all sorts of precautions to try and avoid becoming a victim of crime. The polygraph business is just a part of it. It’s as if Apartheid has mutated into a different form. It is no longer about the color of your skin but far more about wealth versus poverty. Leisure time is spent in malls and casinos simulating Venice or Provence with skies painted on ceilings above the armed security. Generally, I think that although this film reflects a certain state of mind in South Africa, it is perhaps more universal if one thinks about how we as the “First World” use similar measures to protect ourselves from the “Third World.”

But essentially it is still a film about a young mother struggling to do the right thing and protecting what she loves the most: I wanted to make a contemporary film about the country and I think that is essentially what Layla Fourie is.

Who is Kane and what is his role in the development of the film?

I think Kane is the heart of the story. He’s a pragmatist. He needs to survive and for that he needs his mother. I believe what makes us the happiest and perhaps the unhappiest is unconditional love, something probably experienced most in child/parent relationships. I think, though, that the theme of trust/mistrust is intrinsic to the relationship between Layla and Kane. Initially though, I thought of Kane as a child with incredible powers, almost like a child from a horror film. A boy that wants to control his mother completely and has an intuition that gives him the ability to manipulate her. Fortunately the young boy we found to play Kane, Rapule, was a wonderfully healthy young boy, who was sort of immune to the bad characteristics of the scripted Kane.

How was Rapule Hendricks (Kane) chosen?

It was hard. I think we did see a few thousand children. My friend Geraldine Bajard and I set up improvisation workshops for the kids to see their reactions. One day we brought Rayna Campbell (Layla); we did an improvised scene in which Layla finds Kane hanging out in a park with older boys, smoking a cigarette and bunking school. Well, Rapule pretended to be high, something he must have observed in the township, usually filled with people on “Tik” (something like crystal meth). He kept the improvisation going for about 9 minutes. It was really funny and horrifying at the same time but he clearly was having fun. That’s the moment I realized what a talent he was.

What about the arts and film in Johannesburg at the moment?

I think Johannesburg in parts is what Berlin was years back after the Wall. There is so much talent emerging out of there now, which never had the chance to before. You have incredible artists like Die Antwoord, Spoek Mathambo and of course all the Kwaito, as well as some of the most incredible contemporary photographers. Even with film, there’s stuff happening. All of this is developing and finding a voice now. The film will be screened there in July for the first time and then be released in the cinemas later in the year. It will be really interesting to see how it is received there. South Africa is actually a really exciting place to be at the moment.

Your films always offer you an occasion for self-inquiry. Are you working on a new project?

I guess the process of making a film is quite reflective. I think just the amount of time one spends making a film leads one to reflect. I am trying to take a break from that or have been since finishing Layla Fourie. It was literally finished a few days prior to the screening at the Berlinale. It all happened so quickly that afterwards I just needed a break. I would really love to make an African agent film [ed. note: spy film], although it would literally be impossible to finance. I am really interested in exploring a narrative starting from genre instead of a specific theme, as I did with Layla Fourie.