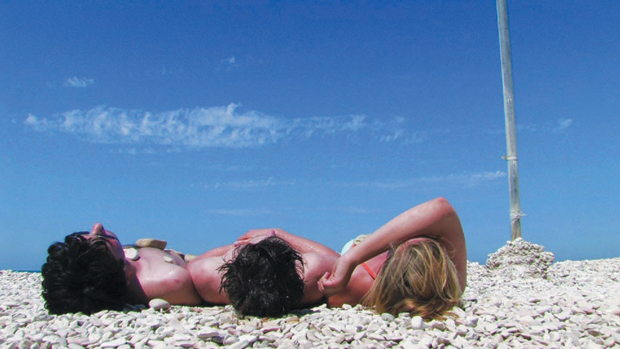 Berlin-based theatre director Marco Štorman turned his hand to cinema a couple of years ago to create the touching, beautifully shot, JuliAugust, a 52-minute drama about a love triangle between three young adults who go on holiday in Italy. The film made a splash and secured Achtung Berlin’s New Berlin Film Award for best mid-length film this year.

With very little dialogue, the film relies on telling body language and glances between the characters to convey the story and moods. A lot is therefore left to the audience’s imagination, but it isn’t difficult to fill in those gaps.

Join us at EXBlicks as we present JuliAugust on Monday, October 14 at 8pm at Lichtblick Kino. As always, the film will be shown with English subs and with the director present, as well as complimentary wine after the screening.

How did you conceive the idea that the film was going to about these young adults fooling around and experimenting with their interrelationships and sex?

As adults losing our youth, we think a lot about what was. And there’s always this angst about not being young any more, whether it’s about not being respected or just the perception that we’re running out of time. When remembering our youth, we remember our own perfect, glorified version; the youth we wanted for ourselves with all the expressions of emotion, hurt and love. I wanted to tell a coming-of-age story for adults, and capture the kind of lost youth that we start to fantasise about when we start to recognise that we’ll die.

There are a lot of really humorous moments in the film that reminded me of being young, like when the three characters were rating the attractiveness of bypassers from 0-10. What was the idea behind these?

I wanted the characters to have fun. They judge others so they don’t have to talk about themselves and their own insecurities; talking is always a way to rescue yourself from uncomfortable situations. Also it was important that I allowed the audience to create their own ideas about who’s walking past. There’s always a public around them throughout the film, but you never see them. Everything is focussed on this microcosmos of the three characters.

You all knew each other before, right?

We did a lot of theatre work together previous to this, and were used to working very closely with each other. The four of us really trust each other, and we know we wouldn’t hurt each other or create dangerous situations. And our trust helped us to get deeper into the story, deeper into the characters and deeper into the acting itself. It helped for the intimate scenes, and meant that the three actors show little signs and nuances which just wouldn’t be there if we were strangers.

Is that why you think the film carries itself along with such little dialogue?

Yeah, and we’d also worked on the characters for a long time. The movie isn’t about talking, it’s about all the things that don’t have to be said. A little move of a hand or a short view of something tells us so much more than any words could. I wanted to let the inner characters talk; their thoughts, angst and shyness. So the summer before shooting we met in a shed for a few days to create the frame of the story and start making notes about the characters. After that we met every two months for a weekend to get deeper into the characters, and create a biography for each of them.

Did anything unexpected happen during the making of the film?

The shooting style resembles a series of photographs, with the colours you use and the way the frames are held in one spot for a whole scene.

I really love the colours of the Marques. Everything seems to be in a warm yellow tone, which gives everything a sort of falseness. In terms of the frames, it was important for me to hold the characters’ moments. Our everyday lives are so fast, moments where we’re deeply fulfilled, satisfied and touched can be hard to find. So, in the film the characters are standing still, like there’s nothing but the present and no outer influence. Just one question: What do I want to be?