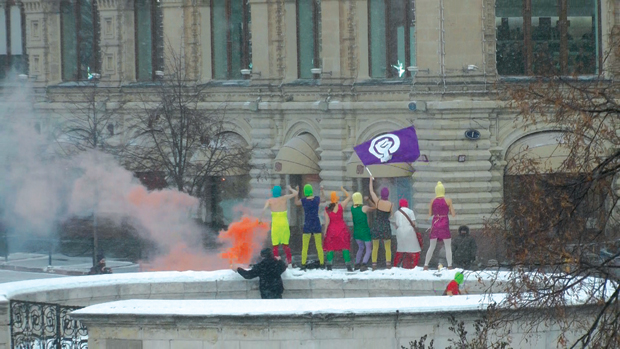 Pussy vs. Putin, the hot-button Pussy riot documentary by Vasily Bogatov and Taisiya Krugovykh, is finally being shown in Berlin on Wednesday, December 11, 8pm at the Volksbühne.

This is a film that can’t be shown in Russia. Surprisingly Pussy vs. Putin was also prevented from being screened in Berlin last August, when a local Pussy support group demanded the film be cancelled and the organisers, faced with the threat of being outed as “anti-Pussy Riot”, gave in. Since then, a selection at the Amsterdam film festival and quasi-clandestine screenings throughout Europe have turned Pussy vs. Putin into a must-see.

We talked to the duo behind the film, Moscow video artists Bogatov and Krugovykh. Both have played an active role in the Russian opposition movement from the onset by documenting demonstrations, sometimes at their own risk – Bogatov was arrested last year, after shooting the Occupy-Court action in support for Pussy Riot.

How did you get to know Pussy Riot?

Vasily Bogatov: Through our common friends from the art scene. Almost all contemporary artists in Russia know each other.

When did you actually start filming them?

Taisiya Krugovykh: From the very beginning – when Pussy Riot was launched, actually even earlier. Back then, no one was interested in them. In 2011 political actions attracted few people and few cared, really, not even the authorities. Activism was not as severely punished as it is today.

TK: By “Putin” we mean the entire system. The people who stand alongside the cage, the people in uniform, the people with the dogs… everyone responsible for bringing them to prison and making their lives inhumanly difficult.

Pussy member Katya Samutsevitch has been running an active campaign against your film. Do you know why it wasn’t shown in Berlin in August?

TK: It’s all internal squabbles – nothing to do with the content of the film. For instance, the Pussy Riot support group headed by Katya [the Pussy freed in October 2012] and Martina Steis decided to not support Nadya’s hunger strike. Basically, right now, there are two branches of Pussy Riot: Katya and co., and Nadya and Masha and co.. The latter support the film, while the former do not. Originally, the idea was to concentrate on Katya, but she told us she wanted to take part in the editing and oversee it. We realised this could turn the film into a propaganda piece, so we said no. And she said no to us. That is why she appears so little in the film. It had to be completely restructured.

Why did you take your names out of the credits, going instead by “Gogol’s Wives”?

TK: Well, we would certainly have problems within the Russian Federation, where such films are considered “extremism” – a prison term of up to five years! Beyond this, we don’t consider this film to have much artistic value. Everyone is so eager to watch it only because it is about Pussy Riot.

What is your life like right now in Moscow?

TK: We teach video art and filmmaking and take part in exhibitions. But it is getting worse and worse compared to how it was two or three years ago. Not only journalists, but ordinary people with cameras are getting arrested. Reps of the LGBT movement are being arrested or killed. Same with immigrants. We have little hope.

VB: Every week one of our friends is accused of being a criminal, arrested and deported to some prison… Nearly every second day!

Are you afraid for yourself?

TK: Everything is totally unpredictable. You can be arrested anywhere, at any time, for a totally invented reason. Everything’s so uncertain, so there is no point in fear.

Why is it important to show this film right now?

TK: First, because the film brings people together. Friendships or political contacts can come out of it. The second reason is that the film does not propagandise anything, it shows just the way it happened. It shows that some 20- or 30-year-old girls can make an actual impact on our lives.