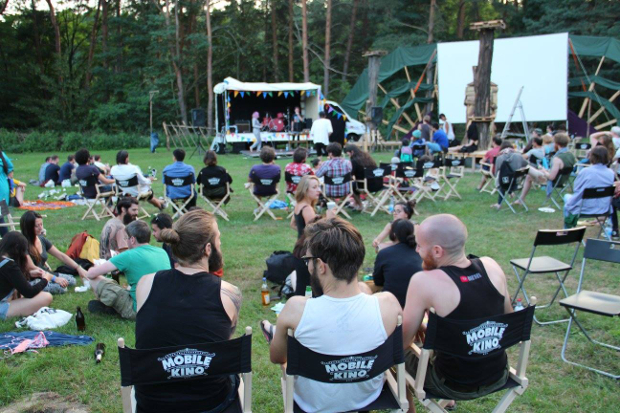 Flee the city this weekend (Aug 11-13) for the summer’s most scenic boutique film festival.

Now in its fourth year, Mobile Kino Summer Camp sees one of our favourite pop-up cinema collectives take over a former GDR holiday camp for a weekend of open-air films, food and live music, all in charmingly bucolic surroundings deep in the Brandenburg countryside. This year’s programme, which plays across three concurrently operating screens, offers a laudably diverse mix of recent festival circuit hits, many of which are yet to hit German cinemas. Kicking things off on Friday night is Alejandro Jodorowsky’s mind-bending and wildly enjoyable Endless Poetry, which sees the octogenarian auteur raking over his personal history in his own utterly inimitable style.

The event’s forested lakeside setting lends itself perfectly to a spot of late-night horror, so it’s a thrill to see Anna Miller’s The Love Witch taking centre stage on Saturday. This sumptuously stylish retro chiller, about a young witch who harnesses the occult to seduce potential male suitors, has gradually acquired a devoted cult following since it debuted at the Rotterdam Film Festival early last year.

Offbeat docs also get a decent showing. On Friday, you can catch the European premiere of Spookers, about an extreme New Zealand horror theme park located on the grounds of a former psychiatric hospital. Meanwhile on Saturday evening, those looking for a fix of cuteness can cuddle up together to watch Kedi, a heart-warming portrait of Istanbul’s astonishingly large street cat population.

If you don’t fancy taking a chance on something new, you can alternatively spend the weekend revisiting old favourites. Take a journey from the ridiculous to the sublime with a Friday double-bill of The Goonies and 2001: A Space Odyssey, or take part in an audience vote to determine which classic vampire- or space-themed movie will fill the weekend’s mystery slots.

While film is certainly the main focus, a busload of Berlin-based bands will bring the festival vibes throughout Saturday afternoon, while the catering team from Kreuzberg’s hipster emporium Hallesches Haus will be manning the staff kitchen. Tickets are still available, and will set you back €55, including camping. The site is easily accessible from Grunow station, with a free shuttle bus running all weekend. However be warned that it really is in the middle of nowhere, so be sure to pick up all your supplies before leaving civilisation.