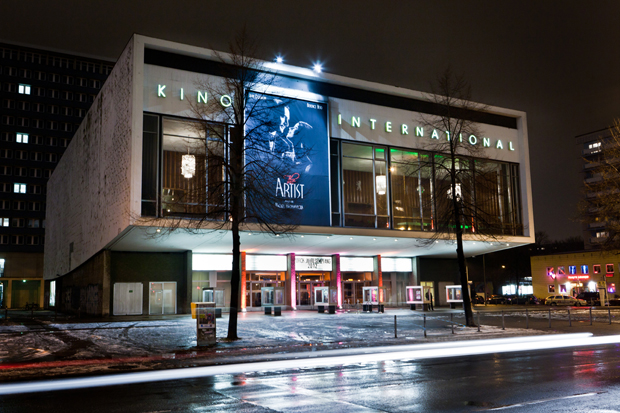 Kino International, which Swinton fairly dubs “a palace”, is something of a grand dame among Berlin cinemas. Although by no means the city’s oldest screen (Kino Movimiento and nearby Tilsiter Lichtspiele still scrap over this title), the International makes up in history and style what it lacks in age. Designed in the spirit of political openness that breathed through the east following Stalin’s death, and opened in 1963, Karl-Marx-Allee’s plushest modernist marvel played host to GDR premieres for nearly three decades.

Today shambling film buffs and glad-ragged gay revelers alike (the weekly MonGay screening also turns 15 this week) are welcomed just as warmly by the distinctive glass-walled bar with its hulking chandeliers and sprawling single screen with that astonishing rippled ceiling (acoustics, don’t you know). Somehow the occasional scuffmark or missing light bulb can’t quite mar the glamour of glass and blue velvet that opens and closes each screening, and the fact that the vast poster outside is still hand-painted by artist Götz Valien for every movie tells you all you need to know about the cinema’s sense of elegant stubbornness.

To mark its golden jubilee, Kino International will, on November 16 and 17, buff up its wood panelling, throw open its angular doors and embrace five decades of German cinema. An eight-film spread incorporates cinematic milestones from 1968 to 2005 – some banned, some revolutionary, some just plain popular – including Coming Out, the first GDR film to deal with homosexuality and last premiere held in the cinema. The film slipped onto the silver screen on November 9, 1989 just as the iron curtain was falling outside.