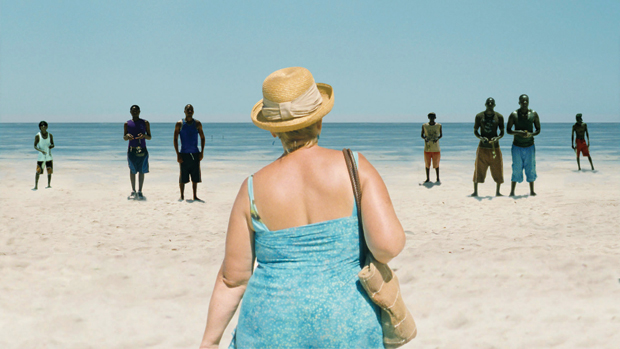 Director Ulrich Seidl on his Paradise trilogy, faith and cinema Three films, three paradises, three virtues. Applause in Cannes, a scandal in Venice, a lawsuit in Rome – Ulrich Seidl’s Paradise trilogy confronts its audience with love, faith and hope and divides the nations. Part I, Paradies: Liebe (Paradise: Love, photo), starts January 3 in Germany, and from January 19 through March 17 C/O Berlin presents an exhibition based on the trilogy. Your Paradise trilogy was meant to be one film in the beginning… I don’t think it ever happened before that someone started shooting one film and ended up with three. [Laughs] The initial topic I wanted to work on was tourism. Above all I was interested in female sex tourism, which in our society is more of a taboo than its male counterpart. And then there was also this religious topic that ended up in my drawer. Some years ago I was shooting the film Jesus, You know and I found this story on the travelling mother of God. Thus I had the second film.

In the best case, cinema is a ticket to both hell and paradise.

The third one revolves around a ‘Lolita’ topic that I had always wanted to produce. I ended up with these three stories on women and 90 hours of material. At first I made one six-hour-long film, but I realised pretty fast that it was too demanding for the audience. What part did your method of shooting in chronological order play in the trilogy? Normally a film is made by precisely planning each day of the shooting. And after six to eight weeks you are done – you cannot go back. By shooting in chronological order I can afford to pause. I can take my time to follow another idea, find a different path. It’s a progressive process; it offers you the chance to steer things in a certain direction. You grew up in a very religious family and social context. How has your idea of paradise evolved over the years? As a child, paradise was a heavenly place, something that could not be reached whilst on Earth. If you are not religious it is something different altogether; you search for paradise on earth. But of course it’s also a term that is stressed in the tourism sector. The trilogy is also about yearning. I show and talk about human beings who are searching for a way to fulfill their dreams, which is to say people in search of paradise. Is cinema a gateway to hell or to paradise? It should be both! [Laughs] In the best case, cinema is a ticket to both hell and paradise. I want my audience to recognise certain realities and truths that concern them. I believe there are truths that are uncomfortable, that you don’t want to be exposed to. If a spectator is willing to accept this, then the film becomes not only irritating but also rewarding. In Paradise: Love you tackle the tourist industry as paradise-dealers. There are palm trees and blue sky, but it’s soaked with satire. What is the specific character of ‘paradise’ today? Tourism has become incredibly huge; every Westerner is a tourist at least once a year. What do we believe we’ll find at a resort? It certainly is an attempt to somehow get to a point that could be called a paradise. Does working with both professional and non-professional actors make it easier for you to show this fine line between dream and reality? Working with both, without the audience realising who is who, creates a tension that I would not achieve otherwise. It is not a set-up. It is not something rehearsed, but a situation that develops. And that you expose yourself to… That I expose myself to, but that the actors also have to expose themselves to. In that sense the risk is worth the result? Most certainly. The world I make up is so authentic that as the audience you do not know what is real and what is fiction. That is what I want to accomplish. When do you stop believing in a film that you’re watching? When the film wants to tell me something that I do not believe. The film has to have the quality to pull me into the world that is portrayed. If that is no good, I’m not buying into it. You’ve been accused of being a blasphemer… I’m actually not. The scene mentioned in this context is masturbation with a crucifix. Of course, it has to be taken in the context of the plot and the character. That it’s disturbing for Christians is something different. This is not blasphemy. My intention is not to expose a situation but to show something that I do believe happens in reality. Does the hero of a film need to be a sinner? No, but it has to be a character that is ambivalent. I recognise myself in my characters. I also carry these abysses in me. If none of us did, no one would believe it. One only has to admit it to oneself. Paradies: Liebe opens in Berlin cinemas on January 3. Check our OV search engine for showtimes.