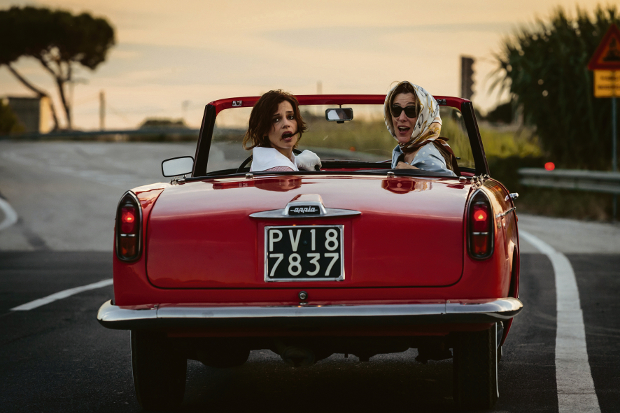 Italian director Paolo Virzì on his exuberant tragicomedy Like Crazy.

The film, which hits German screens December 29, follows two very different, but equally fragile psychiatric patients, played by Valeria Bruni Tedeschi and Micaela Ramazzotti, as they escape from a mental institution and embark on a Thelma and Louise-esque road trip.

Like Crazy seems so tailored to the particular talents of your two leads. Was it planned with them in mind?

The movie was really born in a single moment, when I was shooting my previous film Human Capital. It was my birthday, and Micaela, my wife, came on set as a surprise. In the distance, I saw Valeria leading Micaela by the hand, and they looked like they were doing something secret. It was the first time I’d seen them together and I thought they looked so charming, and also like they were perhaps both a little crazy! At that time the issue of mental health was really at the forefront of my mind, and I’d been working with psychiatry experts on Human Capital. So I started researching the circus of Italy’s mental care system.

There’s a real sense of spontaneity to the dialogue and performances.

We had a very precise script, which we followed strictly for two weeks of rehearsals. But then we forgot about it during shooting. I believe very much in improvisation, but I like to prepare for it and control it – otherwise it’s just chaos. Valeria and Micaela are so different in many regards, but they have a similar animal instinct and intensity in front of the camera. And we involved lots of nonprofessionals in the shoot, including real psychiatric patients. So I had the camera crew on standby to capture anything that might happen. We created a sort of hospital in which we tried to cure ourselves!

Your film walks a delicate line between comedy and tragedy…

This was really the main challenge. Mental health remains a very painful and disturbing issue, because we don’t like to talk about it, we don’t like to admit that we experience it within our own families. I wanted to take this very serious starting point, but create something with elements of comedy, buddy movies, melodrama – all the things that I love about cinema – and use the language of film to help people empathise with someone who’s done terrible things, who society would call a monster. I was partly inspired by One Flew Over the Cuckoo’s Nest. That was touching and funny at the same time, it offered insight in a way that wasn’t just upsetting.

There’s also this strong contrast between the vulnerability of the women and the idyllic, sun-drenched world they inhabit.

We wanted you to feel the heat of the season, to see the wet skin of two heavily medicated people. Usually if you’re shooting in summer, the actors are surrounded by makeup artists, who dry them with towels between takes, but we didn’t want that. We wanted the natural look of two women who are essentially drug addicts, under the light of a Tuscan summer sun…

There are some very specific references to Italian society and politics – did you consider how these might play to international audiences?

I’m curious to see how people respond. In Italy, as soon as Beatrice [Bruni Tedeschi] says “Presidente”, viewers immediately recognise her as a widow of the Berlusconi era. She’s partly based on the wife of one of Berlusconi’s lawyers – she started talking about his private life, and they put her in a mental institute! But Beatrice is also an archetypal character. She’s like Don Quixote, a pathological liar with delusions of grandeur, but she’s maybe more intelligent than any of her therapists. So there’s a balance of cultural specificity and universality.

Like Crazy opens in Berlin cinemas on December 29. Check our OV search engine for show times.