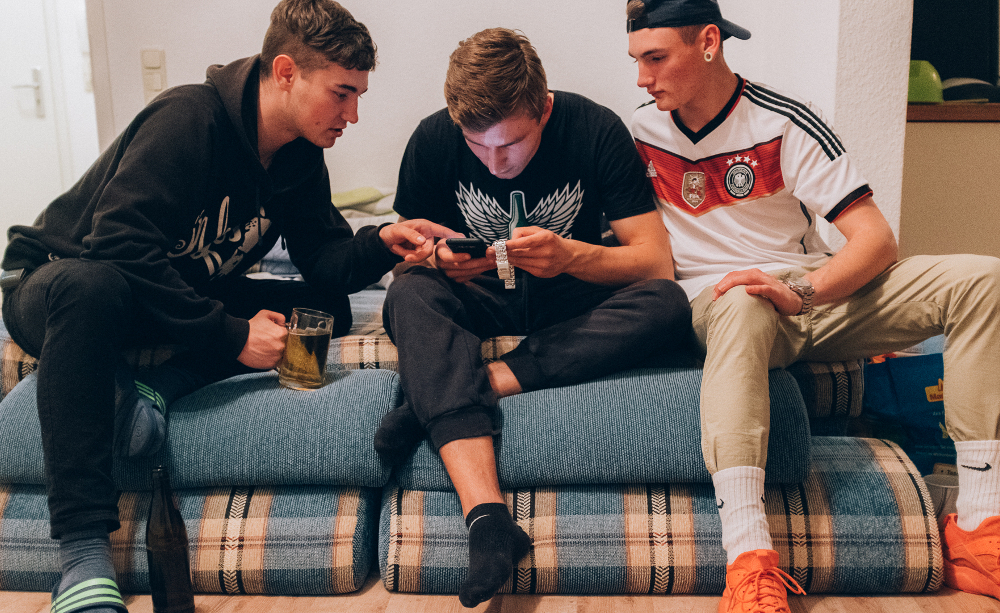 Boys binge drinking cheap wine and walking around the city, each daring the other to drink more “for the fans”: for 20 minutes, the group of early 20-something Germans does little more than curse and chug – and it’s this kind of Youtube content that’s garnered Max “Adlersson” Herzberg hundreds of thousands of followers. In 2017, filmmakers Pablo Ben Yakov and André Krummel spent their summer following Herzberg and his friends around their hometown of Dresden – capturing many an un-PC moment (“Sieg Heil” utterances included) and allowing the scenes to speak for themselves in the finished film. The controversial doc snatched up a Golden Dove at last year’s DOK Leipzig, now you can catch it at EXBlicks this Monday, May 27, 8:30pm at Lichtblick Kino.

What drew you to make a film about these guys?

Pablo Ben Yakov: We happened to stumble over a video of Max walking through his apartment and you can see a lot of contradictory stuff in there: an award from Youtube for his first 100,000 subscribers, right-wing stickers next to Antifa stickers and he himself did not really fit the cliché image of a typical Instagrammer or Youtuber.

Where did the title come from?

PBY: Basically, we were allowed to film everything – except the kids’ parents. The adults were simply missing. You almost wish an adult would come along and say “Enough!” and make them think about what they’re doing. At the same time it was really interesting to see this unfiltered group dynamic within the clique. On one hand it seems like anarchic madness and on the other hand there’s a fairly strict hierarchy, with Max, of course, as the leader. And so it was natural to think that we were dealing with a standalone society of children. Of course, the title’s also a reference to Lord of the Flies.

Let’s talk controversy. I was actually surprised at the accusations of the boys being far-right. Their humanity and tenderness came across to me…

André Krummel: And their creative side! It’s really heartbreaking, there is so much potential. And the question remains: What do we as a society offer these people? Like Max, who worked as a cashier at Edeka and decided at some point: No, that’s not my future, I don’t want to rot here. And you can hardly blame him for that.

How did the protagonists react to the movie?

PBY: On one hand, they laughed at their own jokes and enjoyed seeing themselves on screen. On the other hand, they saw themselves overstepping boundaries and partly winced at watching these things. After the screening with the boys in Leipzig, we were walking together and bumped into two fans, who said that it was an exciting movie but also an incredibly important one to discuss. It was the first time I heard fans of the boys communicate with them in a meaningful way!

How did the boys feel about the controversy?

PBY: Yes, there are extreme right-wing statements, but it actually goes beyond that, you don’t have to be a foreigner to be a target for the gang. The discussion about the film shouldn’t stop at racism. Stepping over boundaries is a professional tool for them, which comes from a media and online culture that was created before the boys were there.

AK: The worst part is that this isn’t understood. We’ve encountered a lot of cinemas that didn’t want to show the movie. They find it dangerous and do not want to get involved.

Something pretty shocking happened at DOK Leipzig. A cinema actually fucked you over…

PBY: Everything that took place in Leipzig stemmed from Twitter where some strong sentiment against the film was stirred up. Everyone was already going into the film wondering if this is some sort of “dangerous movie”. Then festival cinema Cinémathèque uploaded a sort of urgent message on its own website, telling people to come, watch the movie and show us, quote, “what happens when you cuddle with Nazis”. The cinema has also put up a trigger warning before the screening and asked the audience not to pass the microphone to us during a Q&A. And then we just stood there and got yelled at by angry people from the audience. Thank God, the situation eventually calmed down.

AK: In fact, I have never felt so discriminated against before – under the guise of openness and political correctness – and I grew up as a gay man among Nazis. However, in other screenings, we had quite different experiences. People have been very willing to think.

Did you expect this public reaction?

AK: No. Especially not towards us, the filmmakers.

PBY: We were anxious about people feeling misrepresented. We didn’t expect the critique from that direction! Especially the point of everything being ‘uncommented’ was surprising for us, because of course we comment. Not through a voice-over, but with the cut, music and sound design. Also, in feature films, as opposed to documentaries, a person is so much more ready to see the world’s absurdity, but in documentaries there seems to be much less willingness to say: okay, I see things differently, but I can still learn something by watching someone else’s reality, someone who lives and thinks differently from me.