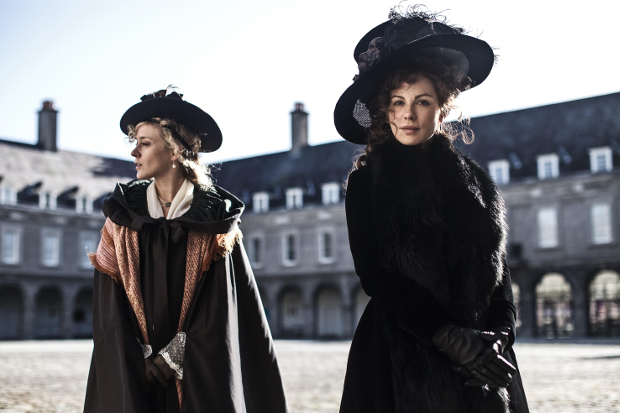 This deliciously droll take on the little-known epistolary novella Lady Susan finally hit German screens on December 29, having been greeted with near universal acclaim since its Sundance world premiere last January.

Did it feel restrictive being beholden to Jane Austen’s words?

Normally when I start a project I have an exciting idea, but then comes the terrifying blank page and, even worse, all the bad stuff you then put on that page! In this case, I had great material to edit. But there has to be a moment where it comes alive as a story, and that was a mountain to climb. When adapting a modern novel, you could quite easily cut and paste the dialogue scenes, but adapting these letters required the creation of extra characters. Mrs. Cross [Chloë Sevigny], the put-upon friend, exists in order to have Lady Susan [Kate Beckinsale] reveal her diabolical plans. But then she becomes her own character, this horrible sycophant. That really helped it start to come to life as a narrative.

How rigidly did you stick to your original script?

I had what I thought was a good script, but once I saw Tom Bennett as Sir James Martin, he gave me all kinds of ideas for comic material. He was like an 18th century English version of Will Ferrell. It’s shocking how much changed once everything was in place. I worry about screenwriters who just write a script and are disconnected from the final project.

What was it about this relatively obscure text that appealed to you?

The book feels very truncated, so we felt we were adding to something rather than subtracting from a masterpiece. It sort of bores me, the idea of taking a masterpiece and making a cartoon of it.

Do you think Austen as source material benefits from a non-British perspective?

I think it’s sexier for non-Brits. These things are sometimes stigmatised in Britain as “heritage” projects, whereas for me there’s no stigma. It helps when you don’t have to read something at school – I didn’t really discover her until my twenties. I’m very grateful that James Ivory doesn’t like Austen– he told me that he just never responded to her, so thank the lord that’s the case, because he could’ve done a beautiful job on all of them.

Your films often feature Americans aspiring towards European sophistication, and here the Brits treat the sole American with condescension.

People really seem to enjoy that on both sides. I noticed it with Barcelona– people didn’t think the film was going to be well-received, but the transatlantic humour and chafing really worked in Britain, Canada and the US, from their different perspectives. It’s great when you have material which is kind of toxic, but somehow each side finds it amusing.

Will the film’s commercial success make it easier to get future projects off the ground?

Boy, I hope so! I tried to make films in London for many years. I had all these projects that were well received, but it was impossible to get them financed. But recently, for the first time in my life, I was offered a script that I like. Generally I get the scripts that have been knocking around for 10 years!

Amazon helped release the film in the US – how do you feel about the blurring of boundaries between theatrical and online distribution?

I’m really glad that Amazon is not following Netflix with these perfunctory cinema releases. [Distributor] Roadside convinced them to give our film a full theatrical release, and they did a great job. It’s also nice that they’re bringing money to the table. I think it’s a boom moment, that’ll lead to a bubble, that’ll lead to a bust. So we better be ready for when it all turns against us, as it always does!