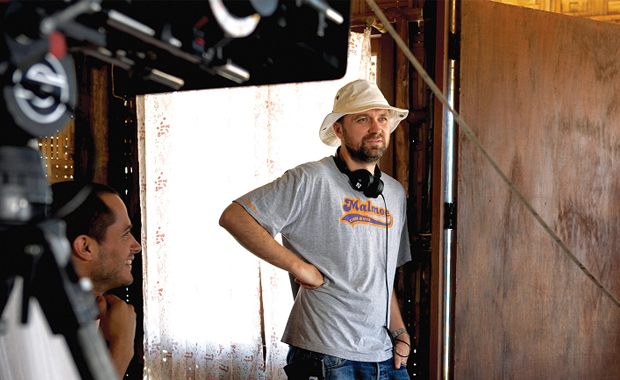 The film premiered at last year’s Berlinale to mixed and sometimes harsh reviews – a new response for Moodysson. Both his 1998 breakthrough Show Me Love, a tender story of teenage lesbian love set amidst provincial drabness, and the hauntingly dark 2002 film Lilja 4-ever (about human trafficking and sex slavery in the former USSR) got him extensive critical acclaim the world over.

With Mammoth, Moodysson has moved away from more experimental works to attempt a vast and ambitious exploration of globalization and family that’s vaguely reminiscent of González Iñárritu’s hit Babel.

Mammoth was the first time you worked with a bigger budget ($10 million) and Hollywood actors (Gael García Bernal and Michelle Williams). Did it feel different?

I don’t feel like I benefited much from the bigger budget. When everything costs more money, as a director you have to worry about financial issues a lot more. In a strange way, it feels a bit like you’re poorer the more money you have. I prefer working with a smaller budget.

You started out as a poet, a profession with a very intimate relationship to language. As a filmmaker, you have made films in Russian and, now, English with extended bits of dialogue in Tagalog, a Filipino language. How does working in a foreign language affect your work?

There are two different people inside of me. One is the writer who is very concerned about language. Then there is the director, and he doesn’t really care about it. As a director, I mostly listen to the sound of things. I trust my actors and grant them a lot of freedom. Generally, I try to forget that I have written the script when I direct. I regard it as a new project – otherwise I would just walk around trying to protect my script.

Your work seems to have turned pessimistic since Lilja 4-ever, a film about a young Russian girl’s descent into prostitution and sex slavery. Where has the hope gone?

I don’t really think in terms of optimism or pessimism. I leave that to the audience to decide. I think there is light and hope in everything I have done so far, even if it is quite small sometimes.

Would it be fair to say that Jackie, the young daughter of the rich New York protagonists in Mammoth, is the closest that film comes to providing a glimmer of hope?

Yes, probably. But to me, there is also hope in the sadness of the movie. Sadness is a kind of pain, which is an important feeling. Physical pain indicates that there is something wrong with your body and it will make you try to figure it out and heal it. Without pain, we are numb. There is always hope in pain. Pain and sadness mean hope.

Mammoth raises obvious moral questions of right and wrong, but fails to propose solutions or offer any clear answers…

Solutions have to lie outside of a movie. Movies raise questions; if I had the answers, I wouldn’t make movies. I have never seen a really good film that provides answers – only bad ones do. It’s the same thing with books. I think one of the reasons you become a writer is this very strong sense of schizophrenia or inner dialogue: a back and forth between various pros and cons. I feel that it is not my job to give answers.

The film is very critical of western backpackers, the romantic notion of ‘escaping it all’. You portray it as basically the same kind of exploitation as first-class business travelling – minus the decadence, but with a worse kind of hypocrisy to it.

I was surprised to see how these Europeans who considered themselves ‘alternative’ behaved in Asia, picking up prostitutes in bars knowing full well how wrong it is. I find it fascinating and strange, but at the same time I sympathize with western frustrations about how far we have moved away from nature and our roots. I understand how liberating it can be to just sit on a deserted beach in nature with a beer. But it is very naive and childish, and is no solution to anything.

What can we do to make things better?

I think the most important thing is to be kind to the people who are close to us. I don’t necessarily just mean family and friends, but also people on the street without a place to live, people who are suffering or who come to our countries as refugees. But it is a very difficult thing to do. Sometimes it seems easier to start a political party or to take part in a demonstration than to give shelter to a homeless person. We all know that we should do these things but we don’t do them, and that can also turn you into a pessimist. But I think the only solution is to start very close to yourself. And hope that you will raise some children who will be smarter than you.

Speaking of pessimism – is it depressing for a filmmaker like you to think that the future of cinema, whether in terms of financial or box office success, may lay with films like Avatar?

The fact that this film has been so successful reminds me what an enormously immature and childish business I work in. Maybe that is a good thing and the way it should be – a lot of directors are teenagers at heart, they’re still capable of dreaming up these silly but fantastic adolescent adventures. It makes me question myself – if I really am the kind of person that should be making movies, because I may not be childish enough.

So are you considering dropping filmmaking?

Actually, I am writing right now, but I’m not sure whether it will turn out to be a film, a play or a novel. The only thing I’m sure of is that I’m not sure. I am not really sure if I want to continue making movies. Working on a film is such a large collaboration with so many people; like a big circus and as a director, you are the clown in the middle of the whole thing. But sometimes you just want to be alone sitting in your room, and right now that is how I feel.