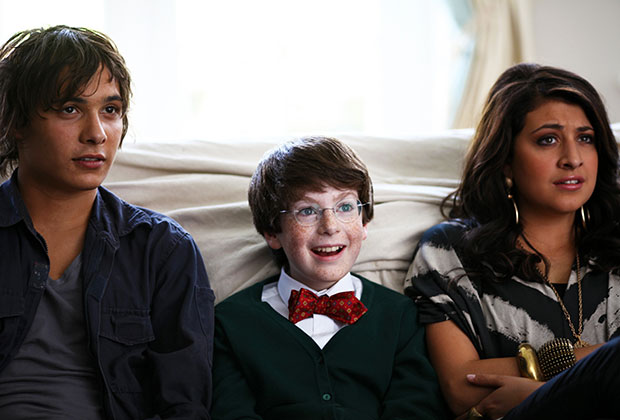 As the feel-good Papadopoulos & Sons comes to German cinemas, first time writer-and-director and self-distributor Markus Marcou talks about spontaneity and technology, the brave new world of social media – and about art following life into the European Parliament.

You trained as an actor (at LAMDA) then went into playwriting. How did this prepare you for directing?

I’ve been an actor. I know actors. I love the company of actors. I have a theory on how to get the best out of actors. I joined an improv theatre company in London called Flux: long-form improvisation where you just get up on stage with few prepared models and improvise for 45 minutes. That helps you as a writer more than anything else because you’re starting to unlock bits of the brain. When you’re improvising, you’re making creative choices without the time to think and often, that leads to a much more interesting choice. When you’re writing, you’re trying to think too much in the lines. So you want to get back to that sense of uniqueness. So yeah, it all helps. Massively.

You marketed your film from scratch, via social media. You’re a blogger yourself. Yet your film is about core values: family, hard work, low-key ecology – almost anti-technology?

Yes. At some level you could say technology destroys real human relationships but I think it can create community and relationships. I think technology has brought people together. That’s how I see social media, Youtube: as a way of connecting ideas that may not have made the mainstream. It’s an alternative view.

But in Papadopoulos & Sons, the main guy has come a cropper because of his faith in the new world. He’s forced to regress.

Well, it depends how you define ‘new world’. You can’t divorce yourself now from social media and technology. Everyone’s connected now. The new world is community – it has to be. We are at this precarious point now in terms of systems collapsing. Religious institutions are now at their most vulnerable. The global banking system is collapsing, albeit bit-by-bit. Political organizations now are facing a big challenge: it’s as if the middleman has been taken out of the picture. Because of social media, you can be more direct. You don’t necessarily need a political party now to connect your ideas to a voting populace. The new world is disintermediation. But the values don’t change. The core values of family and community are more important now than they’ve ever been. They’re not mutually exclusive.

Immigration, integration, identity: Papadopoulos & Sons shows them as big issues with small answers. Is this how you experienced them?

Answers are not small. They’re simple. I think the solutions are much simpler than we make out. I’m an educated man with an MA in legal and political theory, got my degree, got a diploma in law. But I can’t tell you how government works. I don’t understand different layers of government. I don’t understand the financial instruments that are being used to build our world. I’m struggling to understand what I sometimes read in the papers: things like quantitative easing. This is a complicated world. Do we need complicated solutions? Maybe it’s just being simple and small that’s the answer. It’s easily dismissed as naïve and simplistic—but that’s also too easy to do.

How did Papadopoulos & Sons end up being screened at the European Parliament?

Georges Corraface who plays Uncle Spiros had a friend at the European Parliament who did cultural events and Georges casually mentioned that he’d done a film on the banking crisis in which Harry, played by Stephen Dillane, has to make these choices: debt or starting again. And the guy said: “Oh? That sounds topical.” Then the Greek distributor got wind of this and a friend of his, a Greek MEP, said: “Well, this is brilliant. This is kind of what Greece is facing. Do we have more debt, do we take out further loans or do we just go kaput, back to economic year zero?” Which no one is prepared to do. The next thing I know, it’s being screened in the actual parliament and on the same day, the Greek Prime Minister was on the floor below, negotiating the next Greek bailout. Weird. And the Greek journalists that were there thought it was crazy. And then just before the UK release, we had the Cypriot crisis. The film seems to follow crisis, in its own strange way.

Papadopoulous & Sons is now showing in Berlin cinemas. Check out our OV search engine for cinemas and showtimes.