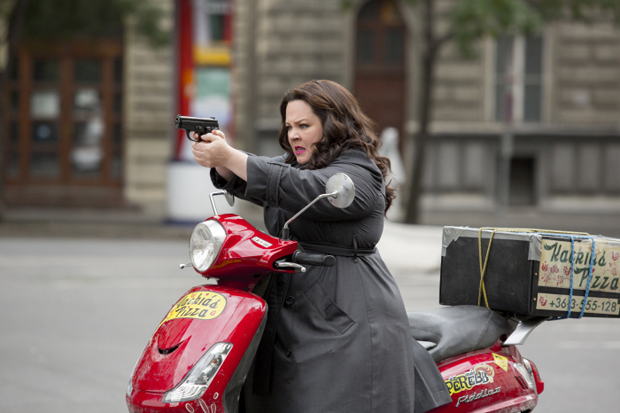 A female spy who’s clearly out of her element in skimpy dresses and high heels is a rare thing. But a female spy in general is a rare thing. Leave it to comedic duo of Paul Feig and Melissa McCarthy, who has already given us such gems as Bridesmaids and The Heat, to turn that around. In Spy, McCarthy plays an overlooked CIA agent who spends years behind a desk advising cool, suave Bond-types like Jude Law on their every move through an earpiece. Until one day, she finally gets to prove her worth out on the field.

It’s both an action movie and a comedy. How did the director juggle the different tones?

Paul [Feig] is a freak for action. He once wanted to be a stuntman. He can still do front-flips and is always doing these crazy stuff with the stunt guys – in his suit! But it’s part of what’s great about Paul – he has no “should-button”. He works on pure instincts, and luckily I think his instincts, aesthetics and humour are really good.

How does it feel to be the star in a spy movie where, people like Jason Statham and Jude Law play, as Jason himself put it, the “dumb fuck”?

It’s pretty great! We had a blast making it. That was a fun group of people. And I mean, sometimes people are like “How strange to have a female spy!” And I was like “You know there are female spies!” All through the film, I actually talked to a woman who did that job, which I thought was really interesting. Even the crazier outfits that I picked out, like the grey, short wig and the cat, she’s like: “That’s pretty accurate.” The thing is, when you pick out disguises, they shouldn’t be glamorous. You just want to blend in, become nothing.

Do you think we’ve arrived in the era of female comedians?

I hope so. I’m just fighting for good characters. At the moment, I’m lucky that I get to fight to make these women real, smart – and flawed. I always want a flawed character. I don’t think I’d know how to play someone who has no flaws, I wouldn’t know how to make them interesting, or real. If you don’t make female characters interesting, then they’re not interesting to watch. And then people say “Women aren’t that funny in films.” Well, not when you write these lame, perfect characters!

You get more and more foul-mouthed in the movie, to the point of bringing a grown man to tears. Why is it so funny to see you being verbally abusive?

I don’t know. I’m not that way in real life, for the record. Paul loves to make me swear. For me, I loved the inner turmoil of the character Susan, who doesn’t speak like that but has to fake it and be believable. I love that kind of push-and-pull. And Paul always just stands by the side and goes “Swear more!” when I’m like “There’s no swear word on Earth that I haven’t said.” And I don’t know why that’s so satisfying, but I get all of that out at work, which is really cathartic, and I don’t do it in life, luckily.

You shared many scenes with Miranda Hart, who’s a celebrated British comedic actress. Did you notice any difference in your approach to comedy?

She’s also a celebrated dramatic actress, she’s just great across the board. If she ever had a funny line, I was like “For the love of God, tell me. I would like to steal all of your good ideas.” She’s really good with getting so much out of not overplaying it. By just staying in that flustered character, she gets so much out of it.

Besides Susan Cooper? I’m a Bond fan but I really love all of them, like the Jason Bourne movies. I get totally wrapped up in that kind of stuff, the action and suspense of it. But the Bond films are fun because they’re so campy in a way. I remember when I was a kid, I was always like “He doesn’t even fight that much!” He’s always in a tux and getting a drink. I love them for their style.

Spy is out in Berlin cinemas on June 4. Check our OV search engine for show times.