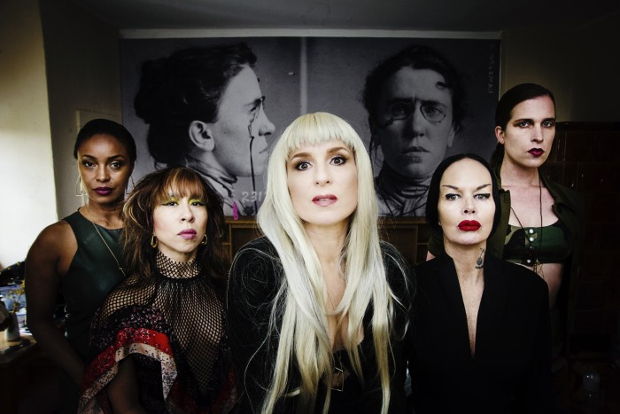 Radical queer director Bruce LaBruce doesn’t just push the envelope – he stuffs the mailbox to the brim, douses it in gasoline and sets it ablaze.

Based in Toronto, he returned to Berlin, his favoured filming location and frequent stomping grounds, for latest film The Misandrists, a typically provocative meditation on gender, violence, sex, and patriarchy set at the turn of the last century. We talked to LaBruce about castration, leftist “neo-Stalinism” and the flak he has received for making a critical feminist film as a gay male filmmaker. You can catch The Misandrists at our annual EXBlicks PORNBlicks presentation followed by a Q&A with star Susanne Sachße at Lichtlick Kino on Tuesday, December 26 at 8:30pm.

Why is The Misandrists set in 1999? It has a very dystopian aesthetic quality.

It’s funny because The Handmaid’s Tale TV series just came out this year as well, and I’m Canadian, like Margaret Atwood, so I think there’s a certain Canadian apocalyptic quality to both of them. Canadians have this reputation for being breezy and benign, but actually we can be very dour and pessimistic, like in a lot of northern countries. The Misandrists is kind of like the flip side of The Handmaid’s Tale because even though it has that dystopian feel to it, it’s actually a utopia for lesbians; it’s a world without men. It’s women trying to rid the world of men altogether, even in terms of biology. But it does have this quality of dystopia, because obviously the patriarchy has gotten so unbearable that these women have been driven to this extreme.

Watching your film, one might think women shouldn’t run the world…

The film supports feminist ideals and certainly female equality, but it’s also a critique of certain kinds of radical feminism. And that’s another reason I set it in 1999, because I wanted to direct it more towards this kind of second-wave feminism, which predates the current situation, which is a much more splintered feminism with these different factions. The second wave was more united. It’s a critique of the way any extreme left wing group, or for that matter extreme right wing group, can have those dynamics of power. An all-women group is not immune to the dynamics of power, such as hierarchies. Big Mother, [the head of the group in the movie] is a problematic leader in that way, because she doesn’t practice what she preaches, she is very authoritarian, she acts as a sort of dictator.

It’s this idea of the oppressed becoming the oppressor, where she’s willing to use tactics that are so extreme that it takes a lot of intellectual obfuscation to rationalise and justify the strategies she uses. For example, counter-violence, which is a term that Ulrike Meinhof coined, It means that, in principle, we’re against violence, but when violence is directed towards us we have no choice but to respond with counter-violence. So there are lots of contradictions there, but it’s also a kind of fantasy film.

Speaking of the different factions on the left, do you think infighting is inevitable?

In terms of the infighting in the left these days, it’s gotten to an extreme that I call “neo-Stalinism.”. The rise of neo-Fascism on the right is extremely disturbing, obviously, but this tendency on the left towards being very censorious is also distressing. And this idea of reporting on other people, so if someone posts something on social media that’s deemed inappropriate or incorrect, you’re supposed to report it. There’s a bit of a mob mentality to condemn something without any sort of vetting of the issue or giving the person a chance to explain themselves. There’s a mentality of victimisation. It’s not something that I think is progressive, and in many ways it leads to this idea of policing language and desire. It goes back to this flip side relationship to The Handmaid’s Tale, where you have this super-controlled society where everything is monitored, and even your thoughts and fantasies are suspect, which then leads to a paranoia – people watching what they’re saying, or thinking that something they say might be used against them.

Is basing a radical movement on gender inherently flawed if gender itself is a construct?

The forced gender reassignment in the movie is very contentious, obviously, as was using the stock footage of the sexual reassignment surgery, which was taken from an actual hospital in Belgrade. But you know, you have to see the film in a tradition of camp, where something is taken to a really exaggerated extreme of artifice for effect. Something over-the-top, something theatrical. Grand Guignol, that violent imagery. Artistically, that’s where it’s coming from. I think because of that camp aspect, it’s more about this identification with ideas of feminism and female empowerment. It’s going against a hundred years of cinematic imagery that’s directly against women. Think about all the TV shows predicated on the body of a dead woman. So the film reverses that trope, and in that way it has a certain satisfaction to it. It’s like a revenge movie, but with political underpinnings. So it’s meant to be contentious, but also humorous. That whole scene is done as if it’s Dr. Frankenstein’s lab or something.

Well, there are a lot of revenge horror films starring women that end with castration as a reward, from I Spit on Your Grave to Hostel: Part II. But here, it’s subverted because they get a new comrade.

Exactly. It’s almost an inversion of the Final Girl, because all the girls are Final Girls, and even the man becomes the Final Girl. But the other thing is that sometimes, gender activists want to believe that this is an unproblematic procedure that you can just opt to do. But it is a profound transition, and physically kind of traumatic. So I don’t think it’s something that can be glossed over. Showing the operation footage is recognising that there is a certain extremity to this struggle against your own body. Kita Updike, who plays Isolde, is trans herself and was preparing for gender reassignment surgery while we were shooting, so of course we had a lot of discussions about how we should represent the character. It’s certainly not something the film takes lightly.

Have you had any feedback from the trans community or other queer activists?

I haven’t really had any direct anger. I’ve mostly run into an appreciation of the fact that it takes that issue seriously, and the fact that the women in the film come around to this acceptance of Isolde. Trans people seem to find it very moving. I get more resistance from feminists, I would say, and lesbian feminists in particular, in terms of the forced transition scene or about using the historical feminist imagery during the film’s credits. People have questioned whether it was justified, the main question being, am I actually pro-feminist or not. How can I present what some people say is a cliché of lesbians, this litany of clichés about feminism, and still consider that I’ve made a feminist film? Which I do. It’s essential for the left to be auto-critical and look at its own strategies and sort through them, and not pretend that they aren’t there.

The cast is very diverse… I can’t remember another recent film that had three black female characters from different countries.

It was very purposeful – in order to make a broad statement about feminism, it had to be inclusive. The whole process was really interesting because the women bonded strongly during the film. Victoire Laly, who plays Ute, was saying she’s always cast in Germany in very clichéd black roles, and this was the first time she’d been cast in a role that gave her this autonomy where she could express herself.

Do you think that there is an irony in a man having made this film?

For one thing, you have to look at my career in its totality. I started out in the queer punk movement in the 1980s and we were always very much about an alliance between lesbians and gay men. We really fought against this idea of segregation and compartmentalisation of lesbians and gays, and even misogyny in the gay world. I hate bringing up the notion of “credentials” but you have to look at the work of the filmmaker themselves. I personally think that filmmakers should have the freedom to make movies about whatever they want. They can be rejected by people, but this idea of cultural appropriation can be problematic, because if it gets reduced to where you can only make films that are directly related to your own experience, then I don’t think it’s good for cultural dialogue or artistic practice.

When it comes to your own queer leftist community, have you ever felt the urge to self-censor?

Well, one thing I would say is that the film was rejected by some of the major gay mainstream festivals, especially in North America and Canada. They don’t really have to explain why they didn’t show it, but I mean, I have a history of showing films at those festivals. To me, that seems a little questionable, because the film is so topical, and it’s made by an established filmmaker. In fact, one of them actually said that they couldn’t show a lesbian film made by a gay man.

But in terms of talking about the film, it is a bit of a landmine these days with some of these issues. I do find myself choosing my words more carefully. With the transgender issues in the film, it is a quickly evolving consciousness, and the language constantly changes. You obviously have to try and keep up and stay aware of those issues but I don’t want to get to a point where I feel like I am censoring myself or downplaying certain issues in my films, or trying to ameliorate the effect of the film or how it’s perceived.

In the real world, how do you feel like the systems the characters are challenging will ultimately end? Is the answer intersectional or separatist?

Well, for me, as a kind of Marxist sympathiser, I worry sometimes that people are fighting the symptoms of what’s going on, and not the cause. I worry about the black and gay movements, which were very counter-cultural in the beginning – they were against the very economic structures of society. You can’t just base your movement on the fights for gender or equality unless it’s meaningfully challenging the socio-political roots of the problem. That is one of my concerns, that it could just be one corrupt system replacing another.

But I’ve also considered myself an outsider on so many levels that as an artist I try to just look at the zeitgeist and interpret it in almost an unconscious way, and just express what I’m feeling intuitively. I’ve always been an outsider in the gay world, I’ve never been totally comfortable with the idea of the gay patriarchy, so I’ve intentionally fought against those kind of tendencies. I always take Jean Genet as the model: his strategy was, whenever he would see a revolutionary moment happening in the world he would support it and fight for it, but at the first sign of it becoming co-opted or diluted or institutionalised, he would not only abandon it, but turn against it. So it’s this idea of being a free-floating radical, and challenging all sorts of orthodoxies. That’s my strategy. You can’t develop this groupthink where people’s voices are discouraged.