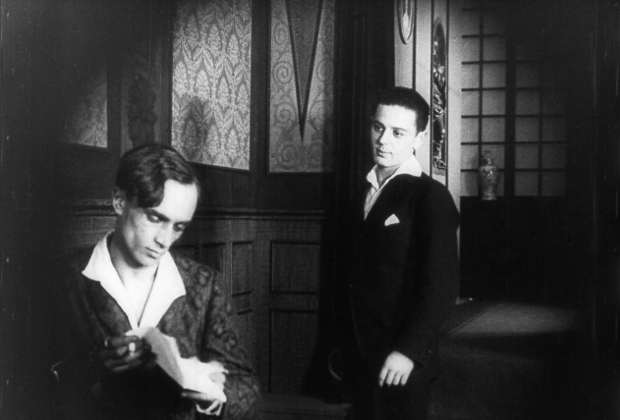 This year sees the Teddy age gracefully to 30, but queer film itself is much, much older. As part of a retrospective hosted by the Teddy, the Berlinale sees a screening of a restored version of 1919’s Anders als die Andern, which starred German film heavyweights Conrad Veidt, Anita Berber and Reinhold Schünzel. It portrayed the doomed life of a professional violinist who gets romantically involved with his student and eventually kills himself due to social ostracisation. Not only is it the world’s first known gay movie, it makes a passionate plea for the acceptance and decriminalisation of homosexuality, a full 75 years before the repeal of Germany’s anti-LGBT law Paragraph 175.

Since 2004, director of the UCLA Film and Television Archive Jan-Christopher Horak has been collaborating with Los Angeles queer film festival Outfest for the Outfest Legacy Collection, an archive and restoration project that boasts some 35,000 LGBT films. Their restored version of director Richard Oswald’s silent ode to gay acceptance finally gets screened at the Berlinale on Valentine’s Day (and once more on Feb 21) at Zeughauskino, with English translations of the intertitles.

You can catch Horak himself at a panel discussion on the preservation of LGBT films, happening at Station Berlin on February 17 at 10am as part of the Berlinale’s Queer Academy programme.

Richard Oswald was a very well-known and very prolific producer and director. I mean, he wasn’t quite in the same category as Fritz Lang or F.W. Murnau – he made films on the cheap. After the end of November 1918 revolution in Germany, there was a period – 1919 to mid-1920 – when there was no censorship. A lot of films were made that really pushed the limits, especially in terms of sexual content, but actually all other kinds of content too. Anders als die Andern is one of these films that managed to be made in that time period. The film was co-written by Dr. Magnus Hirschfeld, who as you probably know was one of the first really important leaders of the gay liberation movement in Germany.

How come a re-release of the film is only happening now, almost 100 years later?

The problem with the film is that only a single copy survived. And this isn’t even a copy of the actual film, but material from the film. What happened was that the Social Democrats, who had taken power after the revolution, re-instituted censorship in the 1920s, because [they thought] Germany was getting out of hand. And sooner or later – especially after Hitler came to power – all the copies and all the negatives were destroyed. But in 1926, Magnus Hirschfeld had made another film, in which he had cut in large pieces of this film. Die Macht der Liebe had about 40 minutes of Anders als die Andern in it. The only copy of that film that survived was in the Ukraine. So we bought a copy of the surviving material and then went through the censorship records and found a very long synopsis that Hirschfeld had written about the film.

We did a preliminary version that we premiered at Outfest about two years ago, but this is the real premiere of the final restoration.

Was it just the lack of censorship at the time that allowed this film to be made, or were there more permissive social attitudes as well?

Post-WWI Berlin was a very open society. Maybe not in terms of going on the news with homosexuality or anything like that – but certainly there were a lot of gay bars in Berlin at the time. We actually have a scene in the film from one. So the atmosphere in Berlin was quite open – and because of Magnus Hirschfeld and others, there was probably the first and the largest gay liberation movement in the world going on in Germany. It was very, very active.

And Reinhold Schünzel as well. He was the blackmailer. Schünzel himself was a director and directed and acted in quite a number of films in the 1920s. Anita Berber, of course, was hugely famous – less for her film career and more for her other activities. She died of a [rumoured] drug overdose.

Then Conrad Veidt in the same year was making the Cabinet of Dr Caligari, which turned him into an international star from that point onwards. And Veidt was gay. From everything I’ve heard, he was actually gay. Schünzel I’m not sure about.

Was it a high-profile release at the time because of their presence?

In this period, there was a really intense competition of screens. Richard Oswald actually owned his own cinema, and his wife was selling tickets. So he showed his films mostly in his own cinema, unless they were really huge and he could get someone else to do distribution.

As far as I know, Anders als die Andern wasn’t hugely successful. And I am pretty sure that it didn’t play outside of the major cities. This isn’t a film that would have played in the suburbs, or in the country.

How could you gauge its success, 97 years on?

One way we can tell that is wasn’t hugely successful – and this is speculation but it usually holds true – is that there were no major foreign sales. Usually if a film does really well, it gets sold abroad and there are copies. Like, we’ve had about 10 restorations of Metropolis, and the reason we can always do another restoration is that another print turns up some place in the world, like Argentina or Uruguay. And this film, the only known copy was in [Ukraine] – and it wasn’t even the original copy.

Unfortunately, because of 1933, all the records that Oswald may have had disappeared, because he was forced like many others into exile and ended up in Hollywood, not doing much. For that reason, it was very hard to do the historical research because there’s just not much documentation on the film, other than censorship records and the trade periodicals/film magazines.

Was there any backlash against the actors after the Nazis took power?

Well, Berber was dead [by 1929]. Schünzel and Veidt were forced into exile, Veidt probably because of his sexual orientation, because the Nazis would have known about that. And because of the kinds of films he made. And Schünzel, who was only a quarter Jewish or something like that, actually managed to stick around in Berlin and made a couple of films until 1936-7. Then he made a film called Amphitryon, which was basically a satire of Hitler, and he had to leave the country pretty quickly after that.

So the film was more of a social achievement than an artistic one?

Yes, absolutely. Nobody would say this is a great artistic achievement as a film. I wouldn’t consider it in the same class as Caligari… or even a film like Metropolis.

Why should we watch it today?

It’s important for people to understand that the LBGT movement is not something that came out of nothing in the 1960s and 1970s, but in fact has been around for a very long time. And the fact that someone like Magnus Hirschfeld had already been advocating for gay rights in the 1920s is very important. It’s also important for young gay people to understand… because now we’re living in a time where at least in German and American society, there is almost 100 percent acceptance of gayness other than among religious fanatics. So once you’re in that mindset, we might tend to forget how difficult it could have been for previous generations. And I think that’s important for them to understand too.