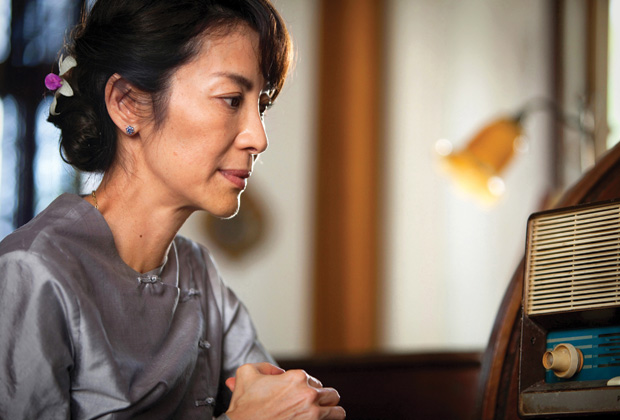 At this year’s Cinema for Peace Gala, the International Human Rights Film Award went to Luc Besson’s The Lady and to the actress who starred as the non-violent pro-democracy Burmese dissident Aung San Suu Kyi: quite a jump from her more mainstream action movie work balanced atop bamboo shoots in Crouching Tiger, Hidden Dragon or high-kicking out of trouble in Reign of Assassins.

When was the first time you met Aung San Suu Kyi, aka Daw Suu?

The first time I met with Daw Suu, she was just released from house arrest for a few weeks, and we were still filming in Bangkok. For me it was a great opportunity to see for myself how real, how inspiring this woman would be.

How did she react when she heard you were making a movie about her?

Before we made the film, Luc took great pains to get a message to Daw Suu to let her know. But we were also confident that she would not turn around and say no, because Daw Suu has always impressed upon artists that they have the right to express emotions. The way she says at the end of the movie, “Use your freedom to promote ours,” this is something that she has actually said.

We also knew that she would not be entirely like: “Yeah, somebody’s doing a movie about me!” because she’s always been very protective and shy about her own life. Personally, I didn’t do this movie for her viewing. It’s for the rest of the world to understand the plight of the people of Burma.

Where do you think her strength and courage comes from?

That was one of the biggest things, to find out where that resistance, that courage comes from. There has to be something that grounds you in such a way, and I really believe that it comes from love. First of all, from the love of her husband – that commitment. Of course, it was very hard when her husband died. It’s a very interesting perspective. As an actor, you try to find things or experiences in your own self that you can relate to. I couldn’t.

Did the fact that you are both Buddhists influence the way you approached the role?

The truth is that we can be born Buddhists, but we have to practice to be good Buddhists. Although we don’t relish suffering, we understand the goodness that comes beyond true suffering. So it did help me tremendously. As a Buddhist, your family is not blood-related. The whole world is your family, and it is that enlightenment that you practice upon. You really feel that all the people around her are family: it’s that connection that you have with the world.

Is it the most important role for you personally?

I think so, on many different levels. I’ve been very, very blessed to have worked with some of the most talented directors and artists in the world. But this has become more than just a film. You’re very lucky when you do a movie that can entertain and makes sense. But you’re doubly blessed when it has a very important message.

It’s a highly emotional story. What would you say is the most challenging scene you had to act, the most difficult?

The Shwedagon speech was very powerful, and very necessary, because that was the turning point for her people and herself – and her stance on non-violence, in the scene when she w alks towards the guns. And of course, the whole end sequence, which was brutally raw emotion.

Will The Lady show in Burma?

That is our biggest wish. I’m sure you’ve heard reports where Luc Besson says that this is the one time he endorses piracy, because at the present moment we haven’t found a way to get it in. We hope that they will change their minds.

The Lady (The Lady – Ein geteiltes Herz) opens in Berlin on April 5.