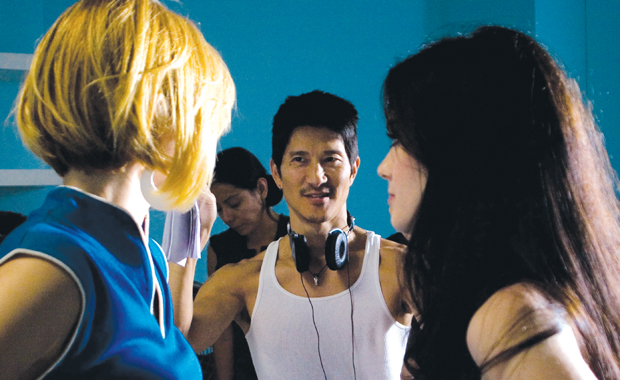 Following his widely acclaimed Mysterious Skin (2005), Gregg Araki returns to the more underground mood of his ‘Teenage Apocalypse Trilogy’. Kaboom shows the same penchant for teen angst, promiscuous sex, farcical violence and far-out sci-fi that made him one of the most memorable directors of New Queer Cinema.

Kaboom feels like a return to the ‘Teenage Apocalypse Trilogy’ and the kind of filmmaking you did earlier in your career. Was this your intention?

I wanted to make a kind of cult movie, like those movies, but for the next generation. Those kinds of cult movies that speak very specifically to this demographic are really not made very often anymore.

It’s a bit more upbeat than the films in the past.

There’s a sort of pop accessibility to the film that is much more like Smiley Face (2007) than it is like The Doom Generation (1995). The movie’s a lot less angry than my earlier movies. And I think that’s because I’m not as angry anymore.

But the film is still apocalyptic.

That’s the dichotomy of the movie, because I’ve always seen it as this dark, apocalyptic kind of epic. I remember when The Doom Generation premiered, after the movie was over, the audience just looked like shell-shocked. Whereas with Kaboom, the last shot of the movie happened, the audience at Cannes started to cheer, and there was this crazy standing ovation. Though it has apocalyptic themes, it’s a fun movie, and it’s sort of intended for an audience to be able to watch it again and again.

Juno Temple does an incredible job with the character of London. All of your films have amazing, powerful female figures…

Her character sort of represents the political point of view, in terms of New Feminism. I never saw her character as being a slut or a nympho; I just saw her as a kind of free spirit that was really independent and had a very straightforward attitude about sex and sexuality and relationships, and she was just exploring and experiencing things. In the US, it’s very hypocritical, puritanical when it comes to sex and sexuality, and the way people treat sex here is sort of a forbidden, taboo thing.

Where does the spirit of this female character come from?

I think that in general, my movies have a little bit of the genres I was really into when I was in film school. Things like the 1930s screwball comedy and couple-on-therun movies, and those genres tend to have very strong female characters and male characters that are more passive. One of my favorite movies of all time is The Lady Eve. I love that movie so much because basically the sex roles are so reversed.

I can’t even remember the last time I saw a decent sex scene in an American movie. My interest in sex and sexuality in cinema is not really voyeuristic; it’s really that I just find this kind of interaction between characters in those moments of intimacy fascinating. That’s when people’s real secrets and real selves are revealed. Cinema allows you access to these characters’ private, intimate moments, and that’s when you really find out what people are like. The example I use is the cunnilingus lesson in Kaboom: you could be that character Rex’s best friend for life and never know him in the way you get to know him in that scene.

How autobiographical is this film?