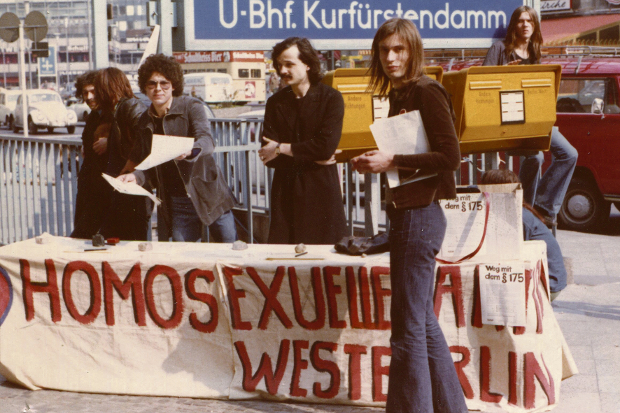 Out in East Berlin filmmaker Jochen Hick looks at gay life on the other side of the Wall in My Wonderful West Berlin.

For his latest deep-dive into German queer history, Hick has assembled a celebratory kaleidoscopic portrait of gay life and activism in West Berlin between the end of World War II and the fall of the Wall. Berlin presents multiple opportunities to catch it with English subs, from Lichtblick Kino throughout July, to sporadic screenings at various Freiluftkinos.

Did you feel this was a chapter of history in danger of being forgotten?

I think it’s very important that the past is preserved. If you don’t document something, it can be erased from history. Down the line people can claim that there wasn’t discrimination, without hard evidence to the contrary. I also think it’s important for gay people to understand that they didn’t achieve liberation all by themselves. The women’s movement set a precedent, and other things were happening in parallel, without which the gay movement would never have succeeded.

Did you set out with the intention of making an uplifting film?

I think the film is optimistic largely because the protagonists’ experience of West Berlin was positive. It was a city where they experienced liberation, whether that was because they didn’t have to join the army, or because they were students, or because West Germany didn’t give a fuck about what happened in West Berlin! It was easy to get by because there was social support and rents were low, so people had time and space to develop personally.

Some of your contributors claim that the glory days of Berlin are over, but this idea of the city as a hedonistic utopia still prevails.

When gay men in particular talk about which period of their life was the greatest, it’s inevitably when they were young and sexually active! So when they look back, of course it all seems much more exciting thanBerlin life as they know it today. I think the notion of Berlin as a place where anything goes is still true to an extent, but it’s certainly very different now. It’s harder to survive with little money, so there’s much more commercial pressure. But on the other hand you have really exciting developments in the queer and trans scenes. Older LGBTI people sometimes claim that the community was much more political back then, but that’s just not true.

One of your subjects claims that “the emancipation of gays happened through capitalism” – do you agree?

No, I’m not convinced, but he makes an interesting point! For me it was interesting to catch up with these super-leftist members of HAW (Homosexuelle Aktion Westberlin) and see how their lives have changed over time. It might be considered a contradiction that some of them have ended up as “traditional” couples in these huge apartments in Charlottenburg, although this is simply because they moved here 40 years ago. But then there’s the fact that some of them accepted the Cross of Merit from the government, which they used to oppose – this you can certainly question.

Do you feel that the queer scene has moved in the right direction between then and now?

Romy Haag says that back in the 1970s, there were never problems between the different strands of the queer community. West Berlin was this small island, and everyone had to get along. You could say the community feels more segregated, and in some ways more intolerant today. But I remember a pride parade in the early 1990s where I was asked by women to stand at least seven metres away from the feminists! This would rarely happen today. In some ways I think things were more realistic back then, because lesbians and gays understood that at times it was more beneficial to look after themselves before coming together as part of this broader group. Today, I think everyone is thrown together and expected to conform to the same ‘queer’ label, without proper consideration of the dynamics.