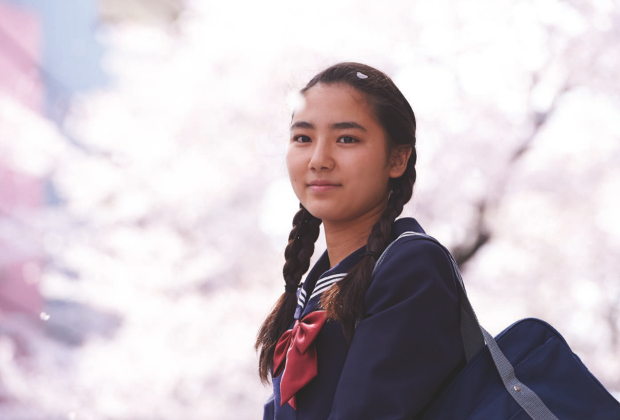 With a Golden Camera for the best first feature and a Grand Jury Prize from Cannes under her belt, Japanese director Naomi Kawase is one of the world’s most esteemed filmmakers. In the sweet-natured drama An (Kirschblüten und rote Bohnen), she shines a light on the lesser known plight of leprosy patients in Japan using the story of a disillusioned pastry chef and the unexpected help he receives from a seventy-something lady to perfect the bell-shaped dessert dorayaki.

There are many Japanese delicacies, why dorayaki?

The movie was adapted from a novel which based its story on the making of dorayaki’s, I just went along with it. Of course we all know that sweets are supposed to make people happy, so I guess while it could have been another delicacy, it had to be something sweet at least.

Compared with your previous films, An seems like a more accessible, straightforward effort. Was that a conscious decision on your part?

That’s a fair assessment. It’s mostly to do with the fact that, again, the film is based on pre-existing materials. In the original novel there are these three characters and a clear storyline that we expanded on for the movie. So there’s an inherently identifiable structure, which helps tell a simple, lovely story.

What drew you to adapting this particular book?

What drew me to this project is first and foremost the fact that it deals with things we don’t see or hear. Its lead character communicates with nature and listens to the cooking beans, for example. There’s an invisible, inaudible element to it that can be beautifully described with words but is hard to realise cinematically, which I found to be a worthwhile challenge.

Can you talk about working with lead actress Kiki Kirin, one of Japan’s most experienced actors?

What’s most impressive about Ms. Kiki is her ability to intuit and empathise. I didn’t have to give her instructions like “Be there, say that.” She came on set and could already feel what the movie’s about. The demeanor, or indeed the whole presence of her character is more the product of her empathy than just her imagination. That’s what an experienced actor brings to a film, which was something new to me.

One senses an affinity to nature or spirituality in most of your films, including this one. Where did it come from?

I have great respect for the natural world. I grew up outside of big cities and still live in a small village, so I’ve always had the chance to experience nature directly. I think all the natural elements that don’t speak or think like humans bless us through their very being. I don’t see myself as someone who lives in the nature but someone who’s only living because of the nature. It’s like a gift that we receive as humans. I assume this is why nature is well represented in my films.

Have you been influenced by any particular filmmakers?

To be honest, I don’t watch a lot of movies. When I was young, up until high school, I trained intensively for basketball and was even considering going pro. As a result, I’ve never been an avid movie-watcher and don’t think I’ve been influenced by other filmmakers, stylistically or otherwise. If anything had a definitive influence on how I approach filmmaking, it’s probably my upbringing. I didn’t grow up with my parents and was raised by my elderly adoptive parents, who belonged to the generation that had lived through the war and was quite religious, or spiritual in their worldview. We used to say prayers before each meal and prayed to everything from the sun to the food on the table. I think this experience, above all, inspired me to see the spirituality in nature, to feel such a strong personal connection to nature.

Would a film like An be considered a commercial or an arthouse film in Japan?

It’s definitely an independent film but it was shown in 150 cinemas nationwide. In Japan, 300 copies would mean a commercial film with a major release. Ours was smaller but it had a pretty long theatrical run and was embraced by a lot of people. At one point the film was supposed to be taken out of theatrical release, but at the request of the public, it got re-released.

Was it difficult to finance a film like this in Japan? Was public funding needed?

This particular film was mostly financed by three main sponsoring partners – the publishing house of the original novel, a regional TV station and a cineplex company. We had some public grant money too but in our case it was easier to get it because they knew that France and Germany were already supporting the project.

A couple of years ago, you were a member of the Cannes competition jury chaired by Steven Spielberg. What was the experience like and was the Palme d’Or winer Blue Is the Warmest Colour also your personal favourite?

It was in fact a unanimous decision, everyone on the jury found it the deserving winner, myself included. Mr. Spielberg did a really good job leading the jury and kept the debating process fair.

Is it difficult to have a career as a female filmmaker in Japan?

It is difficult. It’s difficult for women to have a professional life in general. Japan is very conservative in this regard. People would ask women who also work if they’re neglecting their family for the sake of a career. In Tokyo things are slowly turning around, with some companies now supporting men who are ready to stay at home and take care of the children. But by and large it’s still considered the woman’s job.

An opens in Berlin cinemas on December 31. Check our OV search engine for showtimes.