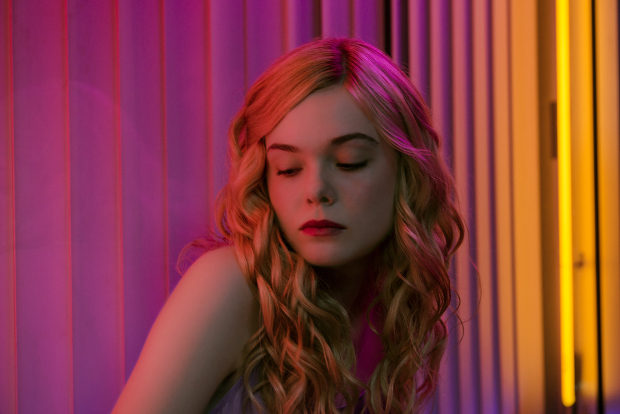 Having landed a crossover cult hit with Drive in 2011 Danish director Nicolas Winding Refn has become a byword for provocative and divisive filmmaking. His premieres are known for being met with boos and cheers simultaneously at Cannes. He has a feud with fellow countryman and provocateur Lars Von Trier. You know the sort of thing.

His latest completes a loose trilogy of increasingly violent and glossy English-language films. The filmstars Elle Fanning as a young model named Jesse who quickly rises through the ranks of the monstrous LA fashion scene. The Neon Demon has no shortage of neon, and no shortage of demons either, but what exactly is the titular beast?

Would you trade your soul for eternal beauty?

‘Cause – my god! Wouldn’t it be beautiful to be wonderful and beautiful all day?

I certainly think that the kind of horror where it’s more about man’s ability to be horrible resonates much more strongly with a younger audience because the real world around them is so aggressive that it’s hard to even imagine anything beyond that. So it seems to me that there is much more interest in the reality of horror, rather than the escapism of horror.

It’s a film with a sort of Faustian setup. Is Jesse making a pact with this demon?

I think she is the Neon Demon! A lot of the construction that Elle and I talked about was, well, what if Dorothy was going to see the Wizard, but she was the one who had the message? And the wizard has the question.

There’s a great scene with Allessandro Nivola, where he’s playing with his handkerchief and he says something about beauty.

He says: “Beauty isn’t everything, it’s the only thing.”

That’s meant as satire, no?

I improvised it and we wrote it down. Because I wanted a male character to essentially explain the essence of the obsession. If I said something about beauty it would automatically create a discussion because we all have a very clear definition of what beauty is and what it represents, because it’s a very complex theme as well as being very shallow. There were two lines in the movie that I wanted to be very, very specific, and one was Nivola’s, because that represents the obsession that has continued to grow and grow and grow since the dawn of beauty. It’s the one stock that’s never gone down. And then, I wanted [actress] Abbey Lee to say one sentence: “I ate her.”

Because those two things are, in a way, related to the opening shot of beauty and death. And that was the basis of the idea for how to visualize the film. And every scene had to have those two contrasts colliding.

But would you really say it’s the “only thing”?

Sometimes. Sometimes not. I think that beauty is certainly very much a singular part of our existence. And it’s certainly a very complex subject, you know? And I think imperfection is beauty. And you can see that one of the two women who actually die in the film, is the character that tries to recreate perfection. She’s actually the one who gets it. Whereas Sarah – with age, the sense of being forgotten, the sense of being used – is the one who regains her inner beauty, and becomes beautiful again.

Slasher films always punish people who have sex. Here it’s the other way around. The sexual ones survive.

Because maybe she’s the poison that effects everyone else. She represents all the emotions of guilt, and desire, and fear and paranoia that are part of this obsession with beauty. And it’s something everyone feeds on.

How would you describe Elle Fanning?

I was interested in her being very young. When we shot the movie she was 16. Her manager – because they heard that I was interested in meeting her – sent over a fashion-shoot with Elle, and it was just like: right away. It’s her. The mission was just: get Elle Fanning. At all costs. I think the idea of making a movie for her generation really appealed to her. And eight weeks later we were shooting.

That was how we met. The reason why it could only be her was that she has that thing. That very special gift that only God gives. That just illuminates. You can’t really define it. Of course, as an actress, she’s done more movies than I have. And then on top of that, she’s just born with this… the way she looks. It’s like magic when she walks into a room.

And she has the ability to touch the viewer too.

Yes, and by doing very little.

And what about this scene where the photographer orders everyone off the set and asks her to take her clothes off? Was there any apprehension?

Are you always playing with audience expectations? Are you trying to provoke?

I’m not a political filmmaker. I make films based on what I would like to see. An audience of one. However, I know that there’s a lot of people like me out there, so that makes me secure when I have to persuade people to give me money to make my films.

And yet each one seems more provocative than the last. Are you finding creative freedom easier to come by?

I’ve always had that. That’s something I’ve always insisted on. I think that maybe I’ve just gotten better at what I do.

The Neon Demon opens in Berlin cinemas on June 23. Check our OV search engine for showtimes.