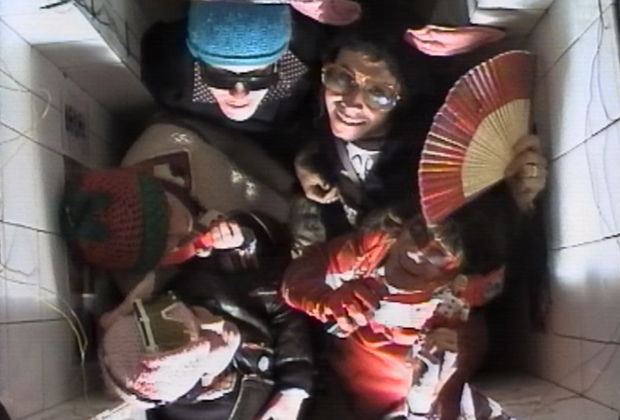 Picture the scene: Berlin in the early 1990s, the Wall just toppled and Mitte, not Kreuzberg or Friedrichshain, is where it’s at. Seems unlikely now, but all manner of dance freaks, music mentalists, anti-fashionistas and architectural impresarios were invading the city centre. Lucian Busse ­captures the Lost World in Berlinized: Sexy an Eis.

Join us on November 12, 8pm at LichtBlick Kino our next ExBlicks (in cooperation with realeyz.tv) for a screening of Berlinized: Sexy an Eis (with English subs) – an insider’s portrait of the cultural explosion in art, music and nightlife that engulfed Mitte in the 1990s. As per usual, a Q&A with the director follows the screening. Unfortunately, no Sexy an Eis.

What made you decide to make the film?

As a documentary filmmaker I felt it was my responsibility to make a chronicle of the time and I’d been filming a lot of footage for my video show, Alien TV, as well. When the Wall came down, Berlin suddenly became a much more vibrant place than in the late 1980s. Sometimes, when I was filming, it struck me how crazy the whole situation was and I’d think to myself, ‘I have to do this and put it in a documentary, maybe in 10 years or something.’

Were you actually part of the Mitte nightlife scene in the 1990s?

It was a very special moment and everyone was extremely driven – if you had an idea, you just did it right away. There was also so much free space. Usually you only get that kind of space after a war or a catastrophe. We could live in houses for really low rent and had the chance, for instance, to open a club for no money. The authorities didn’t really control anything in the early 1990s and this gave us the freedom to fill every little space with our ideas.

How did people react when they came to Berlin for the first time back then?

My New York friends who came to Berlin in 1995 were thrilled by the possibility of squatting in a house or a building and making a bar from scratch. It was impossible at the time in New York – they’d have been shut down with severe consequences if they had done the same thing during the Giuliani years. In Berlin it was just another hotspot, another bar where you could do everything that you liked – drink Jägermeister, take drugs, live your life as you wanted to.  They felt really inspired by our freedom.

It’s a tribute to the drink at BerlinTokyo. It was the essence of the time for me. The ingredients were a secret but nobody was really interested in the recipe. It came in the old, very cheap Ikea glasses and we thought it was sexy – it was served over ice and you got really inspired and drunk from it. There were other drinks, but they didn’t really capture the spirit. You can’t call a movie “Gin and Tonic”. Sexy on Ice was created here; it was a drink for the time.

Mitte isn’t that shiny beacon anymore – that’s reserved for other parts of Berlin. Where for you is the most exciting place in Berlin at the moment?

It’s hard to say. Berlin is going through a process of transformation at the moment. Much of the creative potential of the city today is coming from people who have come from elsewhere. To some extent that’s always been the case, but now foreigners are really flooding Berlin. They’ve heard what it means to live the Berlin dream and in many ways it’s these people who have the most creative potential because they want to live their dream too.

There’s talk at the moment about the influx of expats diluting Berlin’s cultural ‘scene’. What’s your take on it?

I don’t think there is one big scene or really ever was. I always think of it as little cells – you go cell hopping. There’s huge potential. I think the people who argue against the expats or the tourists are really the dumbest fucking fools. They don’t see the potential of a truly multicultural, cosmopolitan city that encourages the exchange of ideas and influences from all over the world. Who wants to be a province?