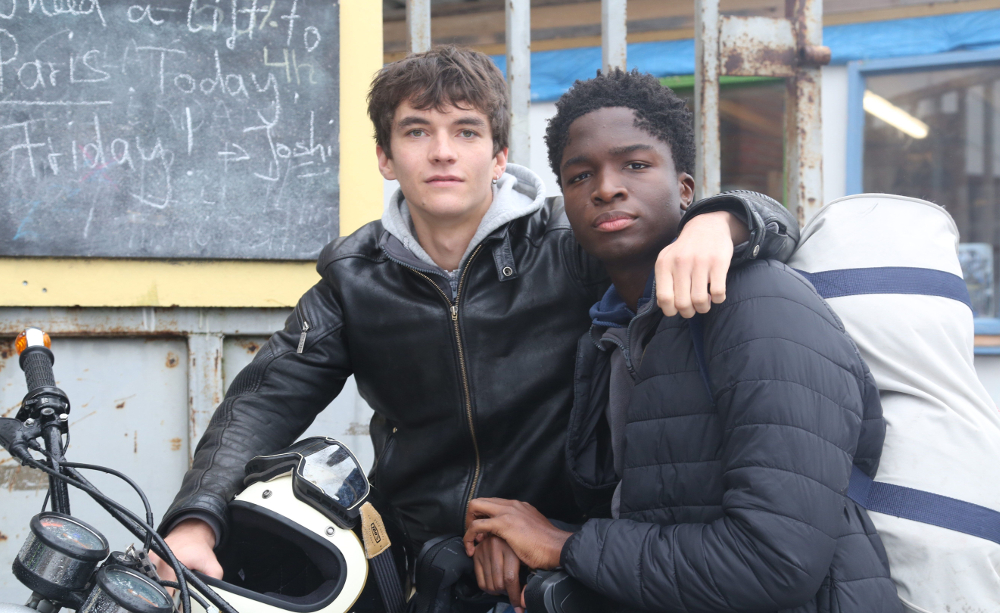 For his first film since his award-winning single-take heist thriller Victoria, Sebastian Schipper goes on a cross-cultural trip across Europe with two teenagers (Fionn Whitehead and Stéphane Bak) in the aptly-titled Roads. It’s a coming-of-age tale rooted in a current context and which sees the director taking fewer technical gambles but more narrative risks.

We met with Sebastian Schipper to talk about his new film, the sleepless nights it provoked and how Kanye West lyrics served as a casting draw…

Your previous film Victoria was a huge success – did you feel the weight of expectation for your next film?

I’m not sure about the weight of expectations… The process of doing something is enigmatic to yourself. For Victoria, the ride from the Berlinale into the cinemas was fantastic but I didn’t know if people would like it. Some got excited at the idea of it being done in one-take, but no one knew if a wider audience would respond to it. With Roads, it’s the same. It’s been about finding a story that tickles you, that keeps pulling you in. It’s exciting and scary at the same time. I have to say that at moments, I was more scared about this than by Victoria. And I’m telling you, Victoria gave me some sleepless nights! (Laughs) People were telling me “Have you lost your mind? This is the most brainless idea!” but in doing Roads, I felt like the ice I was walking on was at least as thin as the one for Victoria.

How so, because Roads feels a lot more straightforward on a technical level?

Well, we didn’t want to do a social drama or a tragedy… It’s not an experiment or a dystopian film – it’s warm. Maybe these stories are a little out of fashion, but I like it. We wanted this to be two kids in a stolen car. They’re 18 and they’re very happy when they find some hash! But before you know it, a story about friendship becomes one where we’re going to talk about borders, poverty, the migrant situation… There’s the importance of not losing sight of the harsh reality of the context in which they’re evolving.

What inspired you to co-write this story with Oliver Ziegenbalg?

To be honest, I had the idea a while back to do a film that could be ‘a summer movie’ more than what you’d call ‘a road movie’. You know, spending summers with your friend away from your family… I remember my first one was a bike trip to the Netherlands, and a couple of years down the road, me and my friend ended up buying a super cheap Lada and off we went to the south of France! I always wanted to find a story that would touch that energy.

It should always be about hope. People have argued with me about Roads, saying “That’s what you call hope?” And yes, it’s definitely what I call hope! And I had the same discussion about Victoria, because I think that that’s a hopeful ending too! It’s a fairy tale, with the princess and the wolves in the dark forest, and she pulls it off!

Roads does feel in many ways riskier than Victoria in the sense that it addresses themes of migration and white privilege. Were those sleepless nights you mentioned about not falling into the trappings of road movie clichés, or even white saviour tropes?

Yeah, one-take is pretty scary, but to fuck up the story of a white boy and a black boy is scarier! The most important decision we made was to do with eye levels, so to speak – that both characters have the same weight within the story. They both have their virtues and they both have their baggage. It was also important to not start with the white kid at the beginning, spend 10 minutes with him and then have him run into the black kid… This story starts when they meet.

I must admit, when I saw the poster, I got a bit nervous about the direction you might be heading in.

(Laughs) “Oh my God, a sentimental story about how we’re all going to get along!”, right?

Exactly, but it really works, in part because the central performances are so convincing.

They’re killer, aren’t they? For casting, I don’t believe in the process of getting all these young people together in a waiting room. I guess it comes from my background as an actor and the fact I hated that. I didn’t want to be that guy: “Show me what you got! Now you’re a refugee – convince me!” No, I meet one actor that has been suggested to me by casting agents and what I’m looking for is the dynamic that is pretty close to finding someone to play with when you’re a kid. I saw tapes from Stéphane (Bak) and said ‘Him!’ (Laughs)

The chemistry between him and Fionn Whitehead is very believable…

That’s so good to hear! So, I met Stéphane, spent some time with him and had him read a few scenes… And then I met Fionn. At that time, I didn’t know that he would be the lead in (Christopher Nolan’s) Dunkirk and I don’t think that the casting agents knew either. Fionn is just great – one of his superpowers is that I think on some level he doesn’t like being an actor! I hope he doesn’t hate me for saying that, but he doesn’t like what some people might call the “perks” of being an actor and he’s not a fan of posing for the pictures or recording scenes in front of a camera for auditions. But that’s a good thing. And when Fionn starts to grab a scene, he’s unstoppable. And so, having met the two gentlemen on their own, I got them together. I got them to do some improvising, some scenes, even some fighting, and it was wonderful.

I read somewhere that Stéphane was very taken with a Kanye West lyric that you wrote on the script… What’s that about?

(Laughs) I put the lyrics to Kanye’s song ‘Ultralight Beam’ on the cover of the script, and he totally clicked with it! I only learned afterward that Stéphane said he’d do the film no matter what after seeing the lyrics. I should keep doing that! But ‘Ultralight Beam’ for me is a crazy, megalomaniac, preaching gospel-pop that’s like a sermon asking for forgiveness. And at the same time, it celebrates life. And the energy of being crazy, as we know Kanye West is in a beautiful and sometimes disturbing way, is sincere. The truth of that song really touched me.

Speaking of music, you worked with Nils Frahm for the Victoria soundtrack and this time, it’s German band The Notwist on score duty. How did that collaboration come about?

It came about way too late. I don’t know why I thought that I needed some British-influenced pop. Don’t ask me – I tried all kinds of stuff and as wonderful as the music was, it just didn’t work. Then I got on the phone with The Notwist. There’s a real erotic energy between pictures and music – you put them together and something happens, meaning starts to form. And I knew that for Roads, this would be a real danger, because if the music was too carefree, then it would come off as me being flippant. Or if the scale tips towards melancholy or dramatic tones, then it can sabotage the lightness of the film. And The Notwist got it just right.

You filmed on location in Morocco, Spain and went to Calais, where the film’s third act takes place. How was that?

I saw things that touched me enormously. The situation of these young men, who aren’t even in camps any more because they have to sleep in patches of forest now, is tragic. But there are all these young volunteers from all over Europe and the world, and it’s also very touching to see these young people who are so involved. And you meet the migrants, listen to their stories and kick around a football with them. It’s profound and yes, there’s some hope there too. I didn’t see any politics there or any finger-wagging about ‘right’ and ‘wrong’. And all the migrants I talked to greeted me with a smile and there wasn’t any “shame on you” attitude. People were open and interested, and it helped me profoundly to be there.

Lastly, the title of the film – why pick such a simple one?

I didn’t want to give it a taste, a tone. I didn’t want to do a social drama. I needed a strong word that didn’t have a taste by itself, if you see what I mean? I like ‘Roads’ and being on the road as a place – it’s a trustworthy place.

Roads opens in Berlin cinemas on May 30. Check our OV search engine for showtimes.