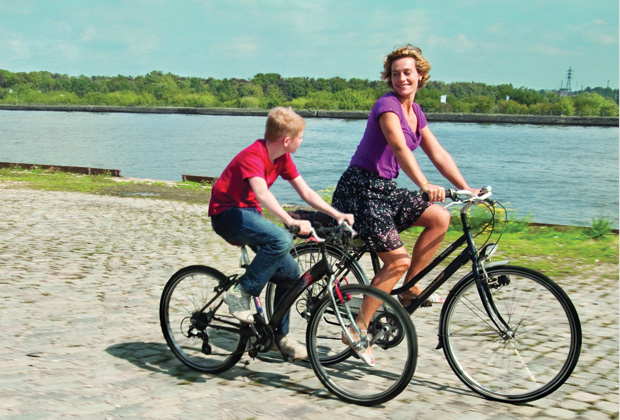 For nearly 20 years, the Dardenne brothers have been making films known for their uncompromising exploration of society’s disadvantaged and underprivileged. Winners of two Palmes d’Or, their vision insists on poetry, allowing bleakness without denying hope. With Le Gamin au vélo they deliver their most optimistic opus to date.

Would you say that this is your sunniest film to date?

Well, it’s definitely the film with the most sun in it. It was the first time we filmed during summer, and it’s also the first film in which the person who functions as a breath of warm air, Samantha, is present almost from the very beginning. So we have two things, which make this film lighter, more optimistic.

Do you hope to change reality?

A film can provoke reactions in viewers: something small, maybe, but something that allows the viewer to feel something unknown, to think, to be moved. Not to change the world. It’s collective action that achieves that kind of objective, not art.

Samantha is almost a saint. She is patient, courageous… she invests money, time and emotion.

Why not? Cyril is looking for love, somebody interested in him: somebody in whose eyes he can construct himself. There are several points of physical contact in the film. Samantha touched the kid, felt his distress. She’s not stupid. She takes in a child, on the weekends, who has no mother and whose father doesn’t care. The viewer would ask, “Why is she doing this?” But there doesn’t have to be an answer. She does it. The viewer sees it and says, “Okay, some people stop when they see an accident – others don’t.” There is no other motivation.

Since we know nothing of Samantha’s motivation, is the film ultimately dealing with the banality of doing good?

One could call it the banality of goodness, this kind of primary humanity – a woman overwhelmed by this kid who attaches himself to her and communicates his immense distress.

Yet even with Samantha, there is a distance to the kid.

The actress asked us whether she should act maternally. We said, “No”. This lets the viewer come in a lot closer. The less the actor does, the more the viewer does.

Normally you don’t work with stars. This time, you chose Cécile de France. Why? Was there a commercial aspect to your decision?

Sure, Cécile is a well-known comedienne. But what really interested us was her, as a person, a body, a smile, a presence. She brings this warmth to the film; the viewer is caught up in it. And she wanted to work with us because of the way we work with actors. She knows our method and accepted all our conditions: no other films; 40 days of rehearsals before filming starts. That’s like working on two films. The actors don’t come with assistants. They are just with us and we are just with them. We do everything ourselves.

Not at all. It’s expensive to have actors rehearse for 40 days, to film continually, to keep all the stages, for 90 days, throughout the filming process, because rehearsals take place on those stages. Our films are expensive. Not in comparison with American films, but they cost €5 million. We could manage with €4 million if we worked stage by stage, etc.

Do you ever disagree on an aspect of filmmaking?

No. If we did, we couldn’t work together. Sometimes, we work alone on something outside the cinema. Working alone, you sometimes find that you disagree with yourself. You can’t find the solution you are looking for. Here, it’s the same thing. You’re looking for something – both have an idea of what it could be but neither can find it. But that’s not disagreement. It’s discussion and debate. It’s a working relationship.