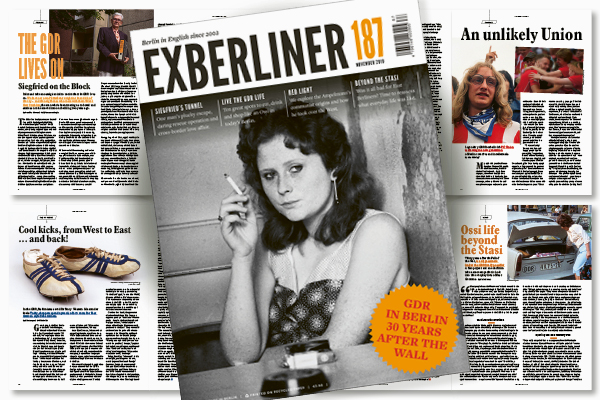 Thirty years after the Fall of the Wall, Exberliner explores what’s left of the GDR in our everyday lives: From our Ossi neighbours to the best restaurants, bars and shops to Experience the Ostberlin way of life; from iconic shoes to the Ampelmann conquering the West and the legendary Köpenick FC Union’s drawing unlikely post-Wende fans – the old East is all around us! Also in this issue: Painter Norbert Bisky on coming to terms with his privileged GDR youth, what’s happening to Alexanderplatz’s surviving Plattenbau giants, how Berlin stages approach the fateful date of November 9 – and much, much more.

OF WALLS, SPIES AND TUNNELS – Herr Strehlow on 81 years in Berlin

FROM DEDERON TO MITROPA – Ten places to eat, drink and shop like an Ossi

LIFE BEYOND THE STASI – Was it really all bad for East Germans? Time to reassess.

AMPELMANN TAKEOVER – How a little communist man conquered the West

NORBERT BISKY – The painter on fighting his DDR nightmares