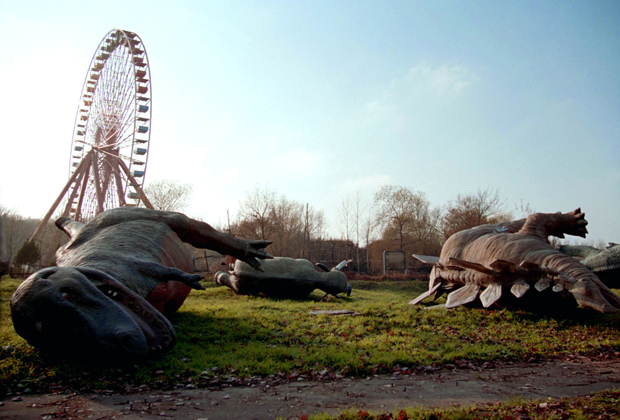 Few actually know the whole tale of Spreepark – the dilapidated GDR amusement park decaying on the banks of the Spree in Treptow and the stuff of artist/expat wet dreams when it comes to visions of Berlin.

But Peter Dörfler’s Achterbahn gets behind the fences, guard dogs and security to give us the incredible, sordid story behind the park.

The director discusses his documentary with us here and in person at our upcoming monthly EXBlicks event on October 24 at Lichtblick Kino.

How did Norbert Witte, the man behind the park, react to the idea of the documentary?

Norbert was immediately open to the idea. On the one hand, I think there’s a natural relation between carnies and actors; on the other, he saw it as a chance to give a more nuanced version of the events and to restore himself in the public eye.

Pia, his wife, was initially very sceptical and rather against the idea; however, she changed her mind once we met personally. She hoped that the film might help her son. There was never any conflict – all family members were very cooperative.

How long did you spend with the family for the shoot?

I regularly shot the family over the course of a year. That was important, as I wanted to show a certain development in Marcel’s legal situation in Peru. We built up reciprocal trust over time. The time we spent with Pia and Sabrina in Lima was extremely intense and emotional – the highly dramatic, and in part dangerous, events did ultimately culminate in the tragic renewal of Marcel’s sentence after appeal. It brought us very close together.

One could view the documentary as an attempt at restoring his reputation after the almost exclusively negative press he received – was this your intention?

No, why would I want to do that? My intention was to recount the events in as accurate, fascinating and objective a manner as possible – that’s very important when you’re constantly dealing with statements that contradict one another. I omitted other statements Norbert made regarding the deal as they seemed improbable.

In actuality, the press contributed to his relatively lenient sentence. By taking such a partial stance against him, a certain extent of restoration took place automatically.

What about Witte’s guilt?

Well, regarding Marcel’s situation (now eight years in prison – sentenced to 20), the film is unequivocal and Norbert also finds himself guilty for his son’s plight. That’s the big drama of the film.

What do you feel your responsibility was when approaching your subject?

My most difficult responsibility was not to cause Marcel any further problems. For example when he tells that while in investigative custody he was hit in the face with a metal bar by officials – this kind of thing can endanger a prisoner in South America – there, we came to the limit of what we considered responsible, because, at the same time, we wanted to inform the public of Marcel’s fatal situation.

It’s also very important to me not to denounce my protagonist – or even make them ridiculous – just to entertain the public. After the film, they should be able to still look their neighbours in the eyes.

Did you get feedback from the Witte family regarding the finished film?

Yes, it was often difficult for Norbert, particularly in the scene in the Hamburg theme park, where his cousin calls for the death penalty against people like him; or when his business partner at the end tells him, he can’t afford to destroy another child of his.

Finally, however, he was very taken by the film. It was evident that he wasn’t going to be exonerated, but at least there’s a different side to it.

Pia was very relieved, as she’d previously had bad experiences with publications. She said she was proud of me as I’d kept all my promises to her and made a good film – that was very gratifying.

Marcel was also very happy with the film and immediately wanted a subtitled version to show in Peru. He said that the film shows that, unlike the perception in Peru, the Witte family isn’t a gang of drug dealers.

Do you know what’s become of their new business and whether Marcel’s situation has developed?

Last time I saw Norbert, in the spring of this year, he was in the process of finally setting up the circus tents he talks about in the film, albeit in a different location. I’ve heard that his wife and daughter run some type of café in the Spreepark – the park has partly been re-opened to the public. I’ve been meaning to go, but never have time, also due to the release of my new film, The Big Eden, in December.

With Marcel, nothing has materialized. After Achterbahn was released, it seemed like the film may have an impact, but these hopes have so far remained unfulfilled.