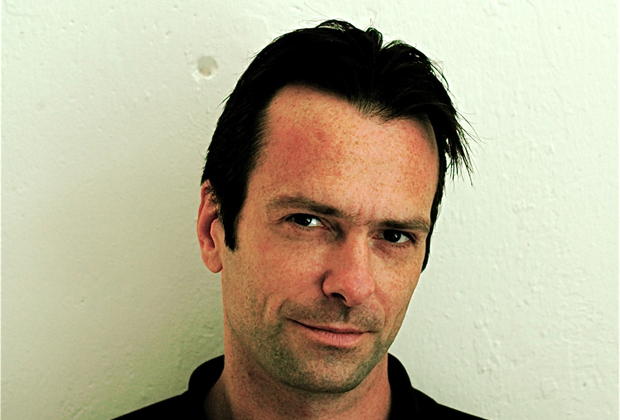 While street art and Berlin seem natural bedfellows, Torsten Königs’ Pin2011 shadows the titular street artist to his “tragic” end. Throwing up questions about the artifice of art and its players, the documentary explores Berlin street art’s uneasy relationship with the institutional spaces of the law and the gallery.

The West Berlin-raised DIY director discusses his film here and in person following the screening of Pin2011 at EXBlicks on March 19 at Lichtblick Kino.

In the film, Pin2011 remains anonymous.  Was this your decision as a filmmaker or his clause as a street artist?

It was his decision, because that’s also the topic: what is fake? What is reality? Until the end, it was really unclear whether this would work for a film. In street art, you have your sign, you have your pin or your tag and you are not so important. It’s the same with the faces of Omsok [Pin2011’s series of 3D street figurines] where you can project your own face, something different, into the figure.

How did you two meet?

My partner met him at Mauerpark because he was selling these little figurines. I was really curious. It was something about myself too I think, because I make films but it’s not about earning money. It’s the same with street artists – they’re driven by something else.

There are so many street artists in Berlin. Why him?

Sometimes you get the feeling you meet somebody for a reason. He was very nice, the right age, he was really from Berlin and it was not fake – it was real, like, I could see it real, and I liked his work. Especially the 3D and the sculpture – that’s something really special that I like about him and that I feel nobody is doing. His art is not like Banksy, always thinking about what he’s doing and how it fits. He was making something he could do completely by himself. So I tried to do the same; I didn’t ask anyone for money, for a camera, nothing, because I could do it all independently.

Did you have much involvement in street art before the film?

Eh, I’m from Berlin! [laughs] I grew up in the 1980s in West Berlin. There was a really hard graffiti scene in Berlin then – not so much street art, but graffiti, that was the time graffiti came out in Berlin… In Berlin things are always happening and changing. Berlin is like life.

The film shows him wrestling with seeing his work in a commercial gallery space.

That’s the point about street art. I think it was better for him to come to the gallery, but at the same time, it’s the opposite point of view. Street art is something you put on the streets and then the work starts and it’s changing, changing, changing. Part of it is about just letting it go. In a gallery, it’s always to do something, like God, forever, until the work falls down – which is a totally stupid idea. Street art is nothing to do with forever. It’s to do with the moment. It’s much more important to do it. It’s something that really has to do with the beginning of art. It’s fascinating, because you have people who are more free… hopefully. It’s not his goal to sell things the people. That’s the point, he wants to live through his art but I don’t know, it’s a question for artists. I think for street artists it’s much harder. He says he’s doing street art because it’s the only thing that satisfies him – hopefully that’s what every human being is trying to search for.

Was there danger in making the film, shadowing a street artist?

If you’re from Berlin or from West Berlin, it’s a little bit different about this danger thing, it’s about being free. It’s like the game of cops and robbers, it’s an adventure! Also, you see it in the film, sometimes police in Berlin can be real assholes, but sometimes they’re really cool. We had a lot of luck.

What would you like an audience to take from the film?

Graffiti is nothing new anymore; you hear everybody talking about it, everybody has an opinion, you hear Banksy this, Banksy that and some people don’t get the point…. But to have changed the view of people as they come out of the film, to have a different view when they see something on the street. That would be great. Sometimes small things change your life.

The film starts and ends with Pin2011 being shot by the police, but his fate remains ambiguous.

It’s more a symbolic ending. The film is a docufiction; some things didn’t happen, but most really did. I don’t want to say which it is with the end. In a way, he died. In a way, physically, Pin2011 died because now he has to make a decision about how he is going on. It’s a lot about Indian philosophy too; death doesn’t mean the end. Death can also be the beginning of something new.