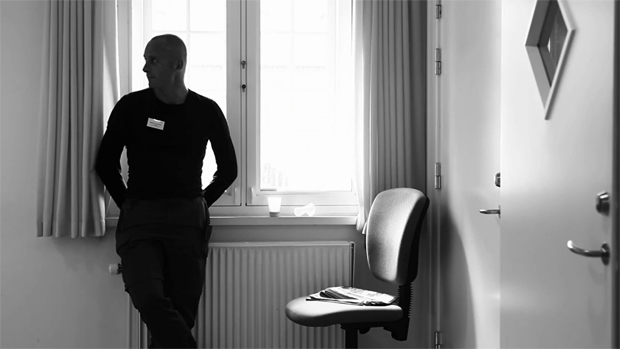 On Saturday, June 22, 8pm, Ivalo Frank will premiere “Open” at Babylon Kino in Mitte, to be followed by a Q&A with the Director and accompanied by Greenlandic cuisine.

Based in Berlin and Copenhagen, Ivalo Frank’s documentary work has taken her from Bosnia to China and back to Denmark for her latest film Open, in which five criminals talk about their loneliness and longings from the confines of a secure psych ward: the forensic psychiatric unit R3 in Risskov, Denmark.

All five (four men, one woman) are from Greenland. Their treatment, thousands of kilometers from their place of origin, was ruled a human right’s violation in 2006, but efforts to establish a secure ward in Greenland remain hampered by financial bickering between Greenland and Copenhagen.

The strength of this relatively short documentary lies in its absolute partisanship. Filmed in sharply defined black and white, a quiet camera concentrates only on the five individuals concerned: there are no interviews with doctors, prosecutors, carers, victims, or family members. We are, in fact, well into the substance of the film before we learn which perpetrators committed which crime. By the time these elephants tiptoe into the room, Frank has made her case: that these are lives defined by a criminal past but arrested in a stagnant present, and unjustly defined (to the detriment of healing) by the anguish of separation from homes and families.

Crimes committed cannot be reversed. But enlightened democracies are committed to supporting a system of punishment in which the prospect of social reintegration plays a large role. If these are truisms that ostensibly form part of our social education, it’s all the more important that filmmakers such as Frank come along to remind us, in the simplest and most unequivocal of terms, that two wrongs do not make a right – and that standing up for what is right is part of what good filmmaking should be about.