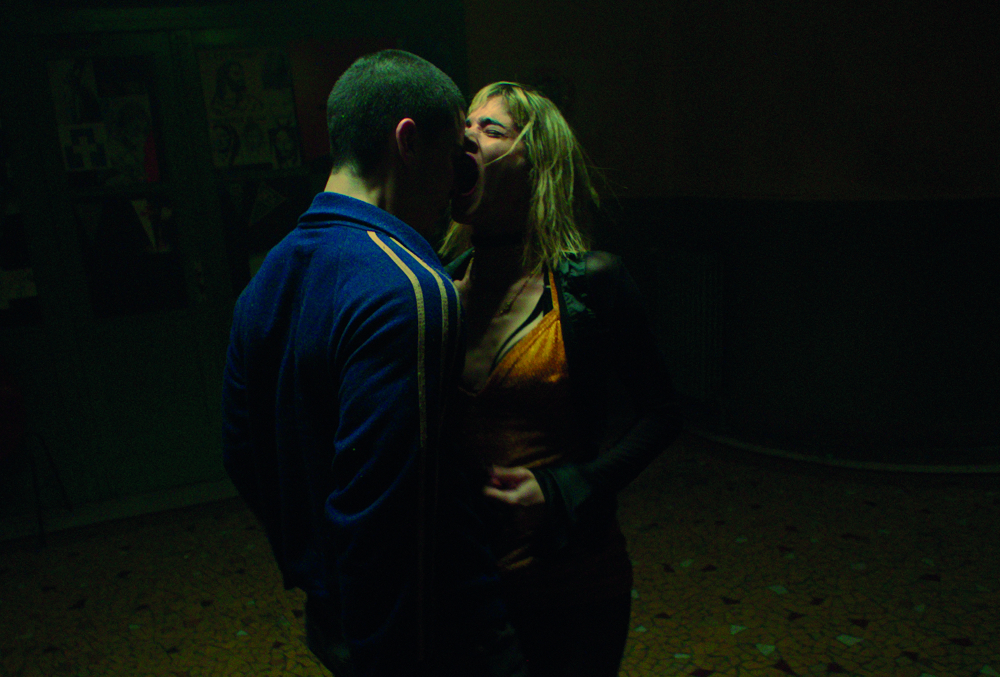 Franco-Argentinian provocateur Gaspar Noé is no stranger to controversy. He embraces it in his narratives as well as in his marketing for his new film Climax – the posters read: “You despised I Stand Alone, you hated Irréversible, you loathed Enter The Void, you cursed Love, now try Climax.” Supposedly based on true events and set in the mid-1990s, it sees a dance rehearsal after-party take an unexpected turn when the sangria bowl is spiked with LSD and the troupe start tripping. We sat down with Noé to discuss his horror-inflected psychedelic chamber piece which is proving less divisive than his previous offerings…

Climax is one of your best reviewed films, with not as many reported walk-outs as the previous ones. Disappointed?

[Laughs] Not at all. There are apparently some people fainting in this one, so I haven’t lost my touch. I’ll tell you – I was afraid that people would think it’s too funny. But the movie is both funny and scary, in a gentle way. Compared to my other movies, people seem to be coming out of this one with a smile. It’s not only linked to the fact that the dance scenes are hypnotic, but also to the fact that Climax plays out like a fairy tale or a fable. And probably because there’s a sense of humour in this film that’s more evident here than in my other films. One day I’ll try to make a serious movie, but I’m not there yet.

There’s a very overt ‘French’ aspect to the film – at one point, the film announces that it is a “French film and proud of it”.

I put that title card in at the last moment, just before the Cannes screening. And it makes sense, because the movie is kind of about freedom, and that’s very French. You’ll never see a movie like this coming out of America nowadays. From South Korea or Japan, probably, and maybe the Austrians or Danish could do this movie… Maybe Germany… But not America. And I like French humour, I like living in France and I like that people financed this movie with only just two pages of script. The money is French, the set is French, the story is French and half the music is French too!

Of course, that’s also me kind of making a joke about the rise of nationalism… Everybody is fighting for a flag and I would never fight for a flag in my whole life, but I would fight for atheism. When people ask me if I believe in God, there’s a sentence in French that I always use: “Athé et fier de l’être” (“Atheist and proud of it”). So, when you read in French “A French film and proud of it”, you immediately think of atheism.

It’s not that often that you get to see French youth represented with such diversity on film.

True, but if I had made a movie based on contemporary dance, it would have been very white and far more bourgeois. Middle class people want their child to succeed in dance, they go to opera school… But when it comes to the sort of dance seen in Climax, I admire it a lot more. It’s fresher, more spontaneous, and almost all the dancers come from the suburbs. But seriously, I had no selection in mind, in terms of background or gender. I also didn’t have any preference about their sexual tendencies or genital origins… I just wanted to do a movie with the best dancers I could find.

Was the casting difficult?

I cast about 50 people and then decided to stick with 23 – if you include the young boy. I wanted to like each one of them, and if I didn’t like each of the dancers, I would have reduced the cast more. But there’s not one character that I prefer to the others ones. Probably the most important one initially is the character played by Sofia Boutella, but then there’s the mother and her boy, the brother and sister, and the girl from Berlin because she starts the party…

Ah, the girl from Berlin…

Germany wins in the end! [Laughs]

You shot Climax chronologically, if I’m not mistaken?

Yeah, I convinced the producers to give me money for a movie that was supposed to be half documentary, half narrative. I asked “How much money can you give me to make a dance movie?” and they told me if I could make a movie for €2 million, I was free to do whatever I wanted. The fact that the movie takes place in one location and that we could shoot it in 15 days meant we earned a lot of time and could shoot chronologically.

The dialogue is very raw and sounds natural throughout. How much was improvised?

All of it. A lot of the dancers weren’t actors and so you just explain what the situation is. And if they’re not actors, they don’t want to learn lines. I was telling them to talk about the shows they were preparing, about the flag, about the other dancers… I told them to make it funny, sad, or emotional, and I would film them for about 20 minutes at a time. In the end, I kept the funniest parts of their improvs. Sometimes they were being themselves and sometimes not. For example, the two guys who are being overly sleazy about the girls are actually very gentle, but they are pretending to be mean in front of each other, and I couldn’t stop laughing during that take, so much so that I had to cut. For another dancer, the guy who talks about his ex-girlfriend leaving because she got pregnant with another man, I still don’t know to this day if that’s a true story or not. But the way he was telling the story was so touching that I kept it in.

So this sense of improvisation shaped the narrative?

Yes, of course. I would ask them what they would enjoy and what name they’d like for their character. And in the second part of the movie, when things get a bit crazy, I would tell them to portray the kind of craziness they would enjoy the most. I would say “I won’t tell you what to do – just bring your ideas and we’ll push them further.” Initially, I didn’t know who would end up with who! I knew that the woman being cheated on by her very stupid alpha male partner would end up getting some sort of revenge on him, but nothing was planned beyond that. The only thing I knew was which take was going to be the last shot. And because of that, I did suggest some lines to the girl from Berlin at the beginning of the film so that the reveal would make sense at the end of the movie…

The hallucinogenic effects felt by the dancers are mirrored by the camera movements and your lighting design, which reminded me a lot of Dario Argento’s Suspiria, a VHS copy of which is seen at the start of the film…

Yes, but I’m reminded of when I saw 2001: A Space Odyssey at the age of 6 or 7. That’s my first memory of being in a movie theatre and that star gate scene was my first drug trip ever. And after years and years, it’s still probably one of the best descriptions of a hallucinogenic rush that has ever been put on screen. There are so many filmmakers – David Fincher, James Cameron – that say they are obsessed with 2001 because they saw the movie when they were very young, and because it’s a movie that really talks to the audience in a non-verbal way, much like Un Chien Andalou or Eraserhead. As for the framing device at the start of the film, there’s one film missing that I forgot to add: Shivers, by Cronenberg. There are a lot of clues at the beginning with those VHS tapes and books – they were my obsessions when I was 20, and those references were a way for me to say that I’m not inventing anything, I’m replaying with old stuff.

Have you seen the new Suspiria film?

I have a love-hate thing going on. But Climax has a lot of parallels with the original, with the confined space, the dancing…

Suspiria – the old one – made sense to include, but also because of the sexual aspects of the Giallo films. One film which influenced me a lot for this film is another movie with dance and a lot of colours: Inauguration of the Pleasure Dome, by Kenneth Anger. That was a trip session for me.

Your films tend to feature people at breaking point…

Yeah, but life is a sequence of breaking points! Each time you’re close to it or in it and think “This is the shifting point of my life,” there’s another… Life is shifting. Several times a year because of something you do or something someone else does, or because of the will of history… I like movies with drama, whether explicit or more implicit and hidden. Even when you read Hans Christian Andersen stories – they are as dramatic as any movie by Fassbinder!