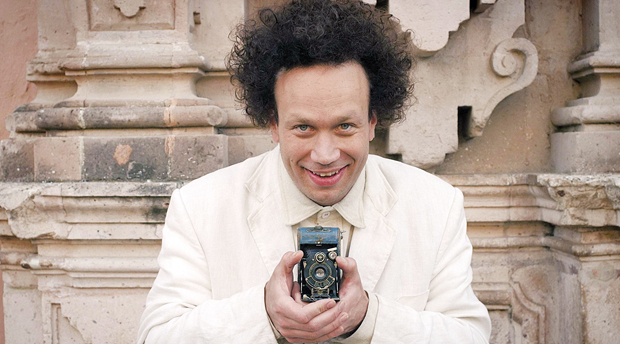 What made you decide to tell this story, in this particular form?

My original idea was to make a documentary of why his experiences in Mexico failed. I’m always interested in unmade films. There are millions and millions of unmade films. But documentary tends to look at things from the outside, and I’ve come to be more interested in seeing things from the inside. I had known a huge amount about Eisenstein because I sat down and made notes, or through osmosis, by reading and looking and travelling to the places he’d been. I started writing dialogue that he might have had in Mexico. I like the concept of feature film as essay. When I started working with these historical figures I would argue that there’s no such thing as history, only historians. History is unvisitable, nothing can be proven. And we also know that most historians are liars.

Are there any you trust?

Well perhaps if you take Winston Churchill, a very good storyteller but a lousy historian. We tend to read things which are attractive, do we not? Every historian has a vested interest. The best thing to think is that history is only a branch of literature.

And what of your own vested interests? Why is Eisenstein’s sexuality of such interest to you?

When you go to a foreign country, you become a different person. You don’t have your relatives, or your wife, or Stalin breathing down your neck. So you can throw away certain self-censorship things. And I suppose not only in his personal life, there are things in the footage he shot which are nothing like he had shot for the first three films. But he was always curious about his sexual preference. When he came to [Berlin] on his way to America he immediately went around the sex shops and bought up literature which he could never find in Russia. I do believe our sexuality is key to a huge amount of our personal activity. The film goes on about Eros and Thanatos. I don’t know anything about you but I know two people fucked to make you and – sorry – you’re gonna die. The rest is an open book.

Both the Mexican and Russian perspectives on death are explored in the film. Which is more you?

I’m sure, as a European, I probably gravitate towards the Russian one. How many times have you seen a dead body? I once went into a cutting room in the BBC and found a dead man sitting on the loo. That was a bit of a shock.

Are you still well regarded in Russia?

My film The Cook, the Thief, His Wife & Her Lover is extraordinarily popular in Russia. It came out at the time of Gorbachev and they could see what happens when capitalism comes to communism. Vulgarity, lack of sensibility, criminality, corruption, which is all part of that film. It was enormous because what was prophesied in that film came true. [Russia] is full of vulgar, impossibly corrupt oligarchs, who seem to be running the country, running the restaurant of Russia if you wish.

We never even asked for Russian money. People kept saying that you ought to go to Moscow because that’s where all his film is, but we never approached them because most of our film footage came from either MOMA in New York or the Cinémathèque Française in Paris. The bits and pieces of ¡Que viva México! are everywhere. When I found the actor to play the part – and I hope you agree he plays it very well – it was such a weight off my shoulders that I took two months off and wrote two more scripts. One is about the very first film festival ever, which happened in La Sarraz in Switzerland. It was interesting that because Switzerland didn’t recognize the Soviet Union, Eisenstein and his friends were there illegally and so they were being chased all the time by the police. And then the second film is simply Eisenstein in Hollywood.

So there will be a sequel?