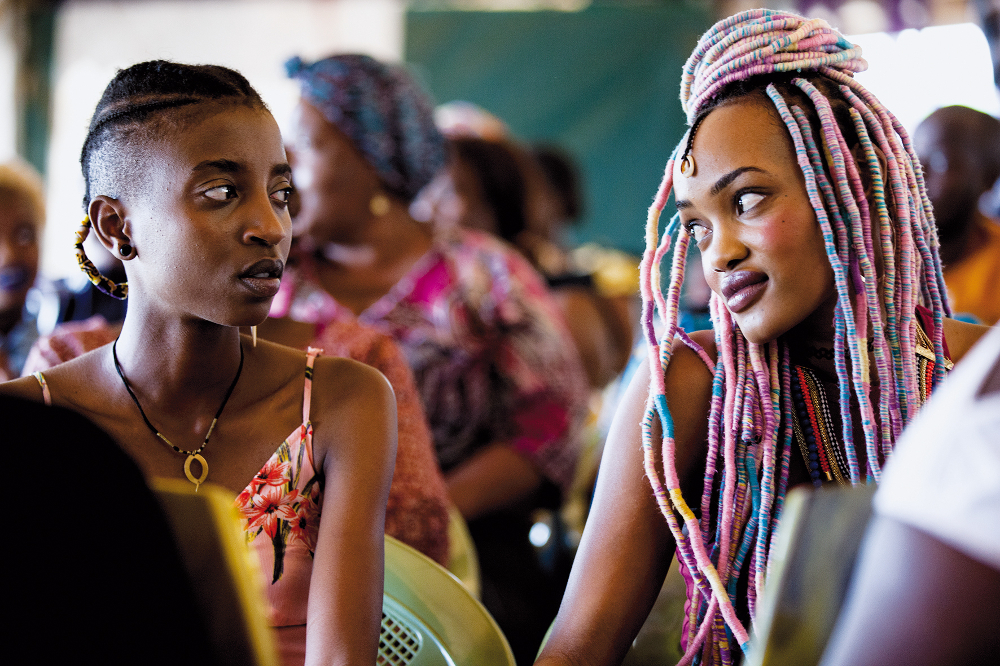 Rafiki tells the tale of Kena (Samantha Mugatsia) and Ziki (Sheila Munyiva), daughters of rival political candidates who fall in love against a backdrop of widespread homophobia. Last May it became the first ever Kenyan feature to premiere at Cannes, shortly after it was banned in its home country on the grounds that it “seeks to overtly promote lesbianism”. The ban was temporarily lifted for a week last September, and the film promptly smashed domestic box office records. It hits German screens on Jan 31.

How did you cast your inexperienced leads?

Sheila had done some TV work, and she was super bubbly in a way that felt right for Ziki. I saw Samantha in the crowd at a party, and it just hit me that she was exactly how Kena should look and behave! So I asked her to audition and she nailed it, even though she’d never acted before.

How did you overturn the ban in Kenya?

We took it to court, on the grounds that our constitution allows us freedom of expression. All we asked was for the ban to be lifted for seven days so it would meet the minimum eligibility requirements for the Foreign Language Oscar. Our judge understood the challenges that artists have faced in Kenya fighting for their rights to express themselves. But now we’re back in court fighting a broader freedom of expression case. The laws in place at the moment are British colonial laws. They don’t reflect the current constitution, which was created in 2010.

And what was it like to bring the film home?

It was incredible, because we’d made it for a Kenyan audience. In that single week it became the second highest-grossing Kenyan film of all time! A lot of queer people told us that they finally felt seen and validated. And many came out to their families that week, using the film as a starting point. It keeps me optimistic about the future. There’s currently a case for the decriminalisation of gay sex in court, so we’re eagerly awaiting the result.

Do you think the censors’ response would have been different if you were a man?

I think the response was driven more by institutional homophobia than misogyny. But the head of the classification board would not have spoken about a male director the way he spoke about me. There was a direct, personal assault on me, my reputation and my work.

Did you keep the depiction of sexuality gentle in anticipation of a potential ban?

Not at all. I was focused on creating a film that honoured the characters and their love for one another. None of my artistic decisions were dictated by the possibility that the film might be banned.

And were you mindful of how you were presenting Kenya to the rest of the world?

No, just as I’m sure American filmmakers aren’t mindful of a Kenyan audience when they’re representing America. All that mattered to me was creating an authentic sense of time and place. I’m not interested in pandering to ideologies of what Africa is or is not.

What inspired the film’s colourful visuals?

I was paying tribute to female artists who influence the way I see the world. Ziki’s living space is inspired by Wangechi Mutu, Kena’s by Mickalene Thomas, in terms of how those artists use texture and colour. And the cinematography was informed by Zanele Muholi, an amazing South African photographer who works in a queer space.

Was it hard to secure funding?

We don’t have any government funding in Kenya, so we had to apply for grants elsewhere. We had to cast our net very wide to obtain money from numerous sources, like the EU’s ACP (African, Caribbean and Pacific) programme. It took seven years in total!

The film’s sole gay male character never speaks. Why is that?

I thought his presence was enough – it’s evident at the end that he’s sharing a moment of solidarity with Kena. But this also serves as a metaphor for the queer community’s silence in Kenya, or rather how the community has been forced into silence.