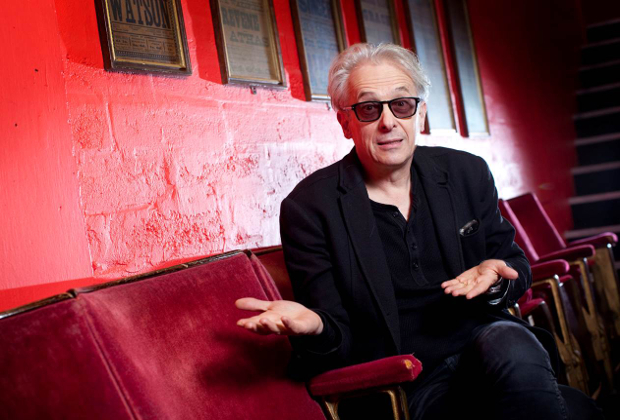 If you have ever thought you were destined to create the next “Oh, Boy” but you’re not sure how to get started, you’re in luck.

Festival creator Elliot Grove kicks off the weekend with his acclaimed 99min Film School lecture, followed by a Booze ‘n’ Schmooze afterparty. The weekend continues with a Saturday Film School on May 11 and an Introduction to Screenwriting on May 12.

The film school celebrates its 21st birthday this fall.

You grew up Amish in Canada. It’s not a typical background for anyone, especially a filmmaker.

Other people find it unusual but to me, it’s normal. From a young kid on a farm and in Sunday school, my experience has always included storytelling. I’m living proof that it is possible to make a career as a filmmaker without going through the so-called ‘standard route’.

Which came first, the 99min Film School or the Raindance Film Festival?

The training started and then people started making films again, but making it outside of the film industry model – true independent film making. And that’s why I started the festival, to give them a place to show it and there wasn’t such a place when we started Raindance and still, you can argue, there is not such a place.

What’s the trick to making an indie film?

It’s important to have a great screenplay, a great script. Then, you have to think about how you can afford it. I look backwards when figuring out the costs. You have to consider the number of actors. Fewer actors mean fewer mouths to feed. Special effects and CGI are really expensive; so just abandon that – unless you have a mate who will do it for you for free. What costs the most money is changing locations. Imagine you’re shooting a film in Kreuzberg and move to another area in Berlin, say across the city; it could take you a couple of hours. You have to move actors, equipment, figure out the cost and logistics of transportation. Films like Clerks, Paranormal Activity, they don’t change locations and still find success.

You started the film school 21 years ago. What has been the biggest technological improvement over the last couple decades?

Filmmakers starting out must ask the question about cameras. What to shoot on? There are alternatives to the expensive traditional models – the iPhone, for example, or the go-pro camera. These new cameras have solid state technology meaning that the compression, the number of pixels per frame for the new go-pro camera, for a few hundred euros, is the equivalent of that of a big camera that costs tens of thousands and this is astounding. With Youtube, the whole distribution model has changed. The fact that you can make money on digital technology very cost-effectively is one thing that has democratized filmmaking. The fact that you can distribute your film now and make money on the Internet has been the single most significant change.

Are you saying anyone can make an indie movie?

You have to have passion for filmmaking and visual storytelling. And of course, never ever listen to the word ‘no’ or ‘can’t’. Those are the words most people think of when they think of a career in the industry and with those two words, you’ll never do it. You don’t need to be young. All walks of life and all ages are welcome as long as they are interested in what happens behind the camera.

This is the first time you’ve had the film school in Berlin. Why now?

We chose Berlin because it’s a great filmmaking community and a cultural community that connects with the Raindance zeitgeist. We don’t work well in more conservative cities.

When people hear the name “Raindance”, it’s only natural to be curious about the relation to Sundance. What’s with the name?

There are no similarities to the Sundance Film Festival. It’s called “Raindance” because it’s the dance you need to do to make your film… and because it always rains in London.