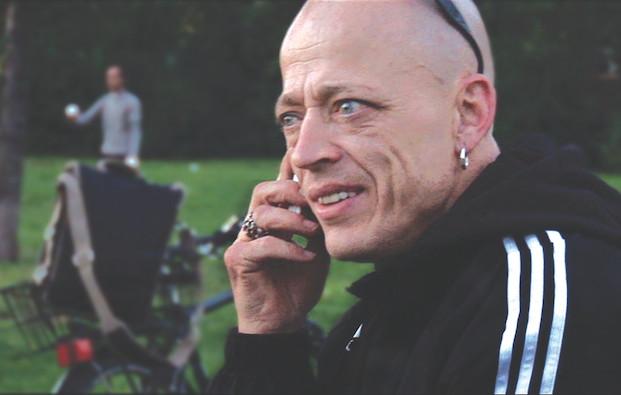 There’s no desert and no real sex in Ralf aka Sex in der Wüste but in the mind of Ralf, it may have actually happened at some point – in the middle of Kreuzberg. Ralf embodies the spirit of the wingnut like no other, simultaneously crazy, repulsive and loveable. Headed by Russian director Ikiru Genzai, Berlin-based Red Dragon Film Collective recorded six months of Ralf’s life to give a portrait of the “Berlin lifestyle”.

Don’t miss our screening of Ralf aka Sex in der Wüste at the next installment of our monthly EXBlicks series (in cooperation with realeyz.tv) on August 20, 20:00 at Lichtblick Kino – always in English, always with the filmmaker in tow. And there may be a surprise awaiting at this one.

Was Ralf excited to do the film? How did he react to the idea of being on camera?

To me a main sort of requirement for a characteristic of a good documentary protagonist like this is a personality that wants to be, that needs attention, that requires attention. He definitely had that. No matter what he said, I think he was always flattered and excited about it. There are scenes in the movie where he actually screams at us, and behaves like a dick. There was a lot of that as well but underneath, I think he was always happy to be filmed. I think it did him good either way.

How has he gotten by after the film?

He was in quite a bit of trouble for a while, but less than he could have been. Thanks to a sort of certain humanity in the German penal system, he got out of going to jail and he’s been in sort of a therapy rehab. It’s a compulsory rehab situation, which he’s out of now.

This is not really firmly established in the film, we were not trying to do that. But it is mentioned on and off in his history and his life, that he was in jail for 17 years, that he’s had a lot of difficulties, and that this has shaped him as a person – basically, falling as far down as he can get and sort dragging himself up, which is exactly what he is going through now.

And his interaction with other people? With women, it can be pretty creepy.

Do you think there’s a drastic difference, though, between how he treats women, and the way he’d treat just anybody?  Isn’t it just general communication, that type of communication you get at a party nowadays, between younger people? I mean, I think that at an exterior level there’s very little difference. Honestly, it’s basically the same, that’s just what happens at a party.

No, it’s true, it’s true. I mean, there are two ways of looking at it. I’m not trying to justify it. I mean he is disgusting and everything, but he’s also just more honest, and more straightforward than most people would be, and as such the whole concept is kind of questionable.

Was there any part of the film that Ralf was unhappy with?

No, oddly enough, because I would have expected that from him, but just generally somehow he doesn’t seem to care, because you know it kind of makes sense, he’s well aware of the stuff that he’s done, and he’s done way more stuff than was portrayed in the film. He’s in a pretty bad situation. Sadly enough, he’s also disconnected from a lot of his friends and he’s got really nothing else to lose.

Well, he definitely has a kind of intensity, like an artistic intensity but without the focus.

Yeah, he is very strongly focused but on certain kinds of things. His only mission is to survive basically, so, he’s good at that. He’s a survival artist.  If there is such a craft, he’s the master!