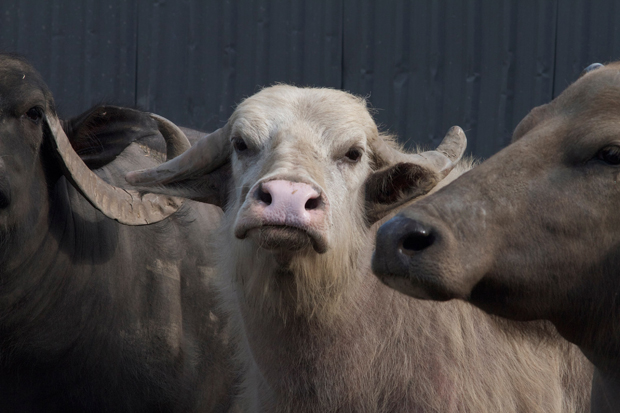 From April 12-23, Arsenal is holding a full retrospective of Côté’s work to coincide with the release of his newest feature, Bestiaire, a phenomenal, genre-defying portrait of animals shot in eight days over eight months at a Quebec safari park.

To what extent did you refer to traditional bestiaries when coming up with Bestiaire?

It was just a way to explain to my team what I wanted. In the beginning, when you say you want to go in a zoo but don’t have a script, you still need to use some words. So I talked about these books, which were about how not to forget what an animal looked like, because there was no photography at that time, and under each animal there was a moral about life. So I said, “Let’s make it a sort of book, but there won’t be a moral to it.”

Still, it’s impossible to watch the film without having moral reflections.

[Laughs] Yes, that’s true. I wouldn’t say that the film is bigger than what I intended, but it’s certainly surprising to see how much darker it is. I went to that place without any intention of showing someone who is diabolical, or a situation that is shocking, or anything. I just asked myself: what is a zoo? For me, is a zoo a sad place? No. Is it a cruel place? No. It’s an absurd place. You go there and you pay money to look at animals – it’s like an absurd ballet. So I thought, “Let’s make a film that’s going to be a sort of absurd song.” But for a lot of people the film is sad, for a lot of people the film is shocking, for a lot of people it’s a pamphlet against zoos. Of course here and there you can feel the shots are telling you something, but I don’t want to be the one telling you what to think – as a director I’m ready to take all interpretations.

What are some of the more interesting interpretations you’ve received?

A woman at Sundance said, “That film is a horror film, sir. For 70 minutes there’s a sense of menace and I was always feeling that something would happen.” That for me was an amazing compliment, because the sound in the film has been created as a menace somehow. That’s why the film for me is not a documentary; it’s more like fiction, because there’s a desire for fiction. Another woman said, “It’s not a film about animals, it’s a film about an audience watching a film.” [Laughs] I remember the second screening in Berlin was on an Imax screen, so I told my producer, “We need to stay, it’s Imax!” There was a guy in front of us and at some point he stopped watching the film and he started looking at everybody’s face in the cinema, for like two minutes! Maybe he thought, “Oh, it’s so boring, are people sleeping? Are people smiling, are they shocked, what?” But he felt it was time to look at people’s faces. [Laughs] I’m about cinema, and I’m about language, and I’m about viewer expectations, so to me those are all compliments.

You mention sound, which plays such an important role. What were you telling your sound editor?

For me, sound is always very important, to create the off-screen, the hors-champ. With Bestiaire, I told my sound designer, “I want menace. Give me the feeling that something can happen at any time.” He said, “Like, an alien invasion?” I said, “Yeah, why not?” He said, “A zombie attack, something like that?” I said, “Yeah!” He’s been my sound designer for six films now, so we know each other pretty well.

There are a lot of parts in the film that are lying to you, big time. Like when you see the lions and tigers being aggressive in the cages, they’re not at all, they’re so happy to see us! I like to create something myself, I don’t want to abandon myself to reality, so I’m pulling the strings – I’m the puppet master. [Laughs] I would say 60 percent of the sound is totally recreated and I have no problem with that. Some documentary people, they look at me in a weird way when I say that, because for them you should never, never lie about the reality you’re filming. But I’m sorry, I’m a fiction filmmaker and I will always lie about that reality and it’s my pleasure to do so.

This is the second film you’ve made that is in large part a documentary. In Carcasses you blended in a fictional narrative, while here you touch on elements of the art film and film essay. What interests you about this blend?

When I started my first film, Drifting States, I thought reality was sacred and I should just film it without ever pushing it or deranging it. But then, around the Carcasses days, I thought, “We can’t just film that man all day long collecting these cars.” More and more, I have a desire for fiction that I want to use against reality. Reality is not enough for me anymore, so when I go inside a zoo, I don’t feel it’s interesting to make film number 35 about a zoo. You will probably never see me do a full, normal documentary. I like films to look like reality, but they’re not actually possible. Like Curling: everything looks possible in that film, but not really. People who don’t like Curling say, “Well, that’s not possible. This young girl, she finds eight bodies in the snow and she doesn’t tell her father.” [Laughs] Except it is possible, but not really – it’s just a distorted reality. I’m attracted by this ‘one foot outside the world’ relationship with reality.

You didn’t write a script for Bestiaire. How did the planning work?

I knew there would be seasons and that would be the minimal structure of the film. Then, I knew I wanted to film energies between humans and animals. I wasn’t sure how to achieve that, but every time I would meet the zoo employees or other humans, I’d try to make them interact with the animals, lying or not, fiction or not. And I knew that I wanted to show the life of the animals, the death of the animals, the representation and the resurrection. But I made sure not to have too much structure, because in the end it’d look like a thesis film, like I’m trying to prove a point. The film is free for the viewer to associate stuff but at the same time you need to make sure it doesn’t look too random. Some people that don’t like the film say it’s random and there’s nothing. People who love the film too much, they give me so many interpretations, it makes it look super intellectual. I still think it’s a naïve film, for viewers that are ready to be viewers. I feel like today you just sit there and you wait for the solution. This film is not about solutions, it’s about being free enough to look for your own solutions. Those are my favourite type of films.

What are some examples?

Sometimes my favourite films are films in which I think about something else – I’m not even watching the screen anymore, I’m thinking about the next film I’m going to make. Sunrise by Murnau – I’ve watched that film maybe 20 times, but I’ve never really watched it. It starts and I’m travelling around in my head and I think about other films I would do. Or when you watch a Claire Denis film, you know it’s not really about the quality of the narration; it’s about ellipsis and how she’s jumping from one sensation to the next. When I watch Beau Travail, I’m not really into her film, I’m somewhere else and that’s a good sign. Or Apichatpong [Weerasethakul], of course. We don’t say he’s one of the best filmmakers around for nothing. He gives you the liberty to be a viewer again. That Uncle Boonmee film, what is that? We can’t really say what it is, we just know it’s fascinating.

I really like those films where you can’t say, “Oh, it’s a film about this, or that…” I’d prefer for people to say, “You need to see Bestiaire, I don’t know how to explain it, it’s just animals looking at you – you need to see that!” We should find that naïve way of looking at things again. It’s easy now to be cynical when you watch a film, so I just hope Bestiaire is… for kids! Some guy said, “You know that my cat watched your film?” I started laughing and he was like, “Really! My cat stayed there and when there was a human, he would look away, and when it was an animal he would stay inside your film.” That is so stupid to say, but it means something, there is something there – I don’t know how to put it into words, but some people say, “I watched it with my two-year-old and he was completely fascinated.” [Laughs] There’s a desire to go back to something very primitive with that film, I guess.