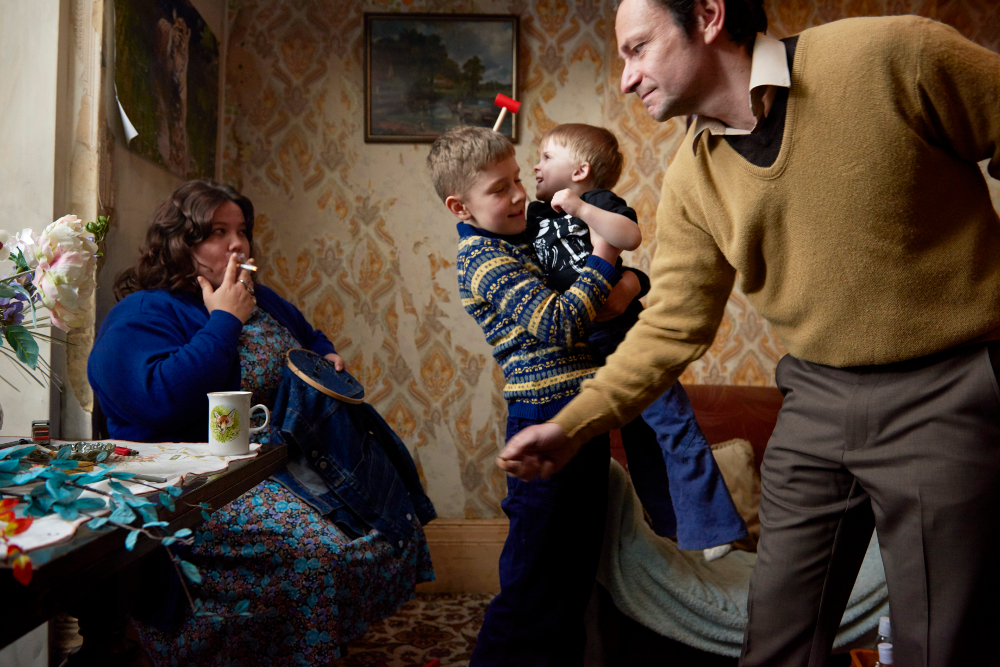 Was cinema always part of your career plan?

I think I always had it in the back of my mind but I never thought I’d get the opportunity. I made a few short films and I thought the transition to a feature would be harder, but it wasn’t. What helped me a lot was looking at the work of (Canadian artist) Jeff Wall and the way he reconstructs things he’s noticed. He sees something that really sticks in his mind and recreates it so beautifully.

When your photo series ‘Ray’s A Laugh’ – on which this film is based – came out, reviews employed the term “squalid realism”. Were you happy with that?

Maybe not. It gives the impression that you’re trying to force something to look more squalid than it is, but that’s really how it was. People are used to seeing things that are not real, and maybe if you make something very real, they think you’ve overdone it. But to answer your question, it does sound negative. Maybe they’re referring to a certain aesthetic. You know when you go into a favela in South America, and you see the way people place objects and the stains and splatters, that’s how it looks. So I wouldn’t call it squalid realism – you need a kinder term.

What was the impetus for making the film?

Why did you choose to shoot in the building you grew up in?

Maybe it was a conceptual thing. I just thought that if things were shot where the events took place, it would be more authentic somehow. It was great and it made it more familiar to me. It really helped to recreate the memories.

Can you tell me about the casting process – was it difficult to cast these roles, because of your proximity to the real-life people?

Yeah, that was hard. Sometimes an actor would do an audition and it felt like the real person had come in the room – the hairs would stand up on the back of my neck. I went with that feeling and picked the actors that seemed to bring the characters back to life.

Physically speaking, it’s quite uncanny, especially when we see that photo of your parents at the end of the film.

The actor that played Liz (Deirdre “White Dee” Kelly) is… It’s like she is my mother, you know? Even when I see her now! (Laughs) When I met White Dee, she was like an open book – a very genuine person.

Did you always have a triptych structure in mind?

Not really. I shot the scenes of my father in his bed first and that was intended to be a gallery film, as a single screen installation. And as I was making that, I wrote a short film about my uncle. I had these two shorts figured out and I thought that if I could write another one, there could be a feature in there somewhere.

Your decision to shoot on 16mm and in Academy ratio lends the film a sense of confinement.

Yes, there is that. Also, the TV when I was growing up was 4:3, and the window my dad looked out of and the rooms I grew up in were roughly that ratio. I did some tests with panoramic images and it just looked weird, especially for the interiors. As for the use of 16mm, I think that if you want to go back in time, it’s best to use the medium of the time.

Your DoP was Daniel Landin, who did the cinematography for Jonathan Glazer’s Under The Skin.

Yes, and Sexy Beast, which is great. Working with him was easy, as we seem to share a similar aesthetic, and he was probably one of the most experienced people on set, so it was great having him there. His team work like clockwork and seeing this little army work and click together was great.

It’s striking how tactile and textured the film feels, and how effective the sound design is. Touches like the crackling sounds of plastic bottles make this such a sensory experience.

I remember the sound of those plastic bottles and it really stuck with me. It was important for me to get those details right. Those textures and sounds get under your skin – those are the things you remember once the film is over. You truly feel them.

Can you talk to me about the choice of music, from Musical Youth to Dusty Springfield?

My producer (Jacqui Davies) did that – she’s about the same age as me, and she chose the music. And to tell you the truth about Musical Youth, I remember hearing ‘Pass the Dutchie’ as a kid and it used to really irritate me. And when my producer told me “You have to have this, they come from the Midlands”, I spent weeks on YouTube trying to find a better song and I just couldn’t find a song that would fit in that specific scene better! (Laughs) So, she was right!

Animals and eyes struck me as recurring motifs.

There were always animals when I was growing up. And my mum would take me to Dudley Zoo, which was a bus ride away. That was really special for me. As for the eyes, I teach my students that when you make a photobook of still images, for example, you have to build up a visual vocabulary. You have similar things that reoccur and resonate – it could be windows, or doors, or eyes. I didn’t overthink it but you’re right, there are eyes everywhere!

The way you deal with memory is also very interesting, especially the smooth transitions from your father’s room to the past.

We spent a lot of time doing those transitions. It’s got a flow, hasn’t it? I wanted people to feel like they were drifting into memories. A lot of the scenes were shot the way I remembered them, not always objectively – and your memories are underpinned by your own thoughts and emotions at the time. I thought that maybe by portraying things as I remember, I could access those thoughts and emotions that underpin the memory.

Social realist films often tip into heavy-handed miserabilism, but that’s not the case here – some moments are quite funny.

It’s from lived experience and there was a lot of humour. If you’re poor or you’ve got a rubbish job, you’ll make jokes with those around you to get you through it. It’s part of the culture. It was important for me to put that in, and I remember some of the terms that were used at home, like “bollock brain!”

That’s one of the best insults I’ve heard in a while!

It’s a great one, isn’t it? But to come to back social realism, I was very aware of clichés and tried to avoid these. I hoped that if everything was reconstructed from memory as far as possible, and I didn’t think about other films, I’d avoid cliché.

Lastly, has the experience on this first film made you want to continue making films?

Am I allowed to ask?

I’d rather get funded first! (Laughs) But I like the idea of having a project that has both film and photography combined.

Liz & Ray opens in Berlin cinemas on May 9. Check our OV search engine for showtimes.