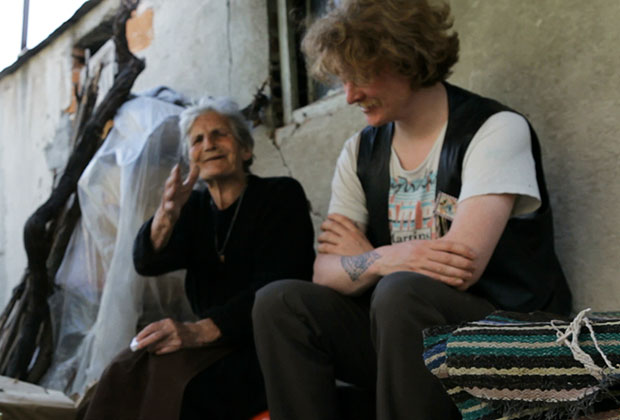 In their documentary-in-progress Roots in the Heart, rocker turned raconteur Jimmy Trash (of the Gunpowder Temple of Heaven) and filmmaker Thanassis Tatavlalis go deep into a Europe largely forgotten by modern culture – or at least smartphones – in pursuit of the scarce, but sacred, word-of-mouth magic.

Join them as they screen clips of the documentary, music they recorded and an evening of interactive ‘showman-shaman-esque’ magic on June 26 at 20:00 at Salon – Zur wilden Renate for Exberliner meets Borderlines.

Jimmy, what is at the heart of ‘Roots in the Heart’?

Rituals that are passed down by oral tradition. So, magic and paganistic rituals and services but nothing new age or anything learnt from a book. I think exactly the thing we’re looking for and the reason I want it to be all oral traditions is because I want to find things that were the same hundreds of years ago and they’re all very strongly archetypal measures that these magics use – sympathetic magic.

Does it have a medicinal aspect?

Yeah… I think that’s a big part of it, I mean that’s why people are seeking this out as well in villages. Other doctors aren’t really present, or trusted or available and it just kind of took that as the strongest form all over, but there will also be a lot of fortune-telling and big rituals for villages for the summer solstice and harvest festivals. But generally health and well-being is the main point of it all.

Where does religion fit in – are they mutually exclusive?

Religion is a big part of it because we find the orthodox religion kind of at some point swallowed these pagan rites under the mask of being orthodox. But they [the traditional healers] always use the Christ icon in the middle of the altar of spells, wherever we are. The best way I can say is that a lot of the witches or people who are using the icon in magic and healing – they believe they are doing Christ’s work and they accept the church but the church doesn’t accept them. So they’re at the ends – somewhat tolerated but definitely not part of it.

But, taking it another step, we found generally that the church was still more accepting of these paganistic rites than any atheists are [Laughs].

What are the circumstances that have allowed for these oral traditions to survive?

Well definitely: exile. The places we’re going are very far away from major cities. The times that we have visited people that are closer to the city, they’re a bit more watered down versions of it. But it hasn’t been too hard, I mean we’ve found a lot of young people – like in Greece we were interviewing girls who were learning from a granny, just a coffee cup reading. Also a lot of ethnology students that learn just because that’s what their degree is but then they start to practise it themselves because, I don’t know, they have to hang out so often with the grandmas. It’s everything from these people play a great role as a psychologist within the communities because they’re also seen as the wise ones, and also for relief from grieving.

Are there a lot of fundamental similarities in the rituals from place to place?

Yeah, you really see a huge link between all of this magic because it’s really the archetypes that you’re playing with because people in the communities all fear the same thing, or you know, like the huge abundance of phallic figures in fertility rites the world over. The stuff is already in our brains before we’re born, I think. All the symbols and effects. And even sounds and colour match up. Going through Serbia we found a lot of similarities between voodoo and what they’re practising there. Also a lot to do with death rites and the importance of dead relatives. But I think things will get very different in the second part of the year when we go to the north of Europe.

Why do you think it is important to preserve these traditions?

For me this project was so not so much about preservation as learning myself. I had this interest in magic and healing and, before I started to get really hardcore with hermetic teachings or Kabbalistic practises, I thought a project like this is sort of like doing the Grundschule. And I was reading a lot of this alchemist, Paracelsus, whose quote we get the title of the movie from ‘Roots in the Heart’. He was taking a similar trip all through the villages of Europe, to find all of their potions, remedies that were used commonly all through different areas so… he’s an inspirational figure for this work. As far as preservation goes – that’s the job of the ethnographer or anthropologist, you know? I’m doing this as a learning experiment and Thanassis is doing this as artistic venture so the preservation – it’s not my work.

Yeah, well if someone changes their mind about anything at all and gets interested then it’s nice to hear. I guess that’s one of the biggest curses of modern society. For me, how I think about this magic stuff is that – it’s not magic. I think what a lot of people do in different ways is just reclaim something that humans forgot that we could do. I feel like humans are losing the things they are capable of – psychically and physically.

I think smart phones are becoming an example of that.

Yeah, exactly. Like when you see all the amazing things that a human being is capable of and all of their energy, like physical energy and mental energy, has been put into a tiny computer screen that has no output on the other side – it’s really heart-breaking for me. It makes me sad from day to day.

Do you consider yourself a Luddite?

Hah. No – I mean, at some point I thought I was [Laughs]. I mean it’s not like I don’t know how to use these things but at some point I start to get really sick of it all. I mean – it’s not to say the internet has been the easiest way that we’ve got a hold of all the people who have helped us – but definitely it’s the main tool that I’m writing to all the universities for help. It would be hypocritical and mostly I’m really aware in all of this not to ever be hypocritical.

Do you feel converted to any of the belief systems so that you’ll be chanting when you’re back in Berlin?

[Laughs] I’m really anti-conversion and anti- following one thing. I think everything joins a giant school of information that should be carefully sifted through and contemplated.

How did you make the transition from musician to researcher?

Thanassis was in Berlin making a great film 3 years ago [The Rise and the Fall and the Rise]. I was acting as one of the main characters in it and we became very good friends. I wasn’t thinking of using him, I just thought ‘Shit, I really want an excuse to delve into this folk culture of magic’ – and last December he said was free again so I immediately asked him. And we started to film in January.

And after it’s completed you start conquering the other continents?

Yeah, that’s the big plan. This is the European version, and we’re collecting a lot more than just magic, we’re also collecting a lot of people who are singing ancient songs and choirs that are singing in forgotten languages. And I’m hoping it’ll have some kind of success and then we plan to do an Arab, Asian and African version of the same thing.