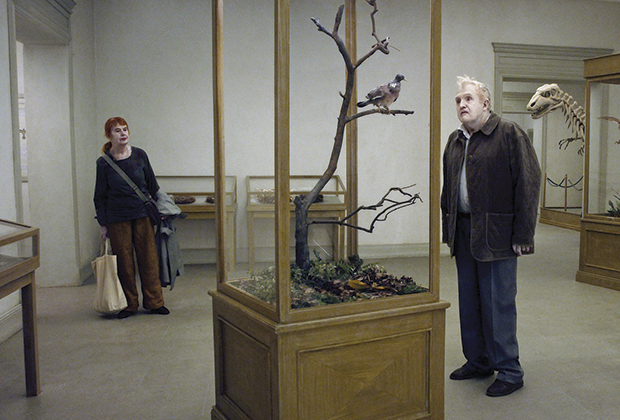 Virtuoso of scurrility and winner of last year’s Venetian Golden Lion, Roy Andersson returns with part III of his The Living trilogy.

A Pigeon Sat on a Branch Reflecting on Existence picks up and deepens the Swedish director’s fascination with the careful orchestration of existential extremities.

Is the title drawn from first-hand observation?

I was sitting one day at the kitchen table writing my script in the south of Sweden. It was one floor up and I saw, on the other side of the window, a tree. And in that tree sat a pigeon. And I felt exactly at the same level. As if it were a friend. And I thought: maybe that pigeon is also fighting with some problems. I was fighting with my script and the pigeon was fighting something else, maybe the problem of finding something to eat. So I think that the pigeon is a projection of myself.

Your films are usually tragi-comic, but both tragedy and comedy are more pronounced than ever in this film. A reflection of our times?

Yes. It’s things that we’ve gotten used to living with. The torture scene with the cylinder? It’s memory and it’s fantasy. But it’s not only fantasy. For me, it’s a kind of historic guilt, collective guilt. I was not there to torture the Indians with the conquistadors, but I feel guilt for the white man. I’m ashamed of being a member of mankind. I was occupied by that up to the moment when I read the Jewish moral philosopher Martin Buber, who wrote about guilt. If you do something cruel against others, you’re committing a crime against existence. How do we get rid of that guilt? You can repair it in another time in another place by being good, by behaving well.

This film incorporates episodes from the past, going as far back as 1709. Why such extreme chronological contrasts?

I really wanted to show the potential of cinematographic language. How far back can we go with that? The idea with the cylindrical torture machine is based on the cruelty of the Assyrians around 500 BCE. That human beings are able to create such things: it was time to show that.

And the comic scenes: are they intended to reflect well on humanity?

I think it’s generosity: it’s human beings longing for love, for contact, for amusement. And it’s beautiful. The scene with limping Lotta kissing the young soldiers is also very sensual. And the song I used in it – we sang it as children. It’s very common in Sweden.

Why do so many of your scenes involve open doors, windows, corridors?

Behind that is the thought that we’re never isolated. We are dependent on society. I don’t like closed doors. I want to see more. What’s going on through the open door? Are there other people with problems out there? I like that very much. The door is a metaphor for this dependence.

What is your fascination with the military?

I always want to irritate, and my hate objects are the aristocracy and the upper classes. I come from the working classes. That’s why I’m so angry with the aristocracy. And when military service is obligatory, it can also be misused. You’re in the hands of people who can abuse you and the system. It happens often. And I really hate it.

You’ve mentioned a fascination with German expressionism. Where’s the connection to your films?

A Pigeon Sat on a Branch Reflecting on Existence opens in Berlin cinemas on January 1. Check our OV search engine for showtimes.