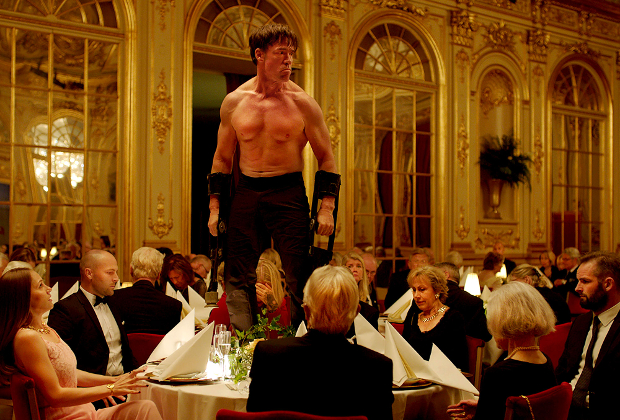 The film, about a museum curator (Claes Bang) whose personal and professional lives begin to unravel after he’s mugged, is both a playful satire of the Stockholm art scene and a sincere meditation on social responsibility. It hits German screens on October 19.

The view of the art world in The Square seems conflicted. Does that reflect your own feelings?

My impression is that the scene is its own world, a bit disconnected from what’s going on outside the walls of museums. It chimes with my own experience of the film world, like the decadence you see in Cannes. For me it was important to attack this a little. Today, there’s so much theory used to justify the art that’s being made. And if you scratch away at the surface, you often see that the emperor is naked, that the artist doesn’t actually have that much to say.

The film also seems unsure whether art can change people for the better.

I definitely think you can use art to educate people. The Square started out as a real art piece that a friend and I exhibited in a museum in Sweden. We wanted to create a symbolic place where we are reminded of our common responsibilities, something like a pedestrian crossing – lines in the street denoting an agreement that cars should be careful with pedestrians. Our square created a small movement. A group of disabled people demonstrated there when they had benefits taken away from them. Others used it as a space to protest violence after a terrorist attack. But I think this sort of thing is sometimes missing from today’s art world. Back when Marcel Duchamp put a urinal in a gallery, it was a genuine provocation that really got people discussing the purpose of the space. Nowadays, that kind of object is put into a room, and it doesn’t raise any real questions.

Why did you choose to explore the world from the perspective of a curator?

To be a curator you need to manoeuvre yourself in a very socially skillful way. How do you get money? How do you ensure that you’re controversial enough, but not too controversial? In a publicly funded museum, you also have this sense instilled in you that this is something important for society. A curator has so many factors to consider when making decisions, so I thought this was an interesting perspective.

Your films deal with the tension between what people want to say and do versus what they feel they should say and do.

Recently I experienced one of these situations myself. One of the parents at my kids’ school had a small role in The Square. I saw him after we won the Palme d’Or and he was so happy, but I’d forgotten to tell him he’d been cut out of the film! As he walked away I imagined him finding out when he finally saw it, and wondering why the hell I hadn’t said anything. In the end I was very rational and told him. He was disappointed, of course, but now I no longer have to deal with the guilt! What I like about a situation like this is that it’s easy to identify the wrong choice. A lot of scenes in my films are based around a dilemma where you have two or more choices, but none of them are easy.

Pedro Almodóvar said this was a film about the “dictatorship of being politically correct”. Do you agree?

I don’t have any problem with political correctness, it’s an essential part of the march towards equality. But I will say that with my previous films, people have sometimes been provoked on an emotional level, having not really reflected on what they’ve seen. And that’s perhaps the downside of political correctness. The reaction becomes very emotional and un-intellectual. In some ways a consensus forms around how you’re meant to discuss or depict certain groups of people, and I think that can inhibit meaningful debate.