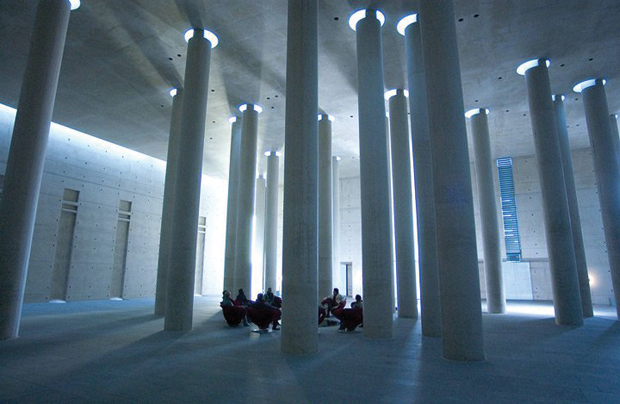 Dan Borden on Berlin’s most dramatic architecture, as seen in a Charlize Theron flop.

There’s a big drama unfolding on a little empty lot next to Alexanderplatz: will it be the site of a new 150-metre skyscraper? And what will it look like? Local architects Agnieszka Preibisz and Peter Sandhaus unveiled their own dramatic proposal, a twisted glass cucumber filled with gardens-in-the-sky. They admit it’s not a serious scheme, more of a warning shot. Why, they ask, are Berlin’s new buildings so boring, so bland, so… beige?

It’s true – empty lots across the city are morphing into acres of blocky clones covered in sandstone and travertine. What happened to the city that used to inspire radical ideas and utopian schemes? Where’s the drama?

It was only 10 years ago that Berlin was still the city of the future – at least for Hollywood. In September 2004, Charlize Theron arrived here to play the title role in the sci-fi adventure Æon Flux against a backdrop of the city’s most dramatic architecture. The film, based on Peter Chung’s animated series was a flop, but today it’s a scrapbook of buildings that embody the excitement, vision and aspirations of the city’s past that have all but vanished from the Berlin of 2014.

This little gem by architect Carl Gotthard Langhans – he also designed the Brandenburg Gate – is Berlin’s best example of 18th-century neoclassicism. In the film, it’s Æon Flux’s 25th-century brain. She’s a super-powered rebel bent on overthrowing the evil dictator of the dystopian metropolis Bregna. Her boss communicates with her via drug-induced hallucinations which take place on this theatre’s circular stage. Originally, horse carcasses were raised up into the space via an elevated platform, then dissected as Prussian veterinary students watched from the rows of seating around it. Langhans based his design on Roman and Renaissance buildings, tying it to an idealised past and announcing a new golden age of Prussian enlightenment.

This building is affectionately known as the “pregnant oyster” for its distinctive curved thin-shell roof. In the film, Æon clambers to the building‘s concrete peak while battling blackclad guards and manages to blow up the evil regime’s surveillance system. Its futuristic design by American Hugh Stubbins was no mistake – the US government sponsored the building as a provocative display of cutting-edge Western design within sight of East Berlin. The East Germans took notice – they constructed an almost-identical building known as the “Teepott” near Rostock 10 years later.

No period in Berlin’s history inspired more visionary schemes than its triumphant return to the role of capital of reunified Germany. In 1993, architects Axel Schultes and Charlotte Frank won the prestigious competition for the new government zone with a clever master plan that crosses an arc in the Spree River twice, literally stitching together East and West. Five years later, they built their masterpiece, the Baumschulenweg Crematorium in southeast Berlin (photo). Mourners gather in a central hall of Zen-like simplicity: naked concrete walls and a ceiling supported by thin, randomly placed columns that suggest trees in a forest. Æon Flux’s set designers converted the space to an executive boardroom where conspirators plot a coup.

Okay, a crematorium deserves dramatic architecture, but an animal shelter? Berlin’s Tierheim, home to 1400 homeless pets, looks like a sci-fi film set: a series of round pod-like courtyards, each surrounded by smaller pods housing furry inmates. The sleek concrete and glass complex with ponds, fountains and gardens proved ideal for several Æon Flux sequences including the climactic gun battle.

Is architect Dietrich Bangert’s edgy design wasted on puppies, kittens and hamsters? Or should every building be smart and dramatic, function be damned?

The lack of inspiring buildings since Bangert’s Tierheim suggests that Berliners, after the roller coaster ride that was the 20th century, are content with beige normalcy in the 21st. But young architects like Preibisz and Sandhaus are fighting for something new. Hundreds of millions of euros flowing into the city’s tech industry are already transforming the economy – will they reshape the skyline? Is Berlin ready for a new era of architectural drama? That new tower on Alexanderplatz could set the stage.