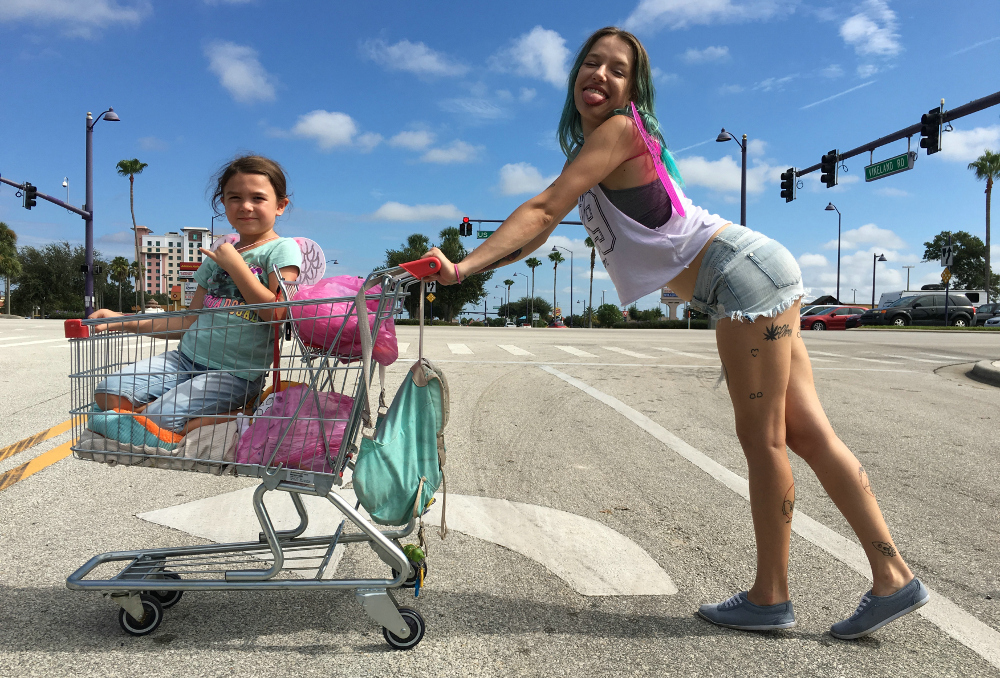 Sean Baker’s The Florida Project, one of the past year’s finest films, finally hits German screens on March 16.

Writer-director Sean Baker’s micro-budget tales of marginalised Americans have been charming critics and festival audiences for the best part of two decades. But it was 2015’s Tangerine, a blistering tale of trans sex workers shot on an iPhone, that proved his major breakthrough. The Florida Project is a more than worthy follow-up. It’s an exuberant, deeply empathetic portrait of impoverished individuals living hand-to-mouth in cheap motels on the outskirts of Walt Disney World in Florida, inspired by real-life accounts. Taking centre stage are precocious six-year-old Moonee (Brooklynn Prince), her well-meaning but irresponsible young mother Halley (Bria Vinaite), and their paternal motel manager Bobby (Willem Dafoe). We caught up with Baker to learn more about the making of this modest masterpiece.

How did you elicit such naturalistic performances from your child actors?

We spent a lot of time casting. We were looking for kids from this area who didn’t feel “Hollywood” but who had an innate acting ability, so it was quite a challenge. But we found them, and I also had a wonderful acting coach named Samantha Quan. She turned the whole process into a kind summer camp for them. The second that children of that age get bored or distracted, they’ll shut down, so we were constantly working to keep them in the moment. For the most part the film was quite tightly scripted. The kids had to learn their lines, because they needed a solid foundation. But when we were on set I’d ask them to loosen it up a bit and improvise. All four of them were extroverts to a degree, so they never got embarrassed, and I never had to force anything out of them.

The film broaches some dark territory. How did you explain this to the children?

Brooklynn is quite a prodigy really. She’s actually from a middle-class area outside Orlando, but even at six years old, she was truly able to empathise with the situation of these characters living in poverty. But we didn’t expose them to the more adult themes – it’s built into the story that Halley is shielding Moonee from the harsher aspects of their existence. The only thing we had to expose them to was profanity. But I learned during production that they already knew a lot more than we thought they did. We’d ask them to improvise and some stuff came out of their mouths that really took me by surprise!

Willem Dafoe blends into this world seamlessly, but were you worried about bringing a big star into the mix?

Yes of course. But at the same time, my financiers were putting up a few million dollars to make the film, so in order to break even it needed a recognisable face. For Bobby, I was willing to be flexible and look at actors aged 35 to 60, because the motel managers we met fell into that age range. But as soon as Willem was mentioned, I knew he’d be perfect. I think he was concerned about blending in with these first-timers and unrecognisable faces. But he basically became Bobby as soon as the cameras started rolling.

How was it filming The Florida Project on 35mm, compared to the experience of shooting Tangerine on iPhones?

The big difference was that this was a full union shoot. Tangerine was so microbudget, all I needed was an assistant director. So things were obviously way looser – I was able to stop what we were doing if ever I had a new idea for a different scene that I wanted to try out. You can’t do that with a crew of 40, because every department will be affected by that decision. The more money you have, the harder it is to keep the improvisation going on behind the camera. That’s a problem for me because I like to be able to switch focus. Here, people I was working with for the first time thought I was crazy, because it’s really not accepted practice to just abandon the schedule! But we all got on the same page eventually.

It’s hard to believe that Bria Vinaite, who plays Halley, had never really acted before.

Initially I’d planned to cast a Hollywood actress, but then I found Bria on Instagram, and something was telling me that we needed a fresh face for this character. I felt we could get away with someone famous playing Bobby, because he serves as a kind of anchor for the audience. But with this impoverished young mom who’s turning to sex work, I figured that if you see a celebrity in this role, it might be harder to buy into. When I reached out to Bria, I could tell immediately that she felt that this was her big break, and she was going to make it work no matter what. So she worked like crazy with our acting coach, who basically crammed four years of acting training into a month. It was amazing to see her get to the point where she could hold her own with Willem.

She posts a lot of videos as well as photos, and she had many characteristics that made me think of Halley. She’s a pot advocate and she’s holding a blunt in every other picture, so I got this sense that she was a little rebellious, which is one of Halley’s defining traits! And she was putting herself out there in this performative way, so I figured that confidence wouldn’t be a problem. But I almost certainly wouldn’t have been able to convince my financers, had I not had a proven track-record with inexperienced actors. The fact that my first-time actresses in Tangerine had won awards definitely made it easier to convince everyone to give Bria a shot.

The film is clearly rooted in reality, but how thorough was your research?

We tried writing a treatment based just on news articles, but something was definitely missing. Then we went away and made Tangerine, and the success of that opened doors for us. We got a grant to allow us to spend time Florida. We took three major trips, staying for about two weeks at a time. Every day, we’d go out to a different motel and set up interviews, or sometimes just explore the grounds until we got kicked off. A lot of the motels were closed off to the idea because they’ve been burned by the media in the past, by being used as examples as the worst thing that could happen. The residents, on the other hand, were often very open about their lives, because they feel hidden. They were grateful that we wanted to tell their story.

Do you feel the US authorities are doing enough to support the real-life Halleys and Moonees?

When I first started reading the articles my co-writer Chris Bergoch was sending me, I thought he had a finger-pointing, anti-corporation movie in mind. But it’s a lot more complex than that. Certainly, there’s an affordable housing crisis in the US, and the federal government isn’t doing enough to tackle that. But at a state and local level, nobody wants homeless families. People are trying to work together, but their means are very limited. A lot of this support is coming from philanthropists and faith-based non-profits, but Disney actually donated $500,000 last year to the local Homeless Impact Fund. So people do care, but we don’t have the right infrastructure, and it’s getting worse and worse. Among the families themselves, there’s a real sense of despair, because living like this becomes a trap. If you’ve reached the stage where you can’t secure permanent housing for whatever reason, you’re most likely either on welfare or you have a minimum wage job. But a motel room costs $40 a night – you’re basically spending $1100 a month on rent, which is what I pay in West Hollywood! So they have no ability save. It’s a very hard cycle to break out of.

The Florida Projects opens in Berlin cinemas on March 15. Check our OV search engine for showtimes.