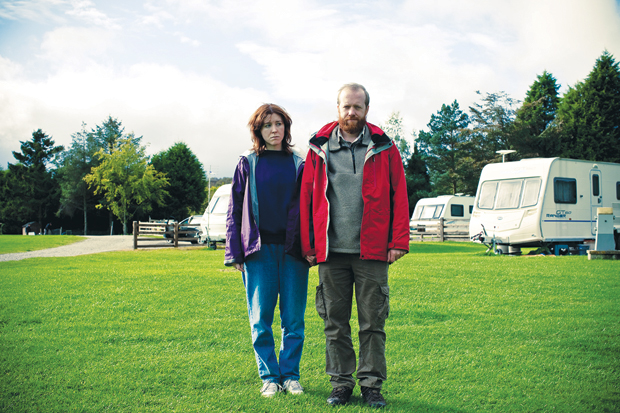 A humdrum road trip in the English countryside turns into a killing spree in Ben Wheatley’s neo-noir comedy Sightseers, written by and co-starring Alice Lowe and Steve Oram.

The British actors, comedians and writers (photo) made a name for themselves independently at the Edinburgh Fringe before working together on London sketch show Ealing Live!. Both have had work screened at Cannes. Sightseers, co-written by Amy Jump and helmed by cult director Ben Wheatley, is their first feature film cooperation.

STEVE ORAM: There is nothing funny about killing people really.

AL: But hopefully the characters are funny. They do something that is very wrong and immoral. That’s a kind of fantasy. If we didn’t have morals and we just acted on our impulses, we would commit acts of violence towards people that we didn’t like. These characters fulfil these fantasies.

How important is their back story?

AL: We did a lot of research on serial killer psychology. We knew that the characters had to have a sort of logic.

The film could almost work without the murders

SO: If we treated it lightly and flippantly, then it wouldn’t be funny. The idea is that Chris is a loner who’s probably killed a couple of people in the past and got away with it, and now he’s at a stage where he wants to move the game onwards. He hooks up with his new girlfriend…

AL: …thinks he’s found a sort of nice malleable woman who he can train up to be his assistant, but unfortunately…

Ben Wheatley’s first two films are about professional killers. Why go with amateurs?

SO: I love Tarantino, but I think we wanted to do the sort of British take on that. Our serial killers aren’t cool at all. They’re nervous and you’re not expecting them to go where they go. That’s the satisfaction. We wanted to make them the least glamorous killers you could imagine. They’re from the Midlands, really plain-looking, they have a caravan, they have boring hobbies like knitting. It was a way of capturing what makes us laugh about being English as well.

AL: It’s really hard to escape those influences you’ve grown up with. We’re both from the Midlands. When you’re from somewhere regional you take on a specific sense of humour: a way of thinking about life. It’s that self-deprecating thing. We wanted the characters to be a bit like that ‘cos you don’t see it much.

Was the film fully scripted?

AL: We had a very solid script but we use improvisation to write. Some scenes, especially some of the more expositional ones, are word for word. Some scenes are completely improvised. That’s the way Ben likes to work. I think if you’re making comedy and you’re not using improvisation – I don’t know why you wouldn’t. It’s the way to get those golden moments. If it fails, it doesn’t matter. It’s just a tiny bit of wasted film and these days that’s cheap.

Did you ever feel the script wasn’t working and decide to change something?

There is nothing funny about killing people really.

AL: There were actually more killings in the original script. The film is really the journey of their relationship; the murders are just a reflection of what’s happening between them. The film could almost work without the murders. It’s just their hobby. If they were llama breeders or something, they’d actually be quite successful.

It’s about the act of murder, rather than reflecting on murder?

SO: Yeah. It’s about a feeling, and it’s a secret thing that they do together: it’s very strongly linked to sex.

It’s not just comedy, or social satire. Towards the end, there’s a tipping point where it turns tragic.

AL: We definitely wanted to do that. There was that tipping point, when we were writing. We thought: do we want this to be just a comedy and play it for laughs? Or do we want people to maybe go away thinking? That’s the difference between tragedy and comedy: how many people are left alive on the stage. And we said, let’s do the more difficult thing, in a way.