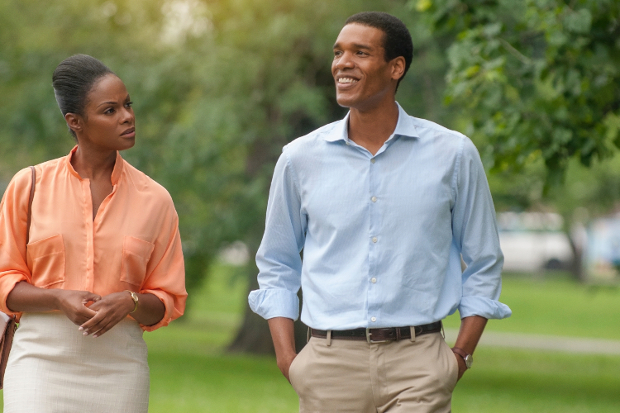 A low-budget, fictionalised account of the Obamas’ chaste first date might sound like a made-for-TV nightmare, but Richard Tanne’s directorial debut is in fact an impressive slice of lo-fi heightened realism, bolstered by nuanced performances from Parker Sawyers and Tika Sumpter as the young future President and First Lady.

Of all the stories that could be told about the Obamas, why this one?

The idea came about in 2007, when they were really rising to national prominence. I was taken by both of them – the way that they look at each other, the way they flirt with each other. Their love seemed to be very deep and authentic, and a little sexy and fun. I certainly wasn’t looking to make the Obama biopic, but when I read about their first date I realised it had the making of a movie – it’s this epic, day-long encounter that takes place all over Chicago. And it had dramatic trappings built into it, because Michelle wasn’t interested at first, and Barack had just the one day to win her over.

How much research did you do, and how much creative license did you take?

I’ve been reading books about them since 2008. There’s a lot of established facts out there, but not a lot of meat on the bone in terms of what they talked about that day, and how he won her over. That was where the creative license came in. But I tried to gather as many facts about their lives as possible, and use these to build a sense of who they might have been at that time. In terms of the film’s narrative, the one major creative detour was the sequence in which they attend the community meeting. They did go to a community meeting at some point in their early courtship, but it just worked dramatically to imagine it as part of their first date.

One of my favourite scenes comes after this sequence, when Michelle takes Barack to task for contriving a situation that makes him look like a saint. It allows for a slightly more cynical reading, in that here’s this smooth-talking, arrogant guy just trying to get laid.

I’m glad you read it that way! I haven’t heard anyone read it as a purely cynical move, but I’m happy that sort of interpretation exists. For me it was less that he was taking her there to get laid, and more to show her who he is. I remember taking my girlfriend on an early date to a comic book shop, because I wanted her to know that I’m a geek! Once I saw that she understood that side of me, it was sort of a win. It’s different in the film because he is obviously showing off here, but I think it’s ultimately about him wanting to show her who he was.

In terms of the filmmaking style, the first thing that springs to mind is Richard Linklater’s Before Sunrise. Was that an influence, and who else were you inspired by?

I love Linklater, his whole body of work. But when I started watching his movies, they were a gateway drug to Eric Rohmer. So you have to throw films like My Night at Maude’s or Summer into the conversation – he really invented the walk and talk. And then because our film’s set in 1989 and we had a very limited budget to realise the period on a big scale, I wanted to shoot it like something that could’ve existed back then. The quality of the lensing is inspired by Adrian Lyne movies from that time, like Flashdance and Fatal Attraction. Another movie that has a kind of heightened naturalism is Do the Right Thing, which plays an important role in the plot of our film, and which also takes place over the course of one day in the summertime.

Your leads are totally convincing as the Obamas, yet it never feels like they’re delivering impersonations. Was it hard to strike this balance?

The first audition tape Parker sent was a very skilful impersonation of the President – it could’ve been on Saturday Night Live. So I asked him to just imagine himself as a regular guy trying to get a girl to come out for a cup of coffee. He totally got it – when the next tape came in, I got really emotional, because I knew in that moment that I’d found the guy that was going to make this whole thing work.

When it came to shooting, I definitely took a cue from Linklater. We rehearsed until they were completely off-book, so that they could do multiple takes, and we could get performances that felt fully-fleshed and effortless. The note I would give here and there was “pull back, drop the First Lady, drop the President, bring more of yourself to it”. They’d done a lot of homework, and my thinking was that if we stamped out anything that felt like caricature, their research would bubble back up to the surface in more organic ways.

I read that the Obamas were aware of the film, but as of the world premiere, they hadn’t seen it. Do you have any update on this?

I wish I did! It’s funny, we were doing press in Washington DC last week, and Parker and I went to dinner, and midway through the meal there was all this commotion, and people rushing outside to the restaurant next door. We paid up and walked over to see what was going on, and Barack and Michelle were having dinner there for his birthday. So that was our closest brush with them! But John Legend is an executive producer, he’s worked with them, and we know that they’re aware of it through him. I don’t know when they’re going to see it, but I hope they get a kick out of it!

Given the current American political climate, it feels especially poignant seeing these young idealists at the outset of their careers. Did you set out to make a political statement?

For me it really was all about the human drama, but I like that people are considering it from a political perspective. I was partly compelled to do it this way because I knew that each individual would come to the movie with their own relationship to the politics of the administration, with their own relationship to the First Couple, with their own personal politics on that particular day. And all of that’s going to shade somebody’s point of view, for better or for worse. That gave telling the story a little extra spice for me – movies are always subjective, but here there’s this extra layer of subjectivity. We know what happens to them, but they don’t, and we have opinions about what they will go on to do, but the movie doesn’t.

The film’s Sundance premiere took place while the #OscarsSoWhite controversy was at its height. Do you think that affected the way your film was perceived and appraised?

You know, I have no idea if that kind of thing affects the reviews. I hope that’s not the case – I hope that people are judging it purely as a piece of cinema. But it was really cool being part of the diversity conversation at Sundance, along with films like The Birth of a Nation and Sleight. It was a nice big melting point this year, right around the time of that controversy, and it was kind of a breath of fresh air, to have a group of movies that were being made outside the studio system, and proving that there is a voice for people of colour.

How do you feel about the film being renamed My First Lady for its German release?

Well what I would say is that I wouldn’t choose that title for America! But they consulted me about it, and my thinking is, the German distributor knows better than me what’s going to carry over there. So far be it from me to try to impose my will. If it makes sense over there, and gets more butts in theatres, that’s ultimately all that matters. And Southside With You is very region-specific, so I get it!

Southside With You (My First Lady) opens in Berlin cinemas on September 15. Check our OV search engine for showtimes.