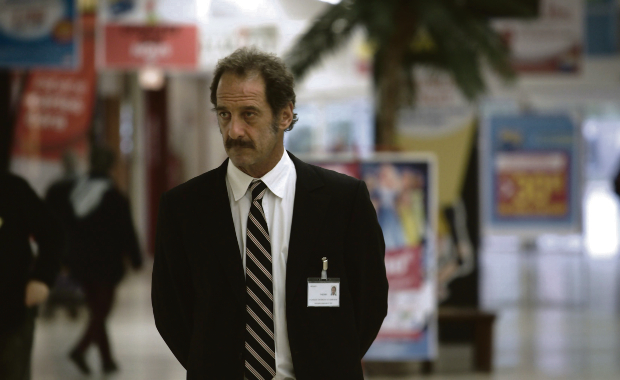 The film has already garnered praise from French and international audiences and critics; Lindon won Best Actor at last year’s Cannes festival for his portrayal of a recently unemployed man forced to compromise in order to make ends meet.

The original French translates as “market law”. In English, it’s The Measure of a Man and in German it’s Der Wert des Menschen, “the value of people”… What do you think of the translations of the film’s title?

STÉPHANE BRIZÉ: I’m quite angry about that, because titles are vital. I was told that “market law” referred too much to the financial world, and that it didn’t work. Fine, but I insisted that my title allude to a certain law of the jungle, that it invoke the survival of the fittest. There was an English title I liked, Dogs Eat Dogs, but they went against it and I was told it would be The Measure of a Man. It does work to the extent that there’s a man at his wits’ end, but then other countries translate it from the English and not from the original French title. It lessens the impact.

VINCENT LINDON: And why didn’t we simply say, “No, we’re not happy with that title”?

SB: Because the powers that be constantly affirm that they know best and understand what will attract audiences. I profoundly believe that they don’t know best, and that people are scared of a violent title. I think that part of what made the film so popular in France was the radical nature of the title: La Loi du Marché has an impact, a chilling strength.

Where did the inspiration for the film come from?

SB: Every day, I wake up, I listen to the radio, I read the newspapers and I’m fed the same thing that everyone else is: the brutality that surrounds us on the most intimate of levels. We’re bombarded with numbers when it comes to unemployment in France and I asked myself: how can a man react, faced with the reality of these numbers?

Vincent, you’ve previously said that the main protagonist of the film, Thierry, is the character you’re the proudest to have portrayed. Why is that?

VL: Yes, I stand by that. I’m always asked how I prepared for a role like this one, if I did research on the current job market, and my answer is always that that’s not how I work. When I am off ered a role, there’s a deal that is struck between the actor and the character: the character becomes me as much as I become him.

VL: Well, I need to be interested by a character and when the shoot is over, there needs to be, no matter how distant, some radiation within me of what the character has done. Thierry was by far the character who radiated the most. To put it another way, if I, Vincent Lindon, was invited to share a meal with any of the characters I’ve played in the past, I’d want it to be Thierry. He intrigues me the most and even if I’ve been passionate about other roles, Thierry’s the one that I feel won’t leave me completely.

SB: Also, of the many characters you’ve played for me, he’s the one who clearly answers a question that society asks him. His answer is powerful and reassuring, and you want to live up to this man’s example.

The film often seems hyper-realist, to the point of being a documentary…

SB: Vincent was on set for 20 days and we shot the whole film in 21 days. I didn’t want to wait for make-up and light set-ups, we shot with natural light and had a small crew on set, so yes, the stripped down, realistic feel might partly be a consequence of the short shoot. For me, it was a subconscious response to how films are made today: I wanted to make the film feel as real as possible, and a self-imposed reduced shoot was very liberating.

A striking element of the film is how naturally the dialogue flows. How much was improvised?

SB: The screenplay was written, but I have very little ego when it comes to dialogue. Once I’ve written the script, the structure is given and actors will often know more about the characters than I do.

VL: I’m genuinely asking at this point: that line, “You don’t just do anything you want with people,” was that me or you?

VL: Well, you see, I had already said the things Stéphane asked me to say, but that was a mix of me and Thierry.

SB: Not many actors can do it and be that precise, but Vincent always questions the moment and seeks to be in every moment. So, yes, there are moments in the fi lm that are improvised on the spot, but I am wary of that word because most people when they hear ‘improvised’ think there’s a lack of structure. The reality is that there is a frame and within that frame, it’s the actor’s job to inhabit their character.

This is your third film together, after 2009’s Mademoiselle Chambon and 2012’s Quelques heures de Printemps. It seems all three protagonists have a social conscience… is that important for you two, as a director and actor?

VL: Everyone should be at least a little engaged and yes, these films, including The Measure of a Man, deal with important themes. Cinema should reflect society, and my political act here is playing this character, a decent man whom many should aspire to, in a sadly topical film.

SB: Obviously the topic of this film is political, but my approach as a director was committed as well: we hired non-professional actors, we had a small budget and we didn’t profit from the system. Everyone, from technicians to the extras, was paid in full, but Vincent and I only made money once the film did. That, to me, makes sense: it’s a healthy approach.

Stéphane, was it your intention to make The Measure of a Man a political film?

SB: It’s wonderful to have such an impact and to raise awareness, but no film makes a real change. Certain films, at best, can change a law. For instance, Rachid Bouchareb’s Indigènes (Days Of Glory) led to the French government changing a law so that foreign soldiers who fought in the army could get pensions. Here, there’s no single law that can be changed. Unemployment is a generalised cancer. Yes, art and cinema can get people talking, but the tragedy is that if it takes a film for people to start thinking and creating a debate, then that’s a sign something’s inherently very wrong in today’s world. Regardless of the buzz the film may have created, I just wanted to give a face to a number, to remind people that these figures aren’t anonymous.

The Measure of a Man opens in German cinemas on March 17. Check our OV search engine for showtimes.