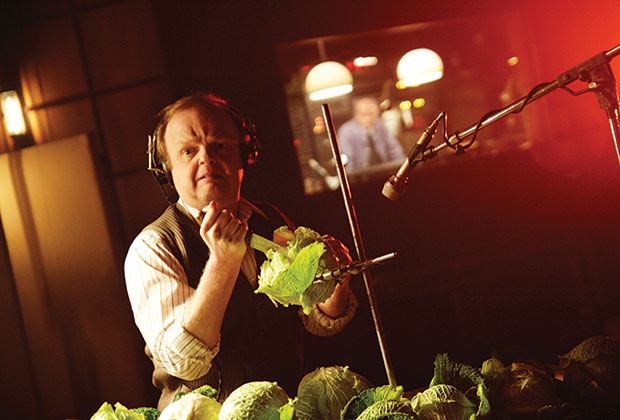 “The gore and the sadism is only one aspect – if you don’t have the suspense, the atmosphere, personally I’m not so interested,” says Strickland, a sharp and affable sort well-versed in the world of gothic horrors, a love affair which was sparked by attending a two month retrospective of Giallo horror originator Mario Bava in London’s National Film Theatre. “It’s the poetry of it, the atmosphere. They were just so ethereal and strange. The way they were lit, the costumes, the hair and of course the soundtracks which were such a strong counterpoint. They were always so beautiful and yearning.”

While these more classic influences are apparent in Strickland’s work, the dread which his films evoke comes from something more modern and ambiguous. “The two films I’ve made, they use genre as a starting point but I wanted to go down my own path. I wanted to eliminate things. In Katalin Varga, take the rape away. In Berberian, take the horror away but still follow the dynamics of a horror. It might not be as scary as a horror, as grotesque, but you still have that intensity. If you couple that with some ominous music, the dread just comes naturally from there.”

These ominous sounds are largely provided by Birmingham band Broadcast, in what would be their last full length album before the tragic death of frontwoman Trish Keenan. Strickland got the group to soundtrack the film within the film, the wonderfully titled Equestrian Vortex, a film we hear but never see. “I was a fan since 1996, I used to collect these Stereolab, duophonic 45s and 12” records. They put out Broadcast’s second and third singles and I loved them. I just thought they were really unique and they referenced a lot of that stuff. In a way I got into it [Giallo and horror soundtracks] through Broadcast – they were talking about the Italian stuff and also the British stuff like [composer] Basil Kirchin, who was what we know as a Garden Shed Eccentric.”

Toby Jones plays Gilderoy in the film – who himself is a bit of a garden shed eccentric and loosely based on Kirchin, among others. Gilderoy is a timid fellow and in a lesser actor’s hands he could have disappeared amidst all those fiery Mediterranean types, but Jones is becoming somewhat of a master of this particular craft. “What was really hard to convey to him was how to maintain that stillness while engaging the audience. As a director it’s very difficult to do that and you trust the actors to find that in themselves, to bring that up. That was a very tough role to talk about with him, the spectrum was so narrow. It was a general long conversation we had, about that type of person.”

Another great presence in Strickland’s film is the stacks of analogue equipment which make up the sound studio. Modulators flicker, dust falls through projector light, celluloid cracks and burns – it’s all very seductive. “People say it’s all obsolete but it’s not – it’s all part of this analogue iconography” – Strickland then points to the sound recording app I’m using to record this interview, a screen complete with an image of an old style mic and its own faux flickering dial  – “it’s the same fetishizing thing. I wanted to make a tactile film about sound, sound that you can physically touch. You can slash it with a razorblade; you can loop it around the room.”

“There’s this performance aspect to sound which you don’t have now – I couldn’t make Berberian set in 2012 with a bunch of plug-ins. You could fit that whole room on an iPhone. But there’s a magic to seeing someone get up on a ladder to turn some dials and oscillators. I’m not trying to romanticise it and say it was better – as with anything it’s all pros and cons. There were better things and there were worse things; I worked on analogue back in the 1990s so I can certainly attest to that.”

Strickland shot his first film on super 16mm but despite a greater budget – and considering the irony of Berberian’s love for analogue – he decided to switch to digital. “It was largely a financial decision. The production design was a huge thing; we had to build a studio within a studio. It seems perverse to shoot a film about analogue on digital, but we thought: let’s embrace that perversity. Argento was always using the latest technology. But to speak quite brutally I was told I would have been fired.”

The worlds of Strickland’s films are certainly hostile places, consistent with a recent trend in British cinema. As with Shane Meadows’ Dead Man’s Shoes, or Ben Wheatley’s Kill List, there is a current taste for these foreboding spheres. “My next one will be a bit lighter – I could do with a bit of lightness.” A historic piece set in Russia – again not shot in Strickland’s native tongue – before the First World War is on the cards, which Wheatley himself will be producing. Light indeed.