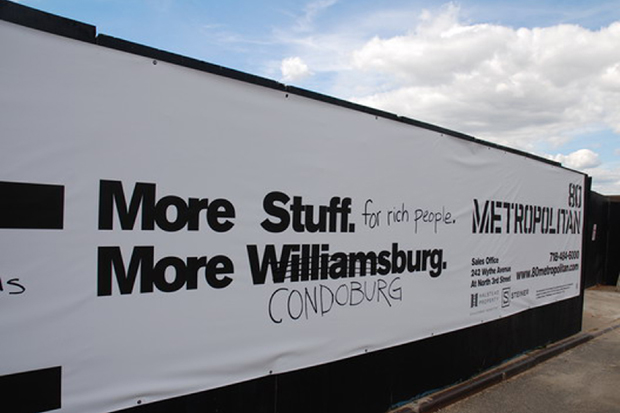 American filmmaker Su Friedrich’s documentary Gut Renovation (2012) is the result of five years’ worth of footage from the eye of gentrification’s hurricane: Williamsburg, Brooklyn. Seething with (ultimately futile) rage, her film is a case study in class differences – and, just maybe, a glimpse into the future of Berlin.

Many other New York neighbourhoods have become gentrified, but none of them so rapidly. What was different with Williamsburg?

There was a plan developed by the city to change Williamsburg. Elsewhere it happened more organically: artists moved out, the industry moved in, so it was a much longer and slower process because there was no plan for it. In Williamsburg, they were already considering doing what they ended up doing back in the early 1990s. In the succeeding years there was an effort by the local community to develop an alternative plan. The result was a huge document with all sorts of ideas about how they could change things in a more reasonable way, but the city didn’t pay any attention; they went along with their own plan. When rezoning was announced in 2005, it basically allowed everything to happen the way it happened. The city set time limits and gave huge tax brakes to the developers. The financial benefit was a great incentive for them to move as fast as they can.

Your documentary is very personal. Was this your strategy from the very beginning?

It was a combination of recognising that it was a personal story entwined with a much larger-scale story. In my case, because I had lived there since 1999, I witnessed things as they changed. I knew that our building was threatened by the rezoning because it was a commercial building. The minute the rezoning came out I thought to myself, “That’s it. We are finished.” So I had a personal stake in what was happening, but I also knew so many people in the neighbourhood and not just artists, a lot of regular people who worked jobs, who owned small shops and businesses. I had lots of conversations with them and they all felt the way I felt, they all saw the rezoning as the end of their businesses. I wanted to make it so that you saw my story, kind of a representative story of so many people and I also wanted to talk about larger things. So I was hoping to go back and forth between their picture and my picture.

Is there any positive side to the gentrification that affected Williamsburg? Or was it 100 percent a complete disaster?

I would say it was a complete disaster. The city made their case for why they did it: they talked about buildings that were not in good condition anymore, about people that weren’t happy living there because they didn’t have enough services. If you look at it that way, then all the fancy new buildings and shops look like an improvement. But if you look at the situation from the point of view of the people that lived there, well, Williamsburg is nothing more than an artificial world of steel and glass. The vast majority of people were really happy with the neighbourhood. Maybe they wanted few more shops, a better subway service and less noise from the trucks making deliveries late in the evening; they were definitely a few things that could have been improved and this is precisely what the local community plan addressed. But the way the city did it just meant driving people out, and to me this is not an improvement.

One other nice thing about Williamsburg was that it was a mixed community. Although it wasn’t racially mixed ­– there was a very recognised problem of Polish and Italian landlords not renting to black people – it was mixed culturally and economically with Hispanics, Polish, Italians. None of this survived. The neighbourhood is now a gated community, a very monochrome and monocultural community.

Talking about racial issues, Bed-Stuy, the neighbourhood you are living in, is home to a very large black community and is undergoing gentrification as well. What are your thoughts?

I think Bed-Stuy is definitely in a process of changing. It is a neighbourhood that has changed before: it used to be a largely Jewish neighbourhood, then it was German, and then it became a black neighbourhood. This is true in New York, that neighbourhoods go through transformations. In Bed-Stuy the change was partly as a result of what the banks did during the housing crisis. They focused their attention on the bad mortgages and started with the most vulnerable communities – first the elderly, then the black community. The banks came in and made it so all those people could no longer afford to live in their homes, which is why more properties have become available.

At one point in the movie, you show a rich couple that moved into the fancy new Williamsburg. You almost hold them responsible. Could people stop gentrification by simply not moving somewhere?

I suppose that’s possible, but I don’t think that would ever happen. People go to where they see an advantage for themselves. One of the things that happened with Williamsburg is that a lot of the property was sold to people who moved out of the city and wanted to move back in, and also to foreigners who wanted a “pied a terre” in New York. People moved away from New York because it dangerous and expensive; it has bad schools and they wanted a quieter life. Then Bloomberg made these quiet pockets that almost seem like the suburbs and all these people want to move back. They will not have the moral sense not to do it. They will move back in.

At some point in the movie, one of your friends says: “It’s the beginning of a new era.” Is gentrification, to a certain extent, unavoidable?

I did a screening in Toronto and the discussion afterwards was with a major developer, a journalist, and me. In the audience there were many artists who had lived in a building that was torn down and replaced by luxury condos. The developer’s argument was that there are many people moving into Toronto and they also need a place to live. “This is inevitable” is the term he used. He constructed a scenario in which those people, whoever they are, have to have a place to live, and it’s an obligation to build it for them. And somehow the people who had lived in the place where he is building it don’t need a place to live.

My feeling is that if I took the risk of moving into the place I moved into and spent my own money and effort to make it a good place to live, I should be allowed to continue living there, because I have contributed to the city. But this is not respected. So no, I don’t think gentrification is unavoidable. It’s just that someone sees it as a good way to make a lot of money. It’s just capitalism: if you can’t afford it, get out. A small shop owner in Williamsburg pays today $30,000 a month in rent. How is it that a city decides to let things go to the point where the only businesses that can afford the rent are those that charge a huge amount of money for services and products that only the very rich can afford?

Many people compare what’s going on in Berlin to what happened in NY. Is Berlin doomed to suffer the same destiny?

I guess it might happen in the same way. New York witnessed several huge gentrification changes, and in all cases the amount of money and political power behind those changes was so huge that no matter how hard the local community had tried, it could not win. So if the local communities in Berlin face as much money and power, then I would say they will not win. This is a very sad statement, but there is some humour in it as well. With my movie I begun by being very angry and very sad, but my partner has a different way of looking at things. She came in and said I will never be able to convince anybody with anger and sorrow, so I put humour in the movie. I think if nothing else at least you can and should laugh about it, because it all seems so preposterous.