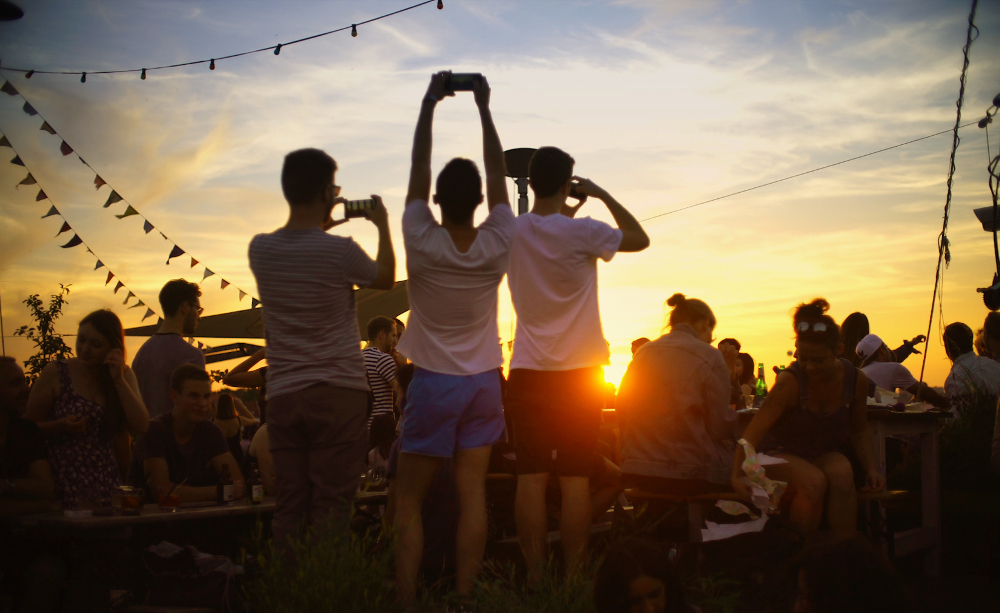 Munich-born, London-based filmmaker Johannes Schaff made waves on the international festival circuit with his 2016 documentary Das Wassup, an intimate portrait of lesbian hip hop outfit Yo Majesty. Hitting selected screens this week, his new feature Symphony of Now is a wordless portrait of Berlin nightlife, conceived as a spiritual sequel to Walter Ruttmann’s 1927 silent classic Berlin – Die Sinfonie der Großstadt. This new film is far from silent, driven by a propulsive electronic score curated by Frank Wiedeman, co-founder of influential local music label Innervisions. Schaff pairs this hypnotic soundscape with imagery that evokes the hedonistic spirit of the city without resorting to cliché. The result is an accessible, entertaining slice of experimental cinema that’s well worth an hour of your time.

The film really captures the spontaneity and unpredictability of Berlin at night. How carefully planned was your shoot?

It was a real mixture of planned and unplanned. To make a film about Berlin at night, there are of course certain boxes that you need to tick. If you want to shoot inside a club, this requires a lot of planning and entails agreeing to certain conditions. But it was really important to me to capture a sense of spontaneity. So I went out almost every single night with my camera during the shoot. If I didn’t have something specific planned for the week, I’d simply cycle around and see what I could find.

Did you capture anything that you’re particularly proud of during these unplanned trips?

I really like this one long lens shot we have of Oberbaumbrücke – there’s a small crowd watching some dancers, and it looks just like this breakdancing sequence in Flashdance! There’s also a scene with a guy doing tricks on his skateboard while being pulled down the street by a dog. It looks great and I was just lucky enough to be there at the time.

How long was the shoot?

I started on May 1st, and shot pretty much every day for the next three or four months. The aim was always to tell the story of a single summer night in Berlin, so we had to stop once the leaves started to change in September. By the end, we had somewhere between 80 and 100 hours of footage.

Some of the city’s venues are famously averse to being filmed or photographed. Was it tricky to get access to authentic nightlife?

I expected some resistance, but I was surprised how reluctant some people were to even discuss the possibility! I respect underground clubs that ban photography because they want to be safe havens, but big cultural venues were often just as unwilling to get involved. I was really set on filming inside one of the opera houses, but they wanted to charge an extortionate fee. And I got pretty much the same response from a punk venue in Kreuzberg – it was quite funny to experience the anti-establishment behaving exactly like the establishment! But once we got some venues on board, others followed. And individual people were generally happy to be filmed.

Did your own relationship with the city change much over the course of filming?

I last lived here about 16 years ago, but I visit about once a year, so I’ve seen the gradual changes. I was still surprised by just how different it was once I actually moved back to start filming. At first, it was like falling in love all over again – it felt so international, so free, and the weather was great. And then the project became difficult and it turned cold and I caught myself thinking “fuck this city” on several occasions! I was definitely impressed by how much more multicultural Berlin has become, and disappointed by how the gap between establishment and anti-establishment seems to have closed. But overall, I still love it like I did when it was home.

You do a good job of avoiding clichéd imagery. Was it a priority to deliver a personal portrait of the city?

I knew right from the beginning that I would never please everyone. During the shoot, whenever I explained to people what we were doing, they’d always say “you have to go to this place”, and it was always somewhere different. The relationship you build with your city is inherently personal, so I didn’t give too much thought to placating other people. And it was important to me to avoid postcard imagery. The Brandenburg Gate is pretty, but I’m German and I have to admit I don’t really know why it’s there, so I think that, to many people, it doesn’t actually mean anything. Another characteristic of postcard views is that they’re often shot from a dramatic angle, whereas I wanted to shoot everything from a human perspective – pretty much everything in the film is presented at eye level.

The film’s biggest talking point seems to be its original score. How did this come about?

We were lucky to have Frank Wiedeman as our musical curator. His goal was to assemble a cast of musicians from different generations and musical styles which represented the diversity of electronic music in Berlin – from Alex.Do, a young guy producing house and techno, to Hans-Joachim Roedelius who’s in his 80s and still doing really experimental work. The scoring process was really unconventional. The producers wanted the original Sinfonie der Großstadt to resonate through our film as much as possible, so each musician was allocated an act from the old film and asked to compose something based on that. Then I was presented with a complete score before editing, and I cut the entire film to this.

But visually, there’s quite a difference between the two films.

I read some of Walter Ruttmann’s notes, where he describes hiding and shooting people like they were his prey. So what you end up with is a somewhat fascist perspective of people – anonymous hordes, shot from far away. I thought this was a bit alienating, so it really reinforced the idea that I wanted to shoot from a human perspective and meet people on their level. I was partly inspired by Ghost in the Shell – the original anime, not the Scarlett Johansson version! There’s an amazing montage of the city that avoids unnatural angles. It’s all eye-level views, so you really feel like you’re there.

Symphony of Now opens in Berlin cinemas on July 12. Check our OV search engine for showtimes.