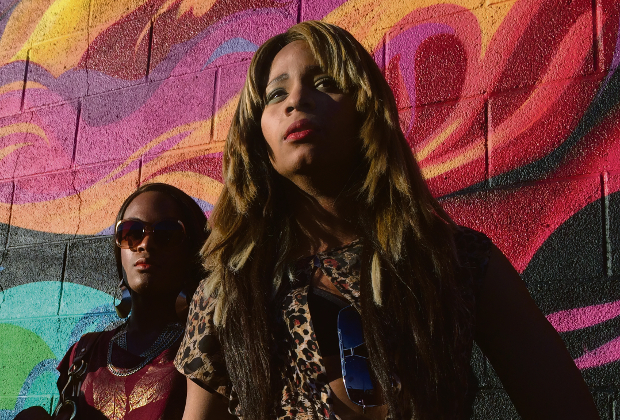 Sean Baker on the unexpected advantages of shooting his entire movie, Sundance darling Tangerine, on an iPhone 5S.

While an indie flick created with a smartphone might sound like a millennial art school project, the writer/director managed to turn in a gimmick-free, distinctly fabulous and heartfelt look at the hustle of trans working girls in Los Angeles – fears, flare-ups, friendships and all.

What did you do to capture the world of two transgender prostitutes so accurately?

We began this process without knowing what the script or storyline would be. The idea was to hear enough stories from the neighbourhood, and then pick one to fictionalise. I met Mya [Taylor] at an LGBT centre a block away from the corner of Santa Monica and Highland – she was standing in the courtyard and caught our attention. A few weeks later, she introduced us to Kiki [Rodriguez]. We sat down at a local fast food restaurant and just heard story after story from them, and asked them to be in the film.

How did your two leads contribute to the script?

Nothing was really sticking with us in terms of what could be the main drive for the film until one day, an unfortunate situation happened to Kiki. Basically, she came in quite upset because she suspected her boyfriend had been cheating on her with a cisgender woman. Kiki would never do what Sin-Dee did in the film, but we used the situation as a launching pad and said, “What would happen if a character like Sin-Dee found this out? If she was looking for this woman, where would she look first?” Kiki said something like, “Well, she’s a prostitute, so she’d probably be at one of those makeshift brothels down on Vine.” And we said, “Perfect. What goes on after that?” When we started shooting, Kiki and Mya brought their own experiences to the table in terms of telling us how accurate things were and sometimes changing the language – the slang and the terminology had to be up-to-date.

You’ve said you were immediately drawn to Mya – what was it about her that was so special?

That’s the hardest thing – it’s this thing called the “it” factor, a combination of persona, physicality and energy. And her willingness to be open and tell us about her world was a major deal. To tell you the truth, at the time, Mya didn’t fancy herself an actress. She thought of herself as a performer focusing on music, which is why we wrote in a scene with her singing.

One of the main storylines in the film revolves around Razmik, an Armenian cab driver who is dealing with his own secrets and sense of isolation. How did you build that narrative?

Basically, we knew the Armenian population in LA is quite large and quite underrepresented. And we found out that johns come in many shapes and forms. Sometimes, they’re police officers, sometimes they’re urban husbands, sometimes they’re cab drivers. It became a parallel story line of infidelity. We knew we were going to cast Karren Karagulian – we use him in every film (Starlet, Prince of Broadway), no matter what size the role. He’s a good friend of mine, and a wonderful, underrated actor from New York. He’s sort of become our good luck charm.

Did you and your team have trepidations about shooting the entire movie on a phone?

Looking back on it, I may have been the most nervous. In the beginning, it felt to me like it was going to be a step back. But our producers – Darren Dean, Shih-Ching Tsou and Mark and Jay Duplass – were very supportive of the idea. Eventually, I think it was mostly about convincing myself, and once we committed to it, I thought, “We have to take this very seriously and think of this tiny smartphone as though it’s as precious as a 35mm.”

So if you could go back in time with a massive budget, would you still have used an iPhone?

I’m my own worst enemy. In the moment, when you’re shooting, you’re always like, “Look at Tarantino! He gets to use 70mm; that’s not fair!” You always want to use as many toys as possible and shoot at the highest resolution. So who knows, if I went back in time and had the choice… I don’t really know. I will say that shooting on an iPhone helped in so many ways in terms of lowering inhibitions and loosening up a lot of the first-time actors and non-professionals. There wasn’t that intimidation factor, and that totally changed how the film was made. I don’t want to become the smartphone poster boy. But I feel like the project has to determine the medium. If I made a documentary, I’d use a smartphone – there’s no reason why I wouldn’t.