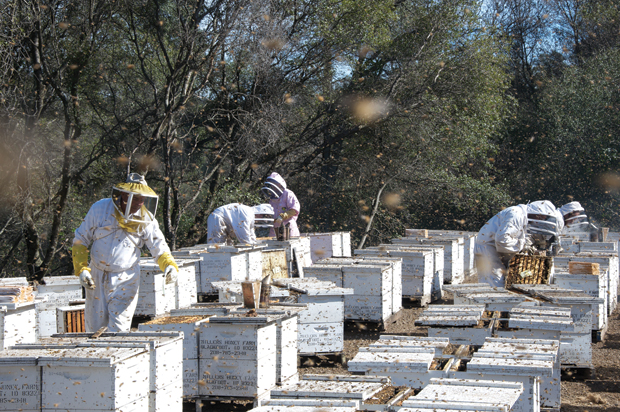 Swiss director Markus Imhoof on the essential beauty of bees

As pollinators connecting the dots on the world’s nutritional infrastructure, bees are indispensable. We lose them at our peril – yet seem blithely unconcerned at the decline in their numbers. Previously known for feature films (The Boat is Full, The Mountain), Imhoof’s stunning documentary More Than Honey (see review, left) goes a long way towards remedying our ignorance.

My grandfather was a beekeeper. He had a canning factory and big gardens with fruits and berries. When he was old, and lived in an old house with a beautiful garden, he still kept bees. It was a kind of a paradise. My daughter and my son-in-law are bee scientists so I’m very well informed. But if you ask somebody on the street, they don’t know that one-third of everything they eat derives from work done by bees.

Do you believe Einstein’s quote – “If bees die out, man will die out four years later?”

Yes. Regardless of whether Einstein said it, it shows how important bees are in nature, as pollinators for all the things we like to eat, for the staples and what we need to stay alive. In Switzerland there was a 70 percent loss of bees, in America there were 30 percent losses, and Germany too. It’s becoming a larger problem.

What are your views on hand pollination?

It was just a view I chose – of what would happen if we didn’t have any bees. I travelled to four farms in China where they were doing hand pollination. I chose one employing mainly women.

Explain the filmmaking techniques you used.

For the close-ups, the tracking of the bees, the microscopic views of inside the hives… it was important to see that it’s not only humans working with bees. I wanted to give an inside view. In Austria we had a bee studio and a big field with 15 hives of different races. We did the micro shooting, and nothing else, for two months with a bee whisperer who took care of the bees, helping us catch the right moment. We had very sophisticated endoscopic micro lenses normally used for medical operations and small helicopters with a camera for the flights. We filmed in the hives themselves at 70 frames per second, which is three times slower than normal so that you can really see what’s going on. Otherwise it would be too quick.

How long did it take to make this movie?

Five years, shooting for 100 days over a period of two years, which was a lot for a documentary. Each thing happens only once with the bees. You have to be there when it happens: when the almonds are in flower you have to be there on the 15th of February. Spring in general is the most important time for bees because a lot of things are ovulating. If you are not there you have to wait another year. We travelled to and from a lot of the places for certain moments in time for the bee processes.

Bees or humans – which are more difficult?

The beekeepers accepted me because of my grandfather and my daughter. But with bees – you can’t give orders. You just have to be patient. The language of bees is smell, so we had to seduce the bees with smell. Of course the bee whisperer was very busy.

More Than Honey opens in Berlin cinemas on November 8. Check our OV search engine for showtimes.