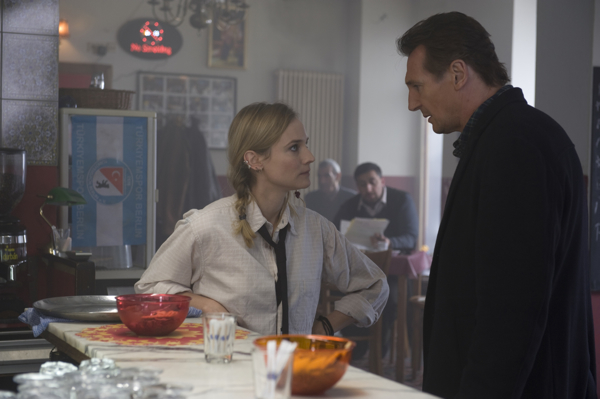 “This is the way the world ends, Not with a bang but a whimper,” a wise man once wrote – well that really encapsulates Unknown, the utterly shit action thriller that closed this year’s Berlinale. That’s slightly ironic, because the film includes a couple of very loud bangs, most notably when the Adlon hotel goes up in smoke at the film’s ludicrous climax.

In fact, by the time Liam Neeson and Diane Kruger are done, most of Berlin (where the film is set) lies in ruins – both physically and reputationally – I know that’s not a word. Not only do this pair of actors smash through walls, trams, and hotels like a pair of leaden wrecking balls (much in keeping with their acting style), the film portrays the city as a den of sex hotels, dirt, Stasi operatives who still pine for “the good old days,” and criminal immigrants.

But the slur that most bothered me was Kruger’s casual remark on entering her flat that “the walls are made of cardboard.” As if to hammer home the point about Berlin’s building standards, Neeson throws the next available thug through one of her walls. Frankly, this is very offensive, especially as they are meant to be in a Kreuzberg Altbau.

Berliners should really boycott this film. But it doesn’t matter much, because Unknown is exactly what this steaming turd will be within a week of its release.