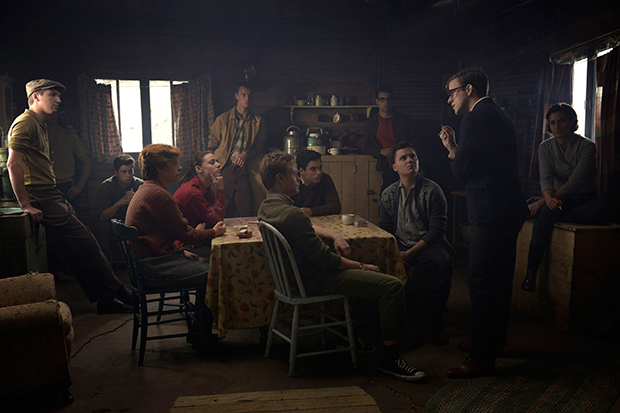 To dip one’s toe into the Generation 14+ programme is to enter a world of teenagers on school trips: the theaters reek of Axe deodorant and are filled with giggling from the first frame to the last. Trying to win a singing competition, pining for “the one”, fighting against a wizard – these are the kinds of adventures today’s generation wants to see. Nothing new.

But when I went to see Corbo at the Haus der Kulturen der Welt, people were tripping over themselves to see some guy from ABBA. Clearly a different world.

Corbo is set in 1966 and follows the interests of young people several generations ago. Jean Corbo, 16-year-old son of Italian immigrants in Québec, discovers his passion for the liberatión populaire, the armed struggle to rid the country of the anglophone colonizers and all forms of oppression.

When we see the swarthy heartthrob glancing nervously at a young female accomplice, the scene could be from any teenage film – except the context is discussing Frantz Fanon, painting graffiti against scabs and eventually placing bombs. The characters distribute La Cognée, the mimeographed, illegal newspaper of the Front de Liberatión du Québec, at school – and passages from the actual newspaper are used as voiceovers for a haunting sense of reality.

Yet director Mathieu Denis made a fateful artistic decision to leave out any scenes of mass struggles in favor of a “character study”. Jean’s radicalization fundamentally takes place while reading, far away from mass demonstrations, riots and strikes. His development is based on conflicts with an authoritarian father and teenage angst – such banal stuff that one wonders why he becomes a terrorist rather than, who knows, starting a band.

This attempt to portray the revolutionary as an individual separate from the revolutionary movement is deeply unsatisfying. Jean, rather than an agent of social change, looks like a pawn of lanky intellectuals with sport jackets and cigarettes, happy to send young people on deadly missions while holding themselves in the background (kind of like Reg from the People’s Front of Judea, portrayed by John Cleese in The Life of Brian).

In one early scene, the protagonists of Corbo go to a cinema to see The Battle of Algiers. This masterpiece from 1966 also shows revolutionaries placing bombs in a struggle for national liberation, but director Gillo Pontecorvo took the opposite approach: We learn almost nothing about the protagonists as people – but we don’t care either, since we feel the burning passion for justice that allows them to sacrifice everything. This cinematic nod, unfortunately, just shows what a great film could have been made with the material. While The Battle of Algiers has immortalized the struggle for Algerian independence, Corbo will be stuck in the young adult shelf.