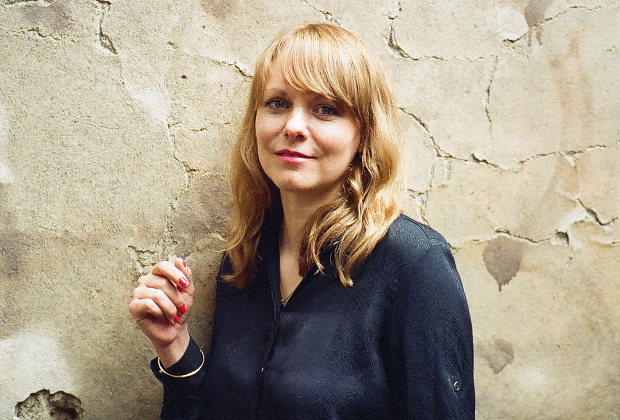 The director of Toni Erdmann, Maren Ade, talks about her prankster dad, sexism in the corporate world and how she ended up taking off her shirt on set (and immediately putting it back on).

It feels like an eternity since a German film scored so high with international critics and audiences alike at an A-list festival. At this year’s Cannes, they laughed to the point of tears and then cried out of emotion. Long standing ovations ensued. The “naked scene” will remain in the annals as one of the festival’s most commented and memorable sequences ever. That Toni Erdmann, this year’s film of all superlatives (most unexpected, wackiest, funniest…) came from a German director very few knew about was no small surprise. Equally surprising was the fact that Maren Ade left without a major prize. The film was nonetheless snatched up by distributors the world over, and is sure to run as the German film of 2016-17 wherever it screens. It hits cinemas in its home country on July 14.

This is a complicated film to sum up: basically, a scruffy suburban piano teacher with a weakness for practical jokes takes it upon himself to fix his estranged daughter’s life by crashing her tidy corporate routine in Romania. Your last film (Alle Anderen) dealt with a married couple; this time it’s a father-daughter relationship. What’s your fascination with family dynamics?

I’m interested in family as a topic. Families are more often than not such a static thing. Everyone gets their roles over the years. It’s so ritualised, it becomes so hard to break out. So from the beginning I had this idea of a father who’s a practical joker and uses his humour to redefine situations – sometimes as a weapon – in order to create a new way of communication with his daughter. Somehow it always starts with the character for me, not the story.

You’re rumoured to have a dad who’s into practical jokes. How close is the character of Winfried to your own father?

I did once give my own dad a set of fake teeth as a present, and he would pull them out to make jokes. He would just pull them out of the pocket of his trousers. In the film I had to put them higher, in the breast pocket of his jacket – so that we can see or guess that they are there all of the time. They’re always involved in the film, even when he doesn’t wear them…

Ines, the daughter, is an international consultant based in Bucharest. Why choose the corporate expat world?

Imagine the sound guy running around naked. We’d just have been laughing the whole time!

I wanted her to have a job I have nothing in common with. The characters of my last film were closer to my world – it would have been boring to have these creative people again! So I started meeting a lot of women my age involved in the business world, and that’s when I realised how much “performance” was involved. This suited perfectly the character of the father, the performance artist. I actually did some research on comedians like Andy Kaufman, whom I really, really like.

Is this film a commentary on how embarrassing parents can be?

Our parents are something very private… In the film, it’s actually very brave and nice of Ines to take him along to that embassy reception. She doesn’t shy away from showing where she comes from. You can always change your life, your boyfriend, your job… you can create roles, but you can’t change where you come from. And sometimes you’d rather not show your parents to people – because it’s mixing two worlds that don’t necessarily fit together. Her world is all about status. At least [colleague and lover] Tim’s parents are BMW car dealers – it’s half-respectable. But Winfried is a simple music school teacher, very far from her world.

Every parent goes through the strange experience of being embarrassing to their own children. Have you experienced this as a mother yet?

One kid is too small, but yes, my eldest already says “Mama!” with that reproving tone. He’s four years old, and I’m already embarrassing him! There’s this ambivalence. You love your parents, but sometimes you need them out of the picture. The thing is that your parents “know” you so well, and sometimes you want to be someone else…

Maybe it’s the right point to explain that the “Toni Erdmann” of the title refers to a buck-toothed, wig-clad alternate persona played by Winfried to get to his daughter. How did this character come about?

From the script we knew there would be that transformation element – he’d put on a wig, false teeth and turn into a “coach”, but  we only really found Toni during rehearsing. The most difficult part was to maintain the right balance between the father and his alter ego. Peter [Simonischek] plays Winfried, not Toni. It was crucial that you always see Winfried behind Toni, that he should never come across as my invention, but Winfried’s invention – otherwise you’re just thrown out of the film. It wouldn’t work.

Your description of the expat-local  dynamic in Bucharest is very credible.

I did my research. I went to Bucharest several times, spent maybe two months there altogether. I was also interested in how all those weird international hierarchies and stereotypes played out there. Like, “We Germans have the know-how – we’ll teach you how it works.”

No, she apologises for her husband sending Ines shopping with her. “I know you have a lot of work.” I think she’s an intelligent woman. 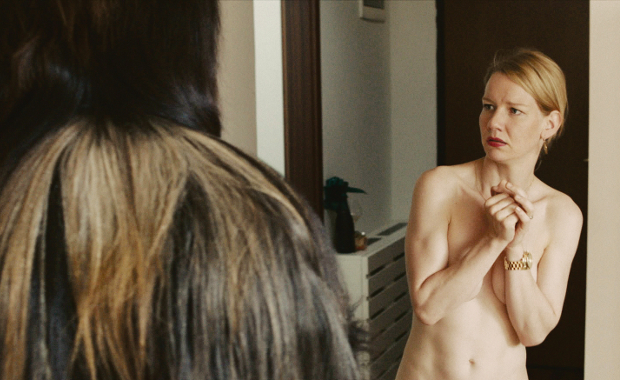 Meanwhile, the men in the film mostly come across as dicks – it’s an unpleasant, sexist world you’re showing.

I think it’s much worse in reality! Most businesswomen I talked to try to laugh the sexism away. They often try to go along with it, to belong to this men’s world – which is not always a bad thing. Sometimes it’s nice or interesting. But I guess in the film Ines reaches that point where she gets frustrated. It was easy for her to climb the hierarchy until she’s at the same level as her colleagues… but not higher.

At one point, she tells her boss, in all seriousness, “I’m not a feminist, or I wouldn’t tolerate guys like you.” She’s right – she’s not one. She’s in between. I wanted her to be in that conflict. The longer she’s in the job, the more she gets annoyed by some aspects… but for example, when her boss sends her to shop with his wife, she doesn’t say no. She goes along with it. She could have refused. It’s her choice.

Is the famous nude scene a feminist move? Ines’ impromptu decision to turn her brunch into a naked get-together is such a brave act…

On her part, it’s definitely a feminist move, and I’m happy you can read it as a feminist scene. But for me, it’s more complicated. It’s  an act of desperation, and it’s also  an accident. If it were just a feminist “fuck you”, she would have done it right away. So I tried to be as precise as possible in the way I built up that scene. The scene is long, so I took my time. I wanted to show the growing frustration, the dress she can’t put on, the annoying girlfriend…

Sandra Hüller is amazing. Was it difficult for her to play such a long scene totally naked? Did you all go FKK on set?

[Laughs] I offered it, actually, but she was like, “No, please don’t!” It would have been much worse! Imagine the sound guy running around naked. We’d just have been laughing the whole time! And Sandra was totally fine with it – we also agreed that it would be much more uncomfortable if we had a closed set. I actually once took my shirt off as a solidarity joke, but Sandra started to laugh so hard that I had to put it back on!